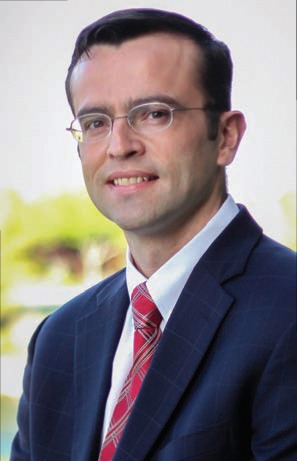 While being included in the inaugural edition of Emerging Leaders may have been a surprise, Michael Bond, vice president of corporate finance at Boyd Gaming, is deserving of the honor. Bond has a laid-back attitude—“I am just a guy who loves his job,” he says—but credits a lot of his success to thinking creatively about problem-solving.

Bond has a natural ability to focus on doing every step in a process well, no matter how important or mundane. This attention to detail has allowed Bond to rise through ranks at Boyd Gaming. He started as an internal audit intern in 2002 and today leads a group of motivated employees in his current role, which was made official in 2013.

In addition to working with the right company at the right time, Bond credits his success to working hard and focusing on doing each job well.

“Throughout my career, I have focused less on ‘climbing the ladder’ and more on doing the task at hand as well as possible,” he explains.

That thought process combined with working alongside strong mentors within Boyd Gaming—including CFO Josh Hirsberg, Vice President of Internal Audit Paula Eylar and CEO Keith Smith—has allowed Bond to grow and prosper in his career. Along with his own career path, Bond has paid attention to up-and-comers in his company and the industry.

As a VP over the past six years, Bond is playing a leading role in making sure that young professionals have the advice, support and space to grow in the industry and become very successful. “Seeing young, hard-working kids quickly grow into talented and respected professionals is the most rewarding thing I have done in my career,” he says.

In addition to being a strong mentor, Bond also pays attention to trends and areas of growth in the industry for both established leaders like himself and emerging leaders. In addition to the obvious growth areas of international expansion and online gaming, Bond has identified another key area of growth: game design.

“Although I work for an operator, there is a real need for a renaissance in game design over the next decade. I think a few young and talented creatives will revolutionize the casino experience by taking game design to the next level,” Bond says. “New game designs will appeal to younger customers and demographics, which is a necessity for the gaming industry to thrive over the next 10 to 20 years.”

Over the next 12 to 18 months, Bond says he is excited to take the lessons he has learned throughout his career and begin to make a positive and lasting impact on the financial operations of Boyd Gaming.