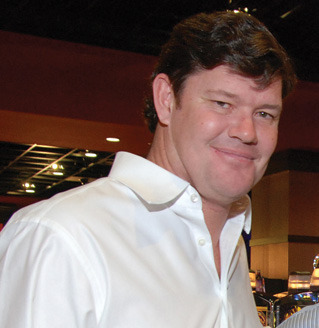 Recent moves by Australia’s James Packer and companies controlled by him have got observers wondering as to possible actions the billionaire might be planning. Packer has increased his stake in Crown Casinos to 40 percent, giving rise to speculation that he could be planning to take the company private.

Although much has been made of the huge losses suffered by Crown in its U.S. ventures, the company is still stronger than many, according to a Bloomberg article. In August, Crown reported net debt of 0.9 times earnings before interest, tax, deprecation and amortization. That compared with 4.6 times for Wynn Resorts, 8.4 times for MGM Mirage and 9.9 times for Las Vegas Sands.

“We see Crown’s strong balance sheet as a significant advantage in the current environment and believe it has the potential to provide substantial growth opportunities,” Harry Theodore, an analyst at Royal Bank of Scotland Group Plc, said in an October 12 report that recommended the stock as a buy.

Stephen Bartholomeusz of Business Spectator acknowledges the going-private scenario but sees another possibility in a further expansion of Crown in the direction of troubled Australian casino and betting firm Tabcorp.

Bartholomeusz believes that Tabcorp’s “crisis-level” share price of A$7 reflects the future loss of a crucial gaming license in 2012, increased competition from online betting operations and higher fees in the case of another license, and an investment of A$500 million in its Star City casino. Crown and Packer could add Star City in Sydney and Tabcorp’s Queensland casinos to Crown’s Melbourne and Perth casinos, instantly doubling the number of states in which the company is active.

“There are a hell of a lot of companies in trouble and someone like Crown can do well out of it,” Cameron Peacock, an analyst at IG Markets in Melbourne, told Bloomberg. “They have recapitalized themselves and could be looking to buy some distressed casino assets at distressed prices.”