Fixing Carcieri will be difficult 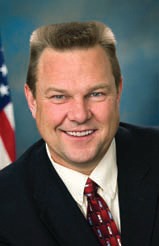 The newly installed chairman of the U. S. Senate Committee on Indian Affairs, Jon Tester, says “fixing” the 2009 Carcieri v. Salazar U.S. Supreme Court decision will be tough, but that it is one issue that he is focusing on.

Tester, a senator since 2007, inherited the chairmanship from Senator Maria Cantwell, who gave it up after a year without passing many bills. Tester has already passed 15 pieces of legislation through the committee since taking up the gavel.

In July he waas holding hearings on Carcieri as well as Indian gaming. He says that his biggest challenge is not to try to force too many bills through at a time.

“I think we are in pretty good shape,” he told Indian Country Today. “We have pushed a lot of bills out of the committee. We really have taken some of the less controversial bills and moved down the line. I think our next challenge is taking the bills that we’ve gotten out of committee and the ones that don’t get taken up by unanimous consent, figuring out a strategy for the lame duck. Maybe an omnibus Indian bill going forward that could include a lot of stuff, including, potentially, a Carcieri fix.”