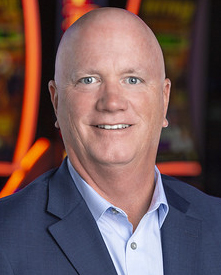 Tom O’Brien was named president of Aristocrat for the Americas and the EMEA region after spending two years as general manager of the company. O’Brien has a long history in gaming, starting as an operator in Atlantic City and later moving to the supplier side. In addition to Aristocrat, he has held senior roles at Interblock and Scientific Games. He discussed his new job with GGB Publisher Roger Gros at the Aristocrat headquarters in Las Vegas in April. (See video below)

Congrats on your new role as president of Aristocrat. Give us some idea of your responsibilities in this role.

The roles and responsibilities have changed dramatically. As general manager, I was pretty much doing customer relations. I would visit the customers and talk to all the bigger customers we had. I’d take Hector (Fernandez) to introduce him because he was primarily new to the business. So now Hector moves to CEO of land-based gaming. I move into the president spot, and the responsibilities have changed.

This is your second go-around with Aristocrat. What convinced you to come back?

It’s a great story. I was asked to come back, and before I agreed, I was asked to meet Hector. I went out and met Hector for a cup of coffee for 30 minutes. It turned into three hours. So the rest of it was history. Hector and I started working together on March 2, 2020, and we’ve never stopped. We’re closer than we’ve ever been. Even when Covid changed things dramatically, it was a good time for us to get together and do all the hard work we did.

Even though the world shut down that March, Aristocrat did not.

We did not shut down design development. We didn’t shut down our service teams. As a matter of fact, we went out there and started talking to our customers about what we could do for them during this down time. How can we help you? Customers were scrambling to try and move their slot machines from rows of machines to pods. We were there to help them for that. And on top of that, our design development teams just kept on working tirelessly every day. And the proof is in pudding now, as you can see we keep coming out with product after product making the top 10, top five and even No. 1 in several categories.

Aristocrat has had a lot of breakthrough products in the past few years, such as the Buffalo series and Lightning Link. How important are those products to the success of the company? Is it the math?

They mean everything to us. Dragon Link is the No. 1 game right now. Our job is to keep giving the customers what we they want. So we keep refreshing those games and it seems to be working well for us.

As for the math, I’ve been doing this a long time, and everybody asks that question. What I’ve learned from this company is, it has a lot to do with game mechanics along with math. Math is one way to make your customers happy, but the game mechanics themselves have to be pretty exciting as well. If they’re not, you can usually lose a customer pretty quickly. We just continue making game after game and the customers seem to be enjoying it. So we’re happy about that.

How do you keep that innovation going? Is it all in the game studios?

I’d like to know the magic sauce myself. They don’t exactly give it all away to us. But I will tell you after being with the studios that they just don’t stop. Whatever they’ve done in the past, they look at it and say, how can we do a better job? Our studios are very intelligent. They test the games, put them out in the field, they see what the customers like, what they don’t like. And we try to help them with that commercially as well and give them the feedback that we get.