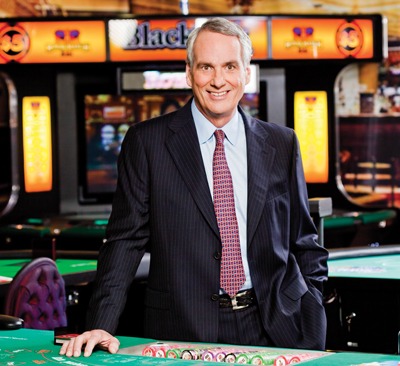 The smaller gaming manufacturing companies endured a tough time late in 2008 when investors turned away from all gaming companies. Shuffle Master Gaming, the leading supplier to the table-game segment of the casino floor, acted quickly to allay investors’ fears over the prospects for that company. The board hired Tim Parrott, most recently president of Aristocrat’s American division, and previously chairman of casino operator Boomtown Resorts prior to its merger with Pinnacle Entertainment. Parrott righted the ship, concentrating on customer service and cost initiatives that have created one of the most dynamic companies in the manufacturing sector. He spoke with Global Gaming Business Publisher Roger Gros at the Shuffle Master offices in Las Vegas in October. To hear the full interview in a recorded podcast, visit
www.ggbnews.com/podcasts.

GGB: You’ve been with Shuffle Master now for more than six months and the changes have been remarkable. Can you explain what you found when you came here, and what were the most immediate tasks that needed to be completed?
Parrott: I had known the company before, both as a competitor and as a customer. What I found
wasn’t much different from what I knew before I came aboard. It was a great company with a great suite of products and a lot of depth. What I didn’t realize was that there was a wonderful group of very talented employees who were very open to change and wanted to take the company to the next level.

I also found a need to focus on a number of things. It was basic business-blocking and
tackling-communications, cost controls, profitability, teamwork and more.

The roots of the company are, of course, the automatic shufflers. That market was splintered at one point, but Shuffle Master seems to have consolidated it again. Can you explain some of the other products that Shuffle Master offers to the gaming industry?
Shuffle Master’s genesis is obviously with the shufflers. But over the years, before I got here, the company necessarily broadened its offerings.

Since I’ve been here, I’ve encouraged Shuffle Master to use talented people, even if they’re not with the company, to bring in more products. Our electronic table segment includes iTable, TableMaster and more. And finally, our AGM segment, which started with the StarGames joint venture and is Australasian-centric now, will broaden quite a bit in the future.

We have four different product groups. Utility includes the shufflers, shoes, chippers, etc. Proprietary games is a growth area for us with Three-Card Poker, Ultimate Texas Hold’em and others.

Let’s talk about one of your most exciting new products, the iTable. Tell us exactly what it does and what it brings to a casino operation.
The iTable has more potential than anything I’ve seen over the last 20 years. And if it lives up to the buzz, we’ll be very happy.

It’s a hybrid of a live dealer, with traditional cards and felt, but then it includes a computer interface with the player, which allows them to play the game with virtual chips. They make all their bets with virtual chips. The game plays faster because there is no take-and-pay with the chips. Many prefer to play without the chips because they’re not dirty. The real driver is just that it’s a fun way to play.

Most important for the operator, it’s the first system as far as I know that gives you true player tracking down to the penny.

You’ve got a seasoned executive staff here at Shuffle Master. How important are the people that were here when you got here to the future of Shuffle Master?
I was very fortunate to inherit a great corps of executives and employees. They are very knowledgeable and passionate and are the reason this company is successful. They are the glue that holds it together.

Shuffle Master had a challenging financial state when you came aboard. What are some of the changes you made to make Shuffle Master more financially viable?
Fortunately, there were a number of initiatives that the previous chairman, Mark Yoseloff, had started before I got here-cost controls, restructuring the balance sheet and others. So we just accelerated those efforts, cost initiatives in operations and in the manufacturing side. We’re working on our balance sheet to reduce debt, which is actually quite enviable when compared to others in our sector.

Shuffle Master’s international market is growing quickly. What have you been doing to expand that part of the company?
We have subsidiaries in two regions: Star Games, which covers Australasia; and Card, which covers Europe and Africa.

We’ve been beefing up our operations on the Pacific Rim, particularly in Singapore, where we’ll be in the two casinos opening there, and in the Philippines and the rest of Asia. We’re doing well in Europe with Card. And Latin America is also a key growth market for us.

What is your vision for the future of Shuffle Master?
We’ll continue to see growth in the utility market, but that will be relatively flat since we have such a big market share. Our growth there will be in new casinos and jurisdictions.

Proprietary games has unlimited growth. It’s just limited by your imagination. The games we have can grow quickly and we’re always looking for more games that players enjoy.

The electronic table segment is probably the most exciting to me because there is such an opportunity for growth there.

And although we’re a niche player in the AGM market, there’s plenty of room for us to grow without competing with the major players, who do what they do so well.

So we’ll grow in all four segments, with the latter three growing more quickly percentage-wise.