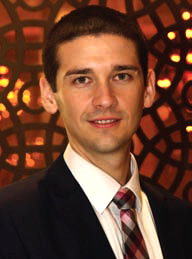 Before advancing to group head of commercial development and electronic table games at Crown Melbourne, Daryl Bruce long admired the lure of the property in his hometown, noting, “Crown is a genuine icon of Melbourne. Having grown up in this city, I was always fascinated by the mystique and glamour of the casino.”

Bruce began building his network in the gaming industry while studying at university, where he forged a friendship with a fellow student and Crown employee who suggested that there may be a role for him upon graduation.

“I was given the opportunity to prove the value of my math and stats skills with a six-month contract role in the gaming machines analytics team,” Bruce says. “You could say it was a case of right place and right time.”

Asked about industry trends relating to electronic table games, Bruce is keen to point out Crown Melbourne’s position at the forefront not only in the implementation of the latest games—currently featuring 660 player stations—but historically as a partner for game developers, citing, “When Rapid Roulette was created all those years ago, it was a joint development between Crown and Stargames, now part of the Scientific Games stable.”

Further, Bruce has been involved with developing original content that is now part of both the gaming floor he manages and other gaming properties.

“It was quite a buzz to see table games I invented installed on the floor here at Crown Melbourne last year—Dice Duel and S7REAK,” he says. “Crown formed a subsidiary by the name of Club Gaming to facilitate the sharing of our in-house game inventions with the rest of the industry.”

As electronic table games continue to grow as a product category, Bruce believes ETGs are uniquely positioned to serve VIP customers due to the relative privacy, comfort and convenience of the experience. Additionally, the category is a key acquisition tool appealing to the next generation of gamers searching for lower price points and the opportunity to sample and learn games without the fear of embarrassment. “These products appeal to the younger customer and could play a significant role in what many in the industry believe to be a ‘millennial problem,’” he says.

Bruce is enthusiastic about the future of gaming, and wants to see it thrive in the face of changing economic dynamics.

“There has never been stronger competition for discretionary entertainment spend, and the industry needs to keep up with the experiences and digital integration that customers are being offered by the competition,” he says. “This comes back to both the gaming experience itself and the complementary amenities offered.” His professional goal is to continue to grow into a general management role with full oversight of a casino property.

When he has time away from work, Bruce travels with his wife, having enjoyed ventures to Europe, Japan, Indonesia and the Maldives, with their next stops being North America and a return to Europe. He is an avid basketball player, one of his lifelong hobbies. He also enjoys cooking and cheering on his two favorite sports franchises, saying, “I’m a passionate supporter of the Collingwood Magpies in the AFL (Australian Rules Football), and also the Melbourne United basketball team in the NBL (the Australian National Basketball League).”