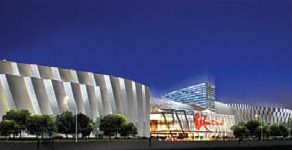 Genting America, the Malaysia-based gaming company behind the hugely successful racino at Aqueduct (above), is now pitching a billion convention center at the Queens complex.

The company wants to build a 3.8 million-square-foot facility with up to 3,000 hotel rooms in South Ozone Park, making it the largest convention center in the U.S. It would be known as the New York International Convention and Exhibition Center, or NICE.

New York Governor Andrew Cuomo announced his support for the project in his recent State of the State speech. He said the Jacob K. Javits Center on Manhattan’s West Side is too small and no longer competitive with convention centers elsewhere in the country. In the speech, Cuomo also announced support for an expanded casino industry in the state, with neither the number nor locations of the casinos specified.

In a letter to Assembly Leader Sheldon Silver and Senate Majority Leader Dean Skelos, Cuomo called it a “low-risk, high-reward business opportunity for the state.”

“The economic impact of the project would be enormous,” Cuomo wrote, “estimated to create thousands of construction and private-sector jobs. The state investment would be minimal with potentially the greatest number of jobs produced in the state in many, many years.”

But some worry the plan would deep-six plans for a Shinnecock Indian casino at nearby Belmont Park, and even force hockey’s New York Islanders to relocate to Quebec. The hockey team had considered building a new arena at Belmont if the Long Island tribe chose the site for its planned gaming hall.

Christian Goode, chief financial officer for Genting in the U.S., acknowledged that the company “would like no new competition in our immediate area. If somebody could come in and erode that market share, it would be problematic in generating an investment, given the capital intensiveness of building a convention center.”

Goode acknowledged that the firm is considering the plan and called it “conceptual.”

As for the timeline, the company says the first 2.6 million-square-foot phase could be completed by 2014 at the earliest, with construction of hotel rooms slated to begin in November 2015.