The Palazzo, the newest project by Las Vegas Sands, was officially unveiled in January, bring the company another luxurious product on the Las Vegas Strip. Together with its sister property, the Venetian, the company now offers more than 7,000 hotel rooms and suites at the corner of Sands Ave. and the Strip. Associate Editor Greg Jones explains why the Palazzo is the first of a new breed of casino resorts slated to open by 2011. 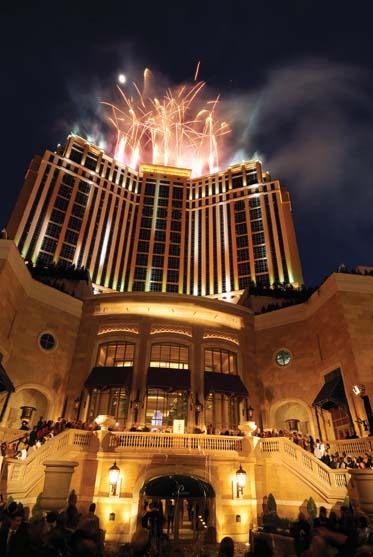 The opening of the Palazzo marks the first of a new breed of upscale, luxury resorts that are scheduled to come to Las Vegas over the next couple of years. The property includes a 50-story hotel tower, with more than 3,000 suites, a shopping center with an 85,000-square-foot Barney’s as its flagship, a 100,000-square-foot casino and 14 high-end restaurants spread across 6,948,977 square feet of floor space. With a cost of nearly billion, Palazzo completes a master-planned vision that, combined with the Venetian, brings the first meta-resort to Las Vegas.

Being on the leading edge of industry trends is something that sets Las Vegas Sands apart from other operators, said the company’s president and chief operating officer, Bill Weidner.

“One of the things we take a lot of pride in as a management team is doing things that are different and that set trends,” he said. “Copy is the sincerest form of flattery, and with $20 billion to $30 billion in large-scale projects like this coming down the line, we consider ourselves to be the first to develop these kinds of buildings.

“This marks the beginning of the meta-resort era that will take Las Vegas to the next level, and we’re kind of the first ones on that wave.”

The idea of building such an expansive casino campus-between the Palazzo and Venetian Las Vegas Sands has 7,000 hotel rooms and 200,000 square feet of casino space-is actually about 13 years old, according to Brad Stone, executive vice president of Las Vegas Sands.

When he, along with Weidner, Venetian and Palazzo President Rob Goldstein and Las Vegas Sands Chairman and CEO Sheldon Adelson, first started master-planning the property in late 1995, the goal was to get as many hotel rooms as possible at the intersection of Sands Avenue and Las Vegas Boulevard.

“The idea was to present two unique destination resorts to the consumer with a different front of the house and a different look, as well as to provide multiple experiences,” Stone said. “We never wanted Palazzo to be just an extension of the Venetian; we wanted it to stand on its own with its own character and look.

“Palazzo is about luxury. People come to Las Vegas to see things they can’t see anywhere else, and we feel the Palazzo delivers on that.”

The marriage of luxury and drama were key to Adelson. The Venetian is a romantic property, as he described it, while the Palazzo stands as an exciting ode to unabashed opulence. The reason for such is quite simple, Adelson said. He used a story about a wealthy man from Canada-who said if he lost all his money, the last thing to go would be his private airplane-to explain the reason his company caters to the wealthy.

With the economy slowing down, and some of the more dire prognosticators saying a recession is imminent, Adelson believes his properties will be insulated from the financial troubles of the hoi polloi.

“We didn’t want to focus on the mid-market because we felt the mid-market was so vulnerable to economic swings,” Adelson explained. “We wanted to stay at the high end because people who have money always have money.

“There are certain luxuries in life that people who can afford luxuries don’t want to be without, and one of those is when people want to go away and have a nice weekend, whether it’s to celebrate something or just to get away, they want to live luxurious. That’s who we built this for.”

For Weidner and Adelson, the project is as much a statement about the future of Las Vegas as it is about Las Vegas Sands itself.

“Las Vegas is our home base. As much as we are building in places like Asia and as much as we’re developing in places like Singapore, it’s still wonderful to come home and provide this kind of entertainment for not only the American people, but for people across the world.”

Adelson used fewer words to get to a similar conclusion.

Luxuries for the Few

With a hotel tower boasting nothing but suites-starting at $199 a night-more celebrity-chef-headed and high-end restaurants than any other property in town, a one-of-a-kind spa, and a high-end retail component in which only the biggest of the big spenders could afford to go window shopping, the Palazzo is truly in a league of its own.

On the dining side, Goldstein has added restaurants including CarneVino by Mario Batali, Table 10 by Emeril Lagasse, CUT by Wolfgang Puck and Restaurant Charlie by Charlie Trotter to an already impressive lineup including Dos Caminos, the Grand Luxe Café, Jade, Prime Blue Grille and SUSHISAMBA, to name a few. Between Palazzo and the Venetian, Goldstein said there is now dining for 10,000 people at a total of 29 restaurants. And next year, Las Vegas Sands is predicting $7 million in restaurant sales alone.

Those looking for a luxurious respite can visit the 134,000-square-foot Canyon Ranch Spa to take a fitness class, meet with a nutritionist, or relax with a massage and facial. The Canyon Ranch Spa will also bring the first European-style suite of thermal spas, tubs and bathing experiences to the U.S. with Aquavana.

For entertainment, Palazzo is tapping into proven commodities from New York, including the Broadway production and 2006 Tony Award-winning Jersey Boys and the 40/40 Club, a sports bar and lounge fronted by one of hip hop’s biggest moguls, Jay-Z. And the shopping experience (see right) will also be one of a kind.

When it all comes together, Goldstein describes it as “over the top, yet sophisticated.”

And, it’s something that Weidner says is indicative of a change in the traditional business model for Las Vegas, something that has been become more and more evident in recent years: non-gaming amenities are becoming increasingly important to the bottom line.

“It’s almost completely changed the other way from those things that the initial developers of casinos here in Las Vegas considered to be distractions-things like shopping and even televisions in the hotel rooms,” he said. “The idea of developing experiences around the casino, reasons to come that are not gaming-oriented, then gaming becomes just a part of the overall experience. Instead of being gaming-centric, it becomes resort-centric, or experience-centric.”
Calling Big Spenders
Palazzo Shoppes let you shop ’til you drop… a small fortune

The Shoppes at the Palazzo mark a growing trend of building luxury markets in Las Vegas, tapping into a market that, some would say, befits the new “democratic ideal of luxury.”

High-end retailers like Barney’s, which serves as the lodestar of the enterprise, are expensive but accessible, and due to celebrity endorsements like that of Sarah Jessica Parker, who famously said “if you’re a good girl and you work hard, you get to shop at Barney’s,” that just-barely-attainable taste of luxury becomes a part of the allure. Or the end-all, be-all for those more prone to the Frank Lloyd Wright style of living-the eccentric architect is quoted as saying, “Give me the luxuries of life and I will willingly do without the necessities.”

The 60 international boutiques at the Shoppes at the Palazzo certainly represent the luxuries much more than the necessities, but it all ties in with the market Las Vegas Sands Chairman and CEO Sheldon Adelson is aiming for. As Adelson said in the grand opening press conference, Palazzo and Venetian are luxuries and adult playgrounds for the wealthy, more than they are hangouts and getaways for the mid-market consumers.

So in addition to one of the premier department stores in the country in Barney’s, and its grandiose 85,000-square-foot floor space, the Shoppes also feature places like Bauman Rare Books-which carries 15th century medieval manuscripts alongside other items including the first newspaper copy of the Constitution and books once owned by Thomas Jefferson-and boutiques like Michael Kors and Diane Von Furstenburg.

The 450,000-square-foot ode to commercialism is owned and operated by General Growth Properties, the same company that owns and operates the connected Canal Shoppes at the Venetian, and will partner with Boyd Gaming to operate retail operations at Echelon. The Palazzo Shoppes are 90 percent leased, and while some retailers are bemoaning an economic slowdown-marked by the worst holiday season in five years-the boutique operators are counting on the largesse of the upper class, just like Adelson is with the property as a whole.

“The opening of Barney’s is very important to the property,” he said. “Clearly, it’s a statement that will reverberate in this town for years to come.”