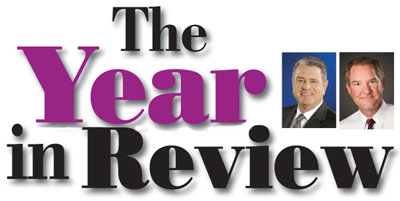 1: AGEM and its Members Step Up

The Association of Gaming Equipment Manufacturers tried to do its part to help ease the pain caused by multiple events that impacted gaming states and ultimately hit home in Las Vegas. Following the powerful impact of Hurricane Harvey on Texas and the Houston area and Hurricane Irma in Florida, AGEM contributed $25,000 to three relief agencies assisting those impacted. On the eve of G2E on October 1, the Las Vegas mass shooting left the gaming industry reeling. AGEM responded with a $50,000 contribution to the Las Vegas Victims’ Fund and challenged its members to add to that total—and they did, with $130,000 more for a total of $180,000 from suppliers as the fund ultimately reached $31 million.

The organization anchored by the big slot companies published the first AGEM Gaming Census in partnership with Eilers & Krejcik Gaming. The information in the census covers market-share slot data in a variety of categories and also includes updates on live and electronic table games and casino management systems. Future efforts will focus on increasing the sample size of roughly 370,000 North American units included in this first census.

AGEM signed off on the “business-first commitment” originally created by the American Gaming Association and Reed Exhibitions to reinforce the importance of professionalism at G2E. The pledge came after ICE organizers were forced to deal with companies who crossed the line with their marketing efforts and were exposed by the tabloid media at the annual show in London.

AGEM cultivated contacts and relationships on the ground in Brazil and Japan as both countries continued to debate the idea of legalized gambling. In Brasilia, AGEM sponsored the first Brazil Legislators’ Day. In Tokyo, AGEM attended the Japan Gaming Congress after previously providing specific input to the IR Promotion Committee formed to outline the enabling legislation aimed at bringing casinos to the country. Ultimately, Japan is moving forward with casinos while Brazil remains stalled.

The AGEM Board approved the contract renewal of AGEM Director of Responsible Gaming Connie Jones, and she had a very active year as AGEM continued to financially support a wide variety of organizations dedicated to responsible gaming initiatives, including the National Center for Responsible Gaming, the National Council on Problem Gambling, the Nevada Council on Problem Gambling, the Problem Gambling Center in Las Vegas and GamCare in the United Kingdom. As a specific example, the annual AGEM-AGA Golf Classic presented by JCM Global—with the 20th anniversary event taking place at famed Shadow Creek—raised a record $228,000 for the NCRG.

What has become known as “skill-based gaming” continues to evolve, with a focus initially on Nevada and its New Innovation Beta (NIB) program, along with New Jersey and tribal locations. AGEM provided specific input on proposed regulations in New Jersey, which created a category separate from its slot machine regulations, and to New South Wales as Australia, among other countries, begins to consider this new form of gaming.

AGEM has an introductory relationship with the nascent U.S. State Gaming Regulators Forum and has been participating in the AGA’s NextGen Working Group dedicated to general regulatory reform, and had specific interaction providing direct input to regulators in Nevada, New Jersey, New Mexico, Maryland, Michigan, Mexico and Macau, among other markets.

Along with operator-dominated trade groups APPJSAC and AIEJA, AGEM worked with regulatory agency SEGOB on updated language governing gaming in Mexico. The AGEM Mexico Committee represents all of the member companies that serve the overall Mexican market and was actively involved in creating the content for the First National Convention on the Gaming Industry that took place in Mexico City last October.