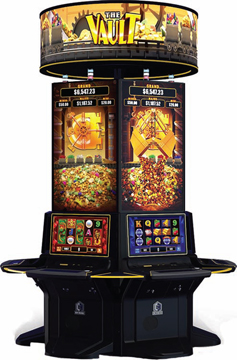 This video slot was designed for Everi’s Empire Arena, a circular banked presentation on which a community bonus takes place involving all players on the bank.

There are three base games—China Blessings, Egypt Gems and Vegas Luck. All are five-reel, 30-line or 40-line games, with the large top portrait monitor displaying an open vault with gold and jewels pouring down toward the reels.

China Blessings and Egypt Gems both feature a picking bonus. The player selects icons to unveil credit awards, “+3 Picks” or special symbols that accumulate all pick prizes and award them a second time. Vegas Luck features a free-spin bonus in which large portions of the reel strips are displayed on the top screen. When the feature is triggered, a wheel appears on the top screen, with concentric circles leading to a number of free spins and a number of wild symbols added to the reels for the feature.

All three games feature the “Empty the Vault Respin” feature, a lock-and-respin feature. When three scatter symbols are locked on the same column, they will increase in value on every subsequent spin. Treasure then falls from the top-screen vault onto the locked reels.

The main community feature, also available on all three games, is called Diamond Rush. All games on the bank will go into a three-minute “Diamond Rush” mode at the same time. All top screens change to a field of diamonds bearing credit amounts. During Diamond Rush mode, whenever a Vault symbol lands on the fifth reel of a player’s screen, it opens to reveal either a credit award or a diamond. If it’s a diamond, the player “steals” that prize from the top screen—and other players.