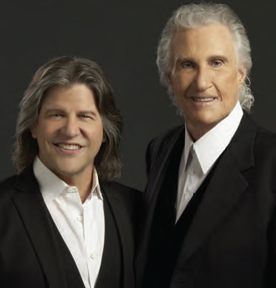 Rock and Roll Hall of Fame inductees the Righteous Brothers will be presented with a Casino Entertainment Legend Award at the sixth annual Casino Entertainment Awards (CEA) on Wednesday, October 10, 2018, 6:00 p.m. to 8:30 p.m. in the Vinyl showroom at Hard Rock Hotel & Casino.

In 1964, the Righteous Brothers duo of Bobby Hatfield and Bill Medley became the first rock ‘n’ roll act to perform on the Las Vegas Strip, performing three shows a night in the lounge at the Sands Hotel. Their distinctive blue-eyed soul hits “You’ve Lost That Lovin’ Feelin’” and “Unchained Melody” were No. 1 hits on the Billboard Hot 100, plus received Grammy nominations. “Unchained Melody” earned million-seller Platinum status. The Righteous Brothers toured extensively and performed up to 12 weeks a year in Las Vegas until the untimely death of Hatfield in 2003. Medley revived the duo in 2016 at Harrah’s Las Vegas with singer Bucky Heard. They continue to perform there. “You’ve Lost That Lovin’ Feelin” has become the most-played song in the history of American radio and television, according to music rights organization BMI.

Victor Drai is known as the father of the casino after-hours scene. Creator and founder of Las Vegas mega-clubs Tryst and XS, Drai is the visionary owner of Drai’s Nightclub, Beach Club, and After Hours at The Cromwell. In 1997, he opened the original Drai’s After Hours, a high-end restaurant and pulsating nightclub underneath the street level of the Barbary Coast Hotel & Casino. Drai’s was one of the first clubs to charge premium prices not only for cocktails and bottle service, but also for bottled water. An inductee into the Nightclub Hall of Fame, Drai is also a former movie producer known for The Woman in Red, The Man With One Red Shoe and the Weekend at Bernie’s films.

Casino Entertainment Awards also will be presented to artists, executives and venues in nine categories of casino entertainment, including a new category this year for Casino Production Show of the Year.

Complimentary tickets will be distributed to G2E attendees on a first-come, first-serve basis (subject to availability) on Tuesday and Wednesday, October 9-10, 10 a.m. to 5 p.m., at the Casino Entertainment Awards booth (5938) on the G2E expo floor at Sand Expo.

CEA finalist nominees, selected from more than 1,000 online nominations, include:

Casino Entertainer of the Year

Casino Comedian of the Year

Casino Musical Artist of the Year

Casino Production Show of the Year

Casino Entertainment Executive of the Year

Casino Showroom/Theater of the Year

Casino Arena/Amphitheater of the Year

Casino Booking Agent of the Year