How ‘Free’ Online Casinos Came Into Their Own

If you think about it, the term “social casino” is an oxymoron. Times two.

First, most social gamers are parked behind an iPhone or computer screen somewhere, all by their lonesome, even as they engage in virtual slots, keno or poker with their online “friends.” Not really very social.

Second, a social casino isn’t a casino at all, but a “freemium” version of same (though some players shell out plenty of dough for virtual coins, more playing time, digital tokens for pals and so on).

Whether the term is accurate or not, social casino games are widespread, wildly popular, and growing. According to a study by Eilers & Krejcik, the value of the global social casino market in 2018 exceeded $5 billion, growing 11 percent in the final quarter alone. That momentum is expected to increase, with some projections at 20 percent per year.

There seems to be room to grow—a 2016 Superdata report estimated there are 170 million active social casino players around the world, outnumbering casino gamblers four to one. Their favorite game by far is slots, and the player profile aligns with the casino slot demographic: mostly women, 40 years of age or older.

Online casinos became widespread in the 1990s, but were cut short in the U.S. by the Unlawful Internet Gambling Enforcement Act (UIGEA) of 2006, which sent most real-money operators packing. The free-to-play models that remained were perceived by some as a sort of placeholder until real-money games returned.

But they also proved to be a crackerjack loyalty and branding tool, and social casino gaming became an industry unto itself, a separate entity with a largely separate fan base—though there is “significant crossover,” observes Jeff Berman, chief commercial officer at social gaming supplier GAN.

“There will always be people who want to play socially versus people who want to play for money,” Berman says, “but with our partners who operate both simulated and real-money gaming, we’ve found that the two (models) are in fact complementary.” Based on a study of its social gaming clients, “the No. 1 reason (social) users say they play is practice.

“Social games are practice for their real-money gaming habits, whether online or offline. Qualitatively, when we talk to consumers they say, ‘I believe I get better at this, at slots and table games, by practicing online on social games.’”

GAN blurs the distinction by referring to social gaming as “simulated gaming,” and says it attracts a full spectrum of players—old and young, land-based and online, women and men. “We have plenty of cohorts who are male who are playing table games (and slots),” Berman says. “The pan-demographic is widespread, just like you see in typical gaming.”

Thanks to social games, he adds, “our clients get more players in their doors, and they’re playing more. So we have found conclusively, with our brick-and-mortar clients who use our simulated gaming platform, a very big lift of visits on-property from the cohort of their users who play online. And on-property, their ADT is also significantly more.”

Aside from practice, these players play to “scratch their itch when they can’t play at a casino,” Berman says. “Also, there’s plenty of data to show that the reason people don’t go play table games specifically at a casino is because there’s a lot of pressure. People don’t want to sit down at a blackjack table because they’re afraid of messing up the deck for other people. So learning and practicing online not only helps people get better, but more comfortable.”

For strictly social players, the appeal of the pastime is not gambling to win money but casual entertainment, interaction, competition and one-upmanship—bragging rights for topping the leaderboard.

The white paper Social Casino Gaming on the Rise by Alison Drain of the North Carolina Problem Gambling Program says social casino games are viewed as “a phenomenal tool” by industry leaders that “extends ‘the house’ to an online platform and creates a deeper relationship with customers, as well as driving visitation to the casino floor.”

According to one study, U.S. casinos showed an average 28 percent uptick in traffic to their properties from visitors to social gaming platforms.

Andrey Kuznetsov, CEO of Kama Games, disputes the view that social casinos are the open end of a sales funnel to get players spending online and on-property.

“There is no hard evidence to suggest that social casino gamers eventually migrate to real-money,” Kuznetsov says. “We may have some crossover in players who engage with both, but typically, our players aren’t that interested in real-money gambling.” He calls it “a well-known fact” that in free-to-play social games, only 1 percent to 2 percent of players actually pay. According to most reports, it’s advertising that pays the bills here, not the micro-transactions made by most social players.

Kama’s online social poker game, Pokerist, was played daily by some 630,000 people in 2018, up from 510,000 the previous year, Kuznetsov says, “and we were proud to report that we hit our 120 million-player milestone too. At Kama Games, we’ve reported growth for the last three consecutive years, and last year, we grew double that of the overall social casino market. We see no indication that this type of growth won’t continue into the near future.”

He agrees that people play games like Pokerist to sharpen their edge. “They have a love for poker and don’t want to have to risk large sums of money in order to enjoy the game, or want to learn how to play and practice when they have a free minute.”

Others gravitate to the social opportunities. “We’ve really focused on improving socialization in recent years,” says Kuznetsov, “allowing our players to connect with one another in a variety of ways, whether that’s through standard chat options, sending lavish or interesting gifts or in games like craps, players can even transfer a dice throw to another player. We believe these socialization opportunities create ‘stickier’ communities and are a significant factor in keeping our retention numbers high.

“Even without monetary gain, there’s still a thrill of the win when players emerge from a long game victorious over their opponents, but that doesn’t inherently translate into a sudden desire to gamble with real-world currency.”

Though users are rewarded with ongoing free virtual currency (VC) for various behaviors and activity, when the VC runs out but you want to keep playing, users have the option of paying for additional currency, says Berman.

“We have individual users at all our casino properties who monetize at a rate that would drop jaws,” he says. “And it’s important for casino operators to think of these patrons within the full holistic view of their VIPs. If I were to tell any casino that based on use some social players are spending $100,000, they would want to roll out the red carpet and make sure they treat this person appropriately.”

Keith Whyte, executive director of the U.S. National Council on Problem Gambling, says the organization “has some concerns about social casinos in general, in terms of consumer protection, age limits, the transition from social to real-money gambling and the use, abuse or misuse of social casinos.”

He doesn’t necessarily view these outlets as a snare for unwitting players, however. “These casinos are immensely popular. In some cases it would be silly to transfer (free customers) to real-money gambling, because the social casinos are making so much.”

That said, Whyte adds, “the burden of compliance” for age verification is “completely on the customer,” which could let underage customers slip through. In Whyte’s view, the social industry “basically said we don’t care about a small number of kids; they probably don’t have credit cards anyway.

“The big argument is that social gambling is arguably not legal gambling; therefore, no rules apply,” he says. “I understand where they’re coming from, but nothing prevents them from observing Know Your Customer (safeguards). Nothing prevents them from adding warning messages. I’m surprised regulators haven’t taken a closer look at social casinos.”

Meanwhile, it seems a sure thing that these games will become even more pervasive. “This is largely due to the advance of mobile technology and the popularity of social casino games on these devices,” says Kuznetsov. “In the digital age, most people have a mobile phone-to-hand 24 hours a day, and the advancement of mobile technology and internet coverage has been a strong driving force for all genres of online gaming, opening it up to a much wider audience. In fact, mobile games was the fastest growing sector of the overall gaming market in 2018, beating consoles, PC/Mac, and handheld gaming.”

GAN’s Berman says he is “always amazed” at how many casinos in the U.S. “haven’t done something in the social-gaming space.

“It’s a tremendous way to generate revenue, stay connected with your existing database and grow your database. There are still an unbelievable number of casinos who aren’t on board with this. I still go to conferences where the panel topic is, ‘Is this the right time?’ It flat blows me away. Forget about the money and revenue generation. Staying connected to your database is reason enough.” 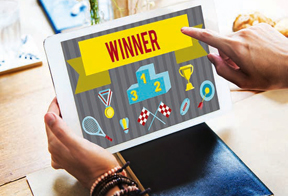 The cost of user acquisition in the social-gaming space is high in traditional traffic sources (Facebook, Twitter) due to strong competition, says Andrey Kuznetsov, CEO of Kama Games.

“To counter this, we are constantly exploring new channels where the potential competition is not as intense (for now, anyway) so the quality and the cost of traffic is still within what we believe are reasonable ROI expectations.”

As for player retention, “We focus on our own tried-and-tested monetization mechanics to not only retain current users but to also increase their lifetime value (LTV). And we use various channels and executions to retarget our lapsed players, too.”

Jeff Berman, chief commercial officer at GAN, says the company’s initial customer acquisition outreach “always starts with an operator’s existing database, especially those in their reward programs. They convert the highest. They monetize the highest. And again, it translates into more business on-property and a higher ADT.

“The social gaming category as a whole is highly competitive… If you look at the big independent social gaming companies (like Big Fish, etc.), they’re spending significant amounts on customer acquisition—literally millions per month… It’s extremely expensive and this is a very sophisticated audience. Players spend an incredible amount of time surfing, looking where to get more free coins. We work with all our casino clients to understand their appetite in terms of aggressively competing with those types of casinos in addition to focusing primarily on their local capture area and loyalty members.”

The ability to integrate loyalty programs into the social gaming platform is “absolutely key,” Berman says. “When you’re talking to an operator who already has a sizeable database, when they reward players further through social gaming websites in the same way they get rewarded for playing on-property, the conversion all up and down the funnel will really kick in.”