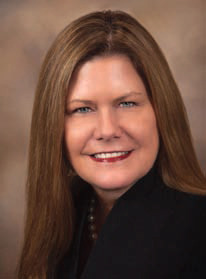 In a 2014 column in the pages of this magazine, Maureen Sweeny shared a story from her early career with IBM. After being passed over for an executive role, Sweeny took a meeting with her division manager. She opened it by saying, “I have a headache.” When the man offered her an aspirin, she said her headache came from hitting her head on the glass ceiling.

The anecdote says a lot about Sweeny: her drive, her dauntlessness and her appetite for challenge.

During a distinguished 30-year career with the U.S. tech giant, Sweeny shattered the glass ceiling, and went on to serve businesses as diverse as telecommunications, financial services, manufacturing, utilities, media and entertainment, and industrial sectors, both in the U.S. and abroad.

She brings the same agility to her present role as chief commercial officer for Australia-based Aristocrat Leisure Ltd., where Sweeny is in charge of Class III sales and global marketing. The native New Yorker, now based in Las Vegas, makes regular jaunts to her company’s base camp Down Under, and covers a global territory that is literally as big as the map, and includes Australia and New Zealand, Asia Pac, the Americas and EMEA.

Sweeny knew little about gaming in 2014, when she was recruited by Aristocrat. She was unfazed by the learning curve. “One of the fun things about working for a tech company that serves multiple industries is you get to adapt and apply whatever you’re offering to different business opportunities and problems. At the end of the day, Aristocrat is a technology company; we make outstanding software that creates great games, and outstanding hardware in the form factor of cabinets,” she says.

“The biggest task for me at the outset was learning what makes a great product, and what players like and don’t like,” along with the nuances of each jurisdiction and the evolving demands of contemporary players.

Working closely with Aristocrat CEO Jamie Odell, Sweeny has helped propel the company to new levels of growth, especially in North America, where the company has seen big success in the leased-game segment with titles like Games of Thrones, Sons of Anarchy and The Big Bang Theory.

Aristocrat’s greatest hit thus far may be The Walking Dead, a hands-down winner among fans of the TV blockbuster, and the No. 1 choice of many game critics in 2014, its debut year. In addition, to help its customers lure a younger generation of players, the company has developed double cabinets that offer a more vivid, immersive experience, and multi-player models, designed for greater social interaction.

From a game design point of view, Sweeny says, the company’s crack creative team continues to turn out products to appeal to a wide range of players, “from the core gambler who likes the very volatile math that’s the heritage in our Australian games, to players who like to chase a jackpot, to folks who like entertainment-style games and would rather spend more time with less volatility on a game. We are really creating games that are relevant for any kind of player, no matter their age, their demographic or the type of gaming experience they’re looking for.”

Asked about her goals for the coming year, Sweeny says, “Staying very close to our operators, understanding the challenges they face, and helping them achieve greater success. These aren’t new goals, but a continuation of the work we’ve always done.”