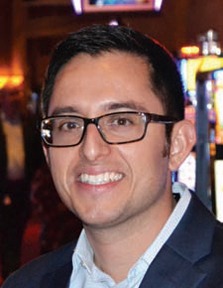 Armed with experience beyond his years, Alex Alvarado has brought a new perspective to the gaming industry. He is currently working for Penn National Gaming as the director of slot operations for Hollywood Casino Charles Town Races, a facility in West Virginia, outside Washington, D.C., but his journey started on the technological side of gaming.

As a child growing up in Las Vegas, Alvarado was always intrigued by the mystery of casinos, since they were “those places your parents always rushed you by.” With a mix of curiosity and skill, he decided to go to school for information technology at the University of Phoenix, where he graduated with his bachelor’s degree. His first position was with a technology company where he programmed gaming applications, followed by a position involving the sale and installation of ticket-redemption kiosks.

It was during this time that he first encountered MGM Mirage (now MGM Resorts International).

Alvarado knew instantly that MGM was an organization where a career could be launched, and spent three years as manager of slot operations.

“Although it was such a large organization, it felt like it was family-owned,” he recalls. “Once I got into gaming at MGM, I realized how mysterious it all was, and I wanted to learn everything I could about the industry.” He described coming in on his days off to shadow colleagues who worked in other departments, and what evolved to be a significant interest in analytics.

One of the suppliers to MGM—Aristocrat Technologies—had an opening for an application specialist, an opportunity Alvarado pursued to better learn how to “apply logic to numbers.” He worked in support and development, traveling to help general managers throughout the country leverage slot data. After gaining this valuable experience for two years, he returned to MGM as assistant manager of slot marketing, and was promoted to manager of that department within a year.

Alvarado’s diverse skill set caught the attention of the industry, and he was soon recruited to the Florida Gaming Corporation to help open a new property in the emerging South Florida market. After completing that initiative, he took advantage of his first international opportunity, a consulting position for a new facility in Kingston, Jamaica. After contributing to that assignment, he accepted his current position with Penn National.

Alvarado has been heavily influenced by two people in particular: Marcel Haar and John Georgiadis.

He met Haar when he was working as an IT consultant, and was instantly inspired. “The first thing he did was challenge me, and I challenged him right back.”

Haar has a wealth of experience, with which he taught Alvarado to never slow down once you put your mind to something. He describes Haar as an influential man who could “explain everything,” adding that “if he cared enough to talk to you, you should listen.”

Alvarado credits his ability to think about the “big picture” to Georgiadis. He met Georgiadis while employed at MGM, noticing immediately that he was  always “focused and had a plan.” Georgiadis has extensive experience in the gaming industry, specifically in Las Vegas, which appealed to Vegas native Alvarado. He showed Alvarado not only how to think of broad topics in detail, but also how to mentally connect the moving parts and see how they interact to form the big picture.

Alvarado is an industry trailblazer who has packed a lifetime worth of experience into just a few short years in gaming. The fact that he has accomplished so much in a variety of roles shows how far a little curiosity and a lot of hard work can go.