Although tucked away in a remote valley, customers find their way to the best gambling experience in Southern California 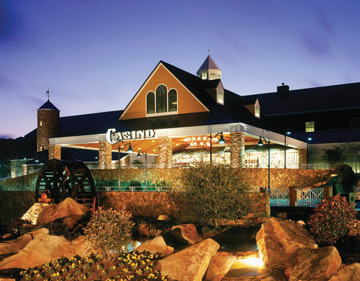 Visitors traveling to the Barona Resort & Casino in Southern California have to be truly dedicated to reach their destination. This hidden gem of a property, like all California casinos, is located on an Indian reservation. But the Barona Band of Mission Indians’ reservation is even more remote than its neighboring tribal casinos.

It’s about eight miles from the nearest highway, and the country road is winding in places. A single-lane road and some steep grades make the trip an adventure to say the least, but after a short drive through the beautiful rolling hills, you drop into the Barona Valley and feel a sense of wonder about the experience to come, as you are welcomed by a friendly waving security guard to the well-designed casino property.

Located outside of Lakeside, California, a suburb of San Diego, Barona is probably the least likely candidate to be the favorite of gamblers in Southern California, but it has been voted the Best Casino in Southern California year after year by gamblers, several publications and websites, and Barona has dominated the market for a long time. And because of the difficult navigation to get to the casino, no alcohol is served on the casino floor, only in some of the restaurants.

So what makes people travel the extra miles to this remote casino? One word, and it’s the focus of everything that happens at Barona—gambling.

Barona General Manager Rick Salinas says the philosophy at Barona is to make gambling exciting, to bring back the personal touch and service that characterized successful casinos for years, and to provide the players with an unforgettable experience that will follow them home and make them want to return.

“We are focused on the players,” he says. “Anything that takes that focus away is of no use to us.”

“Those things are used to reward gamblers,” says Salinas.

“We have attracted top tournaments like the Web.com Tour Championship, U.S. Open local qualifiers and numerous local tournaments on the golf course,” he says, “and the notoriety of the course makes it a great reward for our players who play golf.”

Ironically, Barona is one of the most progressive casinos when it comes to technology. Barona developed and launched the first voucher-in/voucher-out technology on the casino floor back in 2000, was the first casino to install server-based gaming technology and has developed impressive systems to recognize customers as soon as they start playing. But that’s where it ends for Barona employees.

“We don’t use analytics as much as you might think,” says Salinas. “We want our senior people, in fact, all 3,000 staff members, to be focused on the things that are important: friendly relationships with all of our players, providing unparalleled customer service, and fulfilling their goals. We learned to only focus on casino players and to do things our competitors cannot or will not copy.”

Barona also plays host to many of the latest slot machines in a specific section of the casino, points out Salinas.

“The slot manufacturers love to put their latest games in our casino because they can really see how they perform under pressure,” he says.

Players love it too, and are asked to provide feedback to a special email address.

The table games are fun and exciting too, with manageable minimums and favorable rules for the players, even though the results for games like craps and roulette are governed by cards, as required by California regulations. And at Barona, the Party Pit concept really works, where sometimes it is not so successful at other casinos.

You won’t find those kiosks that are becoming omnipresent in most casinos where players can cash in their tickets. Barona still employs a small army of nearly 140 slot cashiers making change and cashing vouchers with mobile scanners.

“We prefer that our players  interact with our employees,” says Salinas. “It’s more exciting for them to share their good fortune and experiences with actual people, not machines. Our management stays away from offices and meetings and spends their time with players and staff.”

In fact, Barona uses cutting-edge technology like the Kai mobile system from Acres 4.0 precisely to drive that personal interaction between employees and customers. Hosts are alerted on their smartphones of player birthdays, anniversaries, favorite drinks, food and other preferences. Players are greeted by casino employees early and often.

“Barona is showing us that you can take everyday technology and make (service) improvements,” says John Acres, CEO of Acres 4.0. “They have technology that helps them recognize when a player has a birthday or other personal event, and they will make a point of going over and greeting them not just once, but two or three times, by two or three different people.

Even the process of getting cash is friendly. You won’t pay the $4 service charge when you take money out of an ATM at Barona. The withdrawal is free and easy.

“We always felt that was rubbing salt in the wound,” says Salinas. “If you want to get money to play in our casino, we shouldn’t be charging you to do that.”

Winning is also important at Barona, and Salinas and his casino executives believe a lower hold percentage is important to retain players and maintain their loyalty.

“It’s all about time on device,” he says. “If we can give our players an entertaining experience where they can have fun at their favorite machines, we’ll be successful and maintain our leadership position in the San Diego market. So if that means giving them a better chance to win, that’s fine with us, because it makes our players happy and they keep coming back.”

Salinas, who was a human resources executive before becoming general manager, says he encourages his employees to create relationships with customers.

“It has to be genuine,” he says. “Customers can tell when you’re forcing a relationship on them. But when you can really connect with them and recognize them when they return, that’s important. It makes them feel wanted and special.”

Salinas says it has to start at the top, however, so he meets every employee hired by Barona before they begin their job and makes an effort to remember their names.

“I tell them one thing: just be a nice person,” he says. “If they do that, they can go far in this organization.”

Evidence of the personal service offered at Barona is replete across the casino floor. Jackpots are hand-paid. Nothing beats the image of a winning player receiving a pile of Benjamins in his or her hand. Or the sight of players having a meal at the slot machine. While this has been tried in other casinos, it hasn’t always been successful.

“We’ve got it down,” he says. “Not every casino can serve food on the floor. Unless you have a real system, it can be clunky. But we consider the casino floor to be another restaurant outlet, and we have a manager in charge of food service on the casino floor.”

So while the journey to Barona may be an adventure, it’s worth it because the excitement factor ramps up as the player arrives at the casino.