Does this emerging sport offer an opportunity for gaming-related companies? 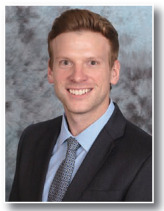 League of Legends, Defense of the Ancients, Halo, Call of Duty, and Hearthstone. Whether these titles are familiar to you or not, they represent some of the most popular competitive games in the burgeoning industry that is eSports.

While eSports may still be an ignorable industry to outsiders, in reality it represents a high-growth industry that is still in its relatively early stages of expansion. To have a clear understanding of the potential of the industry, it is important to have a cursory familiarity of the history of eSports.

The eSports industry of today lends its roots to the Nintendo World Championships, which were first held in 1990. The industry did not start gaining momentum, however, until the early 2000s as online multi-player games emerged.

Today, eSports fans travel to sold-out arenas to watch the world championships of their favorite games. If they can’t make the event in person, they are happy to stream the competition online. 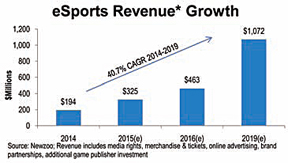 Statistics highlight that the industry is far from ignorable. Newzoo, an eSports market intelligence firm, estimates that the eSports industry generated total revenue of $325 million in 2015. This represents year-over-year growth of over 67 percent from 2014 revenue, which was $194 million.

Furthermore, Newzoo estimates that this figure will increase to over $1 billion in 2019.

Not only has the industry experienced strong revenue growth, the number of eSports viewers and enthusiasts continues to grow steadily.

With the strong growth eSports has (and is expected to) achieved, there have been numerous ancillary products and services launched over the years. From eSports arenas to streaming services dedicated to eSports and even fantasy sports leagues, the industry has been a popular outlet for innovation and expansion. The growth in the industry has also piqued the interest of a number of globally recognized brands.

Amazon placed a big bet on eSports when it acquired Twitch, a website allowing video gamers to broadcast their play online, for nearly $1 billion. ESPN’s website now has a section dedicated to eSports.

Colleges are also beginning to recognize eSports tournaments as legitimate intercollegiate competitions. This past March, college basketball’s March Madness was not the only college tournament occurring. This year marked the second annual “Heroes of the Dorm” eSports tournament hosted by Blizzard Entertainment.

There is no denying that the eSports industry is here to stay. However, the question remains on whether or not eSports represents an attractive opportunity for the gaming industry. Currently, there appear to be two primary channels for gaming entities to capitalize on the eSports market.

First, there is the opportunity for gaming properties and resorts to add eSports arena facilities or host eSports tournaments. As discussed previously, eSports fans travel to large arenas (such as the

Staples Center in Los Angeles) to watch the top

eSports events in person. For the top events, attendees are willing to pay over $70 to get the in-person experience.

Operators may see this as a proactive strategy to attract millennials to their resorts. From a direct revenue perspective, however, it is unlikely that eSports arenas will move the needle for most properties.

The second, and perhaps more interesting channel, for the gaming industry is eSports betting, where legal gaming operators can add eSportsbook or daily fantasy eSports products. Eilers Research estimates that the eSports betting market was approximately $2 billion in 2015.

The research firm projects that this figure will exceed $23 billion by 2020, which would generate approximately $1.8 billion in revenue for the betting operators. If gaming operators take too long to move, the potential revenue segment may pass them by. Traditional sports betting operators and new eSports-focused betting operators alike are already capitalizing on the market.

The Downtown Grand in Las Vegas has been one of the earliest adopters of an eSports facility. While it does not offer admission for spectators at this time, the property launched an eSports lounge earlier this year and has expansion plans.

Currently, the facility runs fixed-entry and fixed-prize tournaments where it returns 100 percent of the entry pool to contestants.

“The goal is to ultimately have a room that is similar to a poker room,” says Seth Schorr, Downtown Grand’s chairman. “We’re currently helping the (Nevada) Gaming Control Board in drafting legislation to allow eSports tournaments to operate similar to poker tournaments from an operator’s perspective.”

This would allow the property to take a percentage of the entry fees and generate direct revenue from the tournaments.

While it is still relatively early for the eSports industry, the industry and its growth prospects are too big to ignore.

It remains to be seen what the ultimate size of the eSports market will be; however, it is clear that there are opportunities for innovative companies (including gaming-related companies) to capitalize on the industry as it continues on its attractive growth trajectory. As for Downtown Grand’s positioning, Schorr is excited to be a driving force in bringing eSports to the gaming industry. “We are taking a holistic approach to the (eSports) community and are working towards positioning our facility around eSports,” Schorr says.

As the eSports industry continues to gain momentum within gaming and betting, the Innovation Group is committed to having our finger on the pulse of the developments. To that end, be on the lookout for our next Emerging Leaders of Gaming video webinar, which will focus on the eSports industry and feature a panel of industry experts.