The XiHu International Hotel with almost 600 rooms and the Blue Bay, with 1,400 condominium units, are just two of a dozen projects under way in Sihanoukville 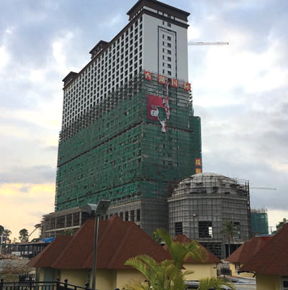 As the gaming industry’s collective attention is focused on what casino development might look like in Japan, a small seaside resort town on the coast of Cambodia is quietly emerging as the world’s fastest-growing gaming jurisdiction. The town is called Sihanoukville.

Sihanoukville is a port city and down-market vacation destination on the Gulf of Thailand in southwest Cambodia. It has long appealed to backpackers for its pristine beaches and low-priced accommodations. It also has served as a gambling and vacation destination for Thais and Chinese.

There are approximately 17 casinos currently in operation in Sihanoukville’s tourism corridor on or near Victory Beach, Independence Beach and Ocheteaul Beach, with a total of 27 casino licenses issued as of December 2017. In 2015, the market had nine licenses.

Since Cambodians are prohibited from gambling in the nation’s casinos, these properties rely solely on foreigners. The casinos that are open today are generally small and range in quality from half-star to three and a half stars. Some of the more recently issued licenses appear to be devoted to live-dealer online casinos.

Live-dealer online (LDO) gaming is a hybrid form of wagering that can be found in casinos in Cambodia as well as the Philippines. Within a casino is a separate table game pit that is reserved for patrons who wish to gamble from remote locations, ostensibly in other countries. These tables are equipped with special lighting and high-resolution cameras. A visitor to a casino’s LDO website can look at the faces of all the dealers in real time and select a table to play at. These online bettors can also observe casino customers walking in the background, further assuring them that they are playing a live game.

Despite the recent proliferation of LDO in the town’s existing casinos and purpose-built casino studios, Sihanoukville’s future is in brick-and-mortar properties, and this is where the growth is most dramatic. Rising along the beaches are no less than six high-rise mixed-use condominium/hotel/casino projects with at least another half dozen more in various stages of development.

The scale of these properties is dramatically different from current commercial structures, which are mainly low-rise buildings abutting rutted roads. These new projects are massive, high-density/high-rise developments, up to 47 stories tall. The projects are comprised of hotels, condominiums, retail and gaming. Some of the largest include the XiHu International Hotel with 508 lodging keys, the Blue Bay with 1,400 condominium units, the Royal Bay View with 1,344 condominium units and Sunshine Bay with 900 units. Within each of these projects will be a casino, although none involve major casino operators. The hotel and condominium projects that are rising today appear to be designed as investment vehicles for second-home owners, primarily from China.

Cambodia’s light gaming regulatory oversight has historically been a deterrent to international casino operators, who desire a strict regulatory regime. That may change soon. The Cambodian government has come to recognize that casino development targeting foreigners can play a very important role in the country’s economic growth. One need only look at NagaWorld in Phnom Penh and the impact that one integrated resort has had on the nation’s economy. In 2016, NagaWorld contributed 1.2 percent to the nation’s overall GDP and made up 22.7 percent of the country’s tourism sector GDP. It also employs 8,600 people, the vast majority of whom are Cambodian. Based on NagaWorld’s success, the central government has come to recognize that casino development can play a critical role in nation building.

In an effort to further develop the casino industry, the government is developing more robust regulatory oversight and tax policy. These new regulations are expected to emerge later this year. A gambling law drafted by the Cambodian Finance and Interior ministries has been submitted for approval by the prime minister’s cabinet. The proposed law would authorize the government to set up a body to review the internal financial controls of Cambodian casinos, promote the prevention of money laundering, and prevent other criminal activity. The law would also include a modest tax on gaming revenue that would further encourage growth of the industry.

Sihanoukville has numerous challenges that may preclude it from evolving into a regional gaming destination. It is not a particularly easy place to get to. Road infrastructure is in need of improvement. The town is serviced by a small airport, capable of accommodating A-320/737 aircraft on its single runway. The absence of a parallel taxiway requires that planes turn around after landing in order to approach the terminal. This limits the number of flights that can land at any given time of day. While the air terminal can accommodate international arrivals, its capacity is limited. The terminal is currently undergoing a modest expansion, which should alleviate current congestion.

It remains to be seen if there is sufficient demand for lodging and second home ownership for all of the supply that is currently under development, and what impact it will have on gaming revenue potential. Airlift into the local airport is limited to commuter flights from Phnom Penh and Siem Reap as well as a limited number of flights from other international cities. Regardless, Sihanoukville is a market that is worthy of the gaming industry’s attention.