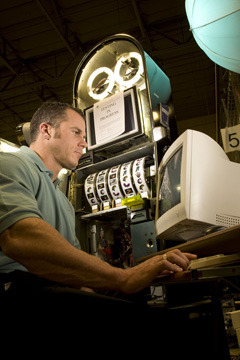 When it comes to testing new gaming equipment, regulatory bodies in the U.S. have two choices: they can contract for services to be provided by a private testing company like Gaming Laboratories International or BMM, or they can create their own testing facility.

States like Nevada and New Jersey rely on state-run labs. But when gaming was introduced in these jurisdictions, there was little other choice because there were no private labs at the time. These jurisdictions have honed and perfected their setup over the years and have developed efficient and properly functioning systems for testing new games and other gaming equipment. And even then, these states have had to turn to private labs at certain times.

In Nevada, the testing facility reports to Mark A. Lipparelli of the Gaming Control Board. Lipparelli says that in cases where it is necessary, the state has sought assistance from the private sector. It’s something he says can happen again if there is sufficient cause to go outside of the traditional state-run testing lab.

For example, when ticket-in/ticket-out was first introduced, there was a lot of work required to test the new technology. And because operators want quick access to new equipment and manufacturers want their product on the market as soon as possible, there was a huge demand placed on testing facilities. This increase in workload typically requires labs to ramp up their staffing levels. For private companies, this is simple. For the state-run labs, that’s not quite the case.

It can take as long as a year to bring in a new hire for the testing lab, he explains. And if something went awry in the hiring process, it could take even longer.

“If you have something like ticket-in/ticket-out hit, where you need to hire 10 or 15 people, well, forget about it,” he says. “That just doesn’t happen. With a private lab, if you need more people, you just go out and interview them and find the most qualified, do a background check and you can get someone hired in a month.

“When TITO technology hit the market, GLI was able to help the Nevada lab with the overflow work to get the devices on the floor quickly and ensure that all manufacturers were being treated fairly.”

Richard Williamson of BMM Compliance has similar experience on the public side of the equation, and sees similar problems that persist in public labs. Williamson spent 22 years directing the testing facility for New Jersey, and he recently worked with officials in Pennsylvania to establish that state’s test lab. Not only does he see public labs as being slow to react when quick changes in staff size are needed, but he adds that retention and replacement is just as difficult. Anything that delays approval of new products and slows the review process is ultimately bad for the industry, he says.

“When it takes as long as a year to replace someone, the operators are suffering,” says Williamson.

And it isn’t always just budget or procedures that can delay the process. Changes in administrations can lead to changes at regulatory agencies. Those changes can also delay the time it takes for a product to get approved and make its way onto the gaming floor.

“We’re running a business,” says John Roberts, executive director of tribal gaming for the San Pasqual Gaming Commission in California. “When we order machines we want them as soon as possible.

“Look at other states. It is evident that there is an inability for them to perform as the market needs. In Nevada and New Jersey it might work, but it doesn’t seem that it does in other places.”

That isn’t to say that there are no good reasons for public labs, just that there seem to be only a few. These facilities only have to focus on a specific set of regulations, rather than, say, the different regulations for the 400-plus jurisdictions that GLI works with. And it gives them complete control over their testing procedures, policies and personnel.

“The good thing about a state-run lab is that you’ve got a dedicated staff dealing with just your product and your jurisdiction’s rules,” Williamson says. “When you’re testing a product at an independent test lab, you’re testing for a lot of jurisdictional rules—the variations between the states and the tribal regulators. Because the state is testing just for one set of rules, it should expedite things.”

While states like Nevada and New Jersey have developed procedures and methods that work best for them, when it comes to new gaming jurisdictions, there was essentially a unanimous conclusion that private labs are the way to go.

“The current system works fine,” Roberts says of California, a state that has talked about the possibility of creating its own public testing lab. “GLI and BMM both do an excellent job.

“Given the state of the economy, I don’t see this as money well spent. You already have extremely capable companies in place with years of experience, and it just seems like an unnecessary duplication of efforts.”

There are additional variables at play in California (compacts negotiated with tribes call for testing to be conducted by an independent lab; the state is dealing with sovereign governments rather than corporations like in Nevada or New Jersey; the state is $45 billion in debt) but other jurisdictions face similar difficulties in creating their own labs.

GLI’s Mullally said he would have loved to create a public testing lab in Missouri. He just couldn’t figure out why he should.

“I looked at this from a variety of different perspectives,” he says. “I’m a bit of a control freak, and if I could have found a way, a sound public policy argument for creating a test lab, I would have pursued it. But I couldn’t justify the public expense.

“And it would have resulted in higher regulatory costs that I think would have reduced capital investments from casino operators and put more pressure on the existing tax base. It’s just simply not as cost-effective as a private lab.”

The consensus is that in general, equipment testing is best left in the hands of the private labs so state regulators can focus on auditing the information provided by the labs.

“Most jurisdictions choose to have highly trained technical staffs rather than make a significant investment in a full-blown lab,” Mullally says. “They choose to outsource the lab testing function because they find it’s a more efficient and prudent process that best leverages the government’s resources and its authority.”

BMM’s Williamson highlights two states for their approach to machine testing: Colorado and Mississippi. These states have maintained control over the process while contracting with a private lab for testing.

“In Colorado they do a review of the products recommended for approval by a test lab,” he says. “In essence, they audit what the test labs send to them. It’s one of the better models. They lower their expense and they’re not as subject to the budgetary issues that states are often faced with.”

Private labs also bring additional value to the equation in that they have departments to help jurisdictions establish regulatory policy and provide support when needed. In addition, there is a possible cost-savings component for operators and manufacturers, too.

“Think how much a slot machine would cost if every jurisdiction chose to invest in a full-service test lab and pass those costs on to the manufacturers,” GLI’s Mullally says. “The efficiency of going to one lab and having testing for a variety of jurisdictional standards done at one time for one price has been a tremendous benefit to the industry.

“And if you look at the rapid rise in gaming tax rates, it’s only increased the importance of keeping the cost of regulation as efficient as possible.”