As sure as bettors chase jackpots, so linked progressives will continue to prosper. 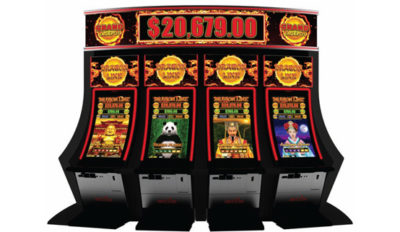 As the jackpot lure blazes through stages of stand-alone, in-house and wide-area multistate casino gaming, it reflects the three words found deep in the heart of many gamblers: more, more, more.

The dream of a life-changing score fuels an entire industry sector. And while the gambler’s vision of a monster win hasn’t changed, the process feeding it has. Vendors, suppliers and operators have enlivened the chase, bringing excitement to several tiers of the jackpot quest.

That’s the long-term secret sauce for this market segment.

While players balance how much of their bankroll to assign to the big jackpot quest—the increased number of machines reduces the odds of hitting— gaming’s big suppliers provide the vehicles for the attempt. Their products are increasingly imaginative.

Jon Hanlin, vice president of commercial strategy, gaming operations for Aristocrat Technologies, has helped orchestrate the company’s march through some linked progressive eras. The last four years have been dynamic, from the debut of Lightning Link in 2015 to Dragon Link in 2016 to the forthcoming release of Dollar Storm.

“We can drive a very interesting player experience at Aristocrat,” Hanlin says. “We have some jackpots that can be life-changing and some that can award $50,000, so you can pay off your car or student debt. We also have multi-site progressives (like in Nevada and New Jersey) which can go well over $1 million.”

The signage package will be introduced with the next generation of industry-transforming LED animating signage and sound with the storm intensifying the higher the MSP climbs.

Dollar Storm follows the success of Dragon Link, which Hanlin considers “Lightning Link on steroids.” This is a slot bank of four games, with a grand jackpot banner listed atop the machine. It incorporates the best of the in-house and stand-alone progressive dynamic. Dragon Link also contains the hold-and-spin bonus, perhaps the magic ingredient championed by Lightning Link.

When a player hits six or more of the 15 symbols on the machine, three free spins are triggered. Any additional symbols trigger three more free spins. Players can win the grand jackpot if they fill up all 15 spaces or collect the additional amounts determined by the bonus spins.

“Lightning Link was the best game released in a decade,” Hanlin says. “I call it a jackpot delivery system—it’s a way, through entertainment and gambling, of enabling players to feel that the more they bet, the better their chances are for big return. It’s been fantastic and well-received. You show the player where the chase is, where you’re going up to, and that you have the math and the chops to deliver.”

The game caught on like wildfire, to the extent of spawning Lightning Link Lounges, banks of anywhere from 20 to 100 machines.

“This game has revolutionized the industry so much, that’s why we keep coming out with new titles,” Hanlin says. “With the lounges, you also have the chance to localize this in one space. As you walk up to the bank of four, every minute somebody is in that hold-and-spin bonus situation. It drives that excitement and winning environment. It gives our casinos a chance to liven up areas of the floor. ”

The market niche is spiraling upward.

“Linked progressives will be a growing sector, commanding more casino space in North America,” says Steve Walther, Konami’s senior director of marketing and product management. “It’s become more and more appealing and almost a baseline for what needs to be offered in high-performing products. We’re focusing our resources to take advantage of a changing trend.

“We’ve been reaching a critical mass lately, with more of the popular games and progressives becoming mainstream products,” he adds. “The game mix is growing. We’ve seen stand-alone progressives, mystery, must-hit, even symbol progressives. There is an increasing number of ways to engage players.”

Roll out the propositions. Walther says player preferences change every few years based on economic conditions, and these times are comparatively prosperous.

“When we were looking at the financial crisis a few years ago, we were interested in helping people extend time on device with bonuses that looked achievable,” he says. “With the economy rebounding, people now want bigger jackpots.”

Walther notes an interesting contrast between on-site proprietary and multistate wide-area dynamics. While they both work well, on-site has the reinforced effect of someone seeing another player hit or returning after a couple hours to see the bonus amount has changed, indicating there’d been a winner.

Konami offers a number of products in this sector.

Treasure Ball is a one-of-a-kind linked progressive game available on the Concerto Opus cabinet. Inspired by the surprising fun of retro coin-operated toy capsule machines, it’s recognizable by its large globe of round mystery prize balls, which players can redeem and reveal during the bonus.

When placed in a bank configuration, Treasure Ball has a surprising attract feature in which the dragon flies across all connected machines in gigantic fashion, with a striking roar. This linked progressive game combines with almost any KP3+ base game, including Lion Carnival, Dragon’s Law Twin Fever, and Chili Chili Fire.

Reels Up is among the linked progressive launch series on Konami’s KX 43 machine. Games in the series feature Reels Up arrow symbols across all reels. Whenever the arrow symbols appear across reels 1 and 2, it causes reel 3 to expand upward for the chance at various bonus events, depending on the base game. Reel 4 and reel 5 also expand up if arrow symbols appear on additional consecutive reels. Konami’s Reels Up series spans four original base game options: Vegas Rise, Mayan Times, Expanding Egypt, and Hong Kong Lights. 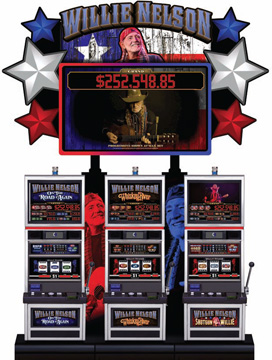 Everi continues emphasizing progressives in the gaming side of its multi-faceted operations.

Two premium offerings are its Super Jackpot Series, a popular linked progressive made up of its nine-line mechanical games library, and its Willie Nelson licensed titles.

In late 2018, the company introduced Lightning Zap Jackpots made up of three distinct games, five linked progressive tiers, and three volatility options to attract a variety of players.

“For the player, frequently hitting jackpots of various sizes are attractive,” says Jesse DeBruin, the company’s senior vice president of gaming operations. “Multiple games that feed up to ever-increasing meters make it more believable and realistically attainable for the player—as if they’re working towards recognizable jackpot pattern hit levels.

“For the supplier, linked progressive products enable them to package together a family of similar games, which tends to make them more attractive and stand out among the rest of the floor, simplifying the decision-making process for the player of where to place their bets.”

Everi plans to feature a number of new for-sale linked banked themes on its Empire MPX (“E43”) cabinet including the MoneyBall Series, Fu Stacks and Lazer Lock, a unique offering utilizing multiple progressive pools and a player-selectable multi-denomination option. Legendary country singer-songwriter Nelson is behind the newest installment of the E43 game series for the premium segment of tribal casino floors.

“We continue to pay close attention to the linked-progressive space through industry and customer reports,” DeBruin says. “Based on Eilers reports over the past year, it’s clear there’s been significant growth in linked progressive products, as top-performing games tend to be associated with families of linked progressive offerings. We’re seeing no signs of this trend slowing and believe the potential for future growth remains strong.”

IGT: A Line for the Link

Michael Brennan, vice president of product management for IGT, likes how this market sector is performing.

“Some of our customers report players lining up to experience IGT’s Wheel of Fortune Cash Link,” he says. “The title is elevating player excitement on casino floors across the U.S. with its compelling new Cash Link feature. We have introduced four Cash Link base games themes—our customers know the game is supported with a content roadmap that can extend the longevity of the game on casino floors.

“In addition, our latest Asian-themed stepper game, Dragon of Fortune, features a progressive pick that elevates player excitement by enabling players to win more than one progressive with a single pick.”

Wheel of Fortune offers the original wheel that players seek for a trusted slot experience. The proven Cash Link component builds anticipation on every spin as players watch gold coins collect on the reels before landing the triggering symbol on reel 5.

The Second Chance feature keeps the action alive by offering players another shot at a wheel spin or credit wins if a Cash Link symbol doesn’t appear the first time.

The wheel bonus features multiple pointers that can award credits, free games and up to three progressive jackpots. Players can win up to 200 free games, generating excitement and creating multiple chances for the Cash Link award.

Jurassic Park Trilogy Jackpot Bonus is played on a DNA game. Players are shown an active game board with each bet change, encouraging higher bets for better jackpot odds. Jurassic Park video slots feature the Wild Stack Multiplier Feature that awards up to a 5X multiplier when a full wild stack lands on one or more reels.

Scientific Games: Strong from Near or Far 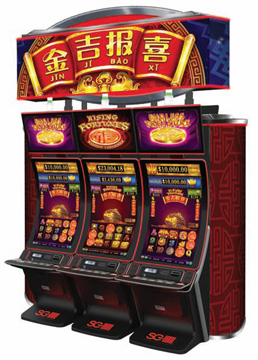 Scientific Games offers an impressive lineup both in the near-area and wide-area progressives realms.

On the near-area progressive front, Jin Ji Bao Xi is the company’s top linked game in Asia and is the follow-up to the hugely successful Duo Fu Duo Cai linked game series. The series is launching with two game themes, Rising Fortunes and Endless Treasure. The games include two levels of required near-area progressives that are won in the Jackpot pick bonus or randomly during the Free Games Bonus.

The internationally successful Du Fú Du Cái series began with the beloved original 88 Fortunes game. Since then, other games have been added to this series that showcase the player-favorite features of this original game, as well as exciting new features.

The Ultimate Fire Link series showcases fast-paced progressive games that give players an exciting slot experience. They’re built around an action-packed bonus mechanic, the Fire Link Feature, a lock-and-spin feature on an expanded reel set. During the feature, players can be awarded multiple progressive jackpots. There are currently six games in the series that offer multiple line and denomination configurations and feature four levels of linked progressive jackpots.

“Linked” is a good concept for progressive jackpots. Maybe forever. As long as human beings want to financially hit the ball out of the park, this segment is expected to thrive.