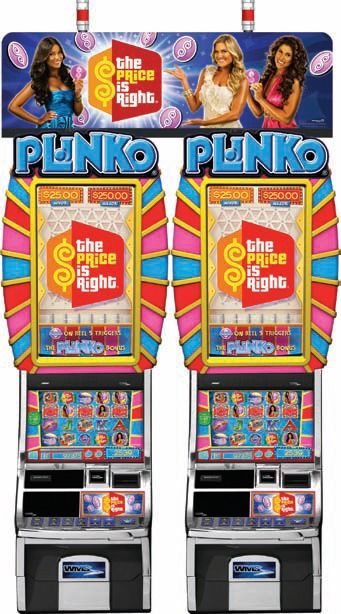 The Price Is Right: Plinko Jackpots concentrates on the most popular “mini-game” featured on what is the longest-running TV game show in history.

The large top-box display—a 32-inch vertical “portrait-style” monitor—replicates the “Plinko” game, which involves dropping a game chip to fall through a game board grid to land in one of several buckets at the bottom for a prize.

The base game is a 50-line video slot on a five-by-four screen (each reel has four active symbols instead of the standard three), with surprise features like “Wild Reels.” A minimum bet of 40 cents covers the paylines. During any base-game spin, a “Plinko chip” can drop into the top-box display to fall into a bucket at the bottom to change from one to four reels wild for a spin.

There is a free-spin bonus that awards 10 free games for three scattered bonus symbols, but the main feature of the game is the Plinko Bonus, triggered by a Plinko symbol on the fifth reel on either a base-game spin or free spin. Players are prompted to launch a Plinko chip into the top-box game board, where it passes through a “Money Zone” for bonus credits until dropping into one of seven buckets at the bottom of the top screen. The buckets award credits, multipliers, a free-spin bonus, one of two progressive jackpots—resetting at $25 (Minor) or $250 (Major)—or the “Showcase Showdown Wheel,” which spins the famous wheel from the game show for an award of up to a 100X multiplier.

It’s all wrapped up in a pack of sights and sounds from the popular game show, from the music and audience sounds to the announcer’s familiar “Come on down!”