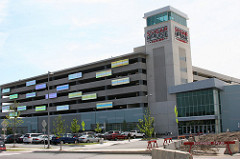 The battle of the Philadelphia casinos is like a rematch between Rocky Balboa and Apollo Creed.

In this corner: SugarHouse, the city’s sole existing casino, in the Fishtown neighborhood. Built on the Delaware River at the site of a former Domino Sugar factory, SugarHouse opened in 2010 with 1,600 slots and 40 table games. A recent $164 million upgrade added 44 more tables, 289 slot machines and a 28-table poker room, as well as new dining options, a concert venue and a new parking garage.

In the other corner: Stadium Casino LLC. Stadium is a partnership of Baltimore-based hospitality giant the Cordish Companies and Greenwood Gaming, owner of Parx, the highest-grossing casino in southeastern Pennsylvania. In 2014, the all-star Stadium team won Philly’s second (and last) gaming license. Its winning pitch included a casino with Cordish’s famous Live! brand in a sprawling $450 million entertainment complex to be developed near the city’s sports arenas. Under the proposal, it will have 2,000 slots, 150 table games and a boutique hotel.

In 2012, Pennsylvania became the second-largest gaming jurisdiction in the U.S. after Las Vegas, edging out former champ Atlantic City. Pound for pound, the market is still going strong; last year, the Keystone State’s 12 casinos raked in more than $3.1 billion in revenues, the highest-ever annual take.

Despite the apparent health of the industry, SugarHouse has mounted a legal challenge to keep the Live! project from moving forward, and in March, the State Supreme Court pulled the plug on the project, at least temporarily.

Ostensibly, this round is about the suitability of Greenwood’s primary investor, Watche “Bob” Manoukian; under the current arrangement, he would have an ownership stake exceeding the 33.3 percent state limit. But for SugarHouse, there’s a second, deeper concern: another contender in an already crowded ring, the southeastern Pennsylvania casino market.

“We’ve been very vocal about it—we don’t see a need in this market for another provider,” says SugarHouse General Manager Wendy Hamilton. “Nothing about the numbers says if you add another casino, you’re going to get another casino’s worth of revenue.

“Competition is good—it’s good for customers, and keeps operators on their toes. But we have plenty of it. There is a point of diminishing returns.” If the Live! project goes forward, she foresees “significant cannibalization of the existing operators.”

Hamilton points to her property’s expansion, which debuted in May, as evidence of “modest gaming growth in this market,” and a need for prudence.

“We more than doubled the size of the property in square footage, but we only increased gaming positions by about 20 percent,” she says. “That tells you we were focused on non-gaming amenities to help us grow gaming revenues. This is the most competitive gaming region in the country. Though we’re seeing some reasonable growth in table games, it’s like pulling teeth trying to make growth happen in slots.

“Nothing says we need another 2,000 slots and another 150 table games in this immediate region.”

Due to the pending legal challenge, the Cordish Companies declined to comment for this article; Greenwood Gaming did not respond to a request for comment.

The remaining competitors in Southeastern Pennsylvania are:

• Parx, a casino and thoroughbred racetrack in Bensalem, Bucks County, about 30 minutes from Philadelphia;

• Harrah’s Philadelphia, which includes a harness track, and is located on the Chester city waterfront, about 20 minutes from Philadelphia; and,

The legal challenge mounted by SugarHouse (and Market East Associates, which also bid for the city’s second gaming license) has stalled, but ultimately may not prevent the Live! development, which state lawmakers are counting on to help balance a strained budget. What then?

“The Philly market has been pretty strong,” says Cory Morowitz, chairman of New Jersey-based Morowitz Gaming Advisors. “But if you look at gaming throughout the Northeast, yes, it’s pretty saturated. There aren’t a lot of opportunities to grow on the land-based side unless it’s in a new jurisdiction or virgin territory.”

Live! could be more of a regional draw than SugarHouse due to its location, just off Interstate 95 near Philadelphia International Airport, says Morowitz.

“Over the years, it’s been shown that casinos in inner-city locations generally don’t generate the revenue that the population says they should—although they do well, they’re harder to get to and not as convenient. Based on its location and depending on the investment, (Live!) may draw from a wider catchment area than SugarHouse.”

The level of investment is key, he says, as well as creating one destination with multiple attractions.

“In a very competitive market, that clustering of assets will be helpful for them.” SugarHouse, on the other hand, can depend on the loyalty it’s built up over years of operation, as well as what Hamilton calls “a nice little renaissance in our micro-neighborhood in Fishtown and Northern Liberties. We have trendy restaurants and bars, a new Live Nation theater, a comedy club—it all kind of works together to make this ZIP code the place to be.”

Its local patrons, who according to Hamilton typically hail from within a 40-mile radius, are unlikely to defect en masse to another property, Morowitz suggests.

“Gaming revenues are driven by database players, who come often and play a lot over the course of a year,” he says. “They’re more dependent on proximity and the types of things these players like, which are free play and a good buffet. Investment matters more in a regional market, where people travel longer and spend more time on property. It won’t hurt (Live!) to have all that investment, which will allow them to cross-market with people who are there for other reasons.”

Harrah’s, for its part, may experience some impact from new competition, “but they’re part of a bigger entity, the biggest gaming company in the world,” observes Jeffrey Lolli, associate professor of the Center for Hospitality Management at Widener University, and a former director of hotel operations at Harrah’s.

“Caesars’ Total Rewards customers will go to Harrah’s whether they’re in New Orleans, Las Vegas, New Jersey or Pennsylvania,” Lolli says. “SugarHouse and Chester have their own dedicated market” to sustain them if and when the South Philly project goes forth. But over time, with exposure to other options, those loyalties could shift.

Another advantage for Live! is that its plan includes a hotel. “Sands Bethlehem always gets a larger set of gamers and keeps people there longer because it’s a whole entertainment complex,” says Lolli. “People who go to sporting events (in South Philadelphia) are already there, and can migrate to the casino after a football or baseball game.” They also have the option of staying a night or two.

One big drawback for the property could be traffic on I-95, which tends to snarl in rush hours, on game days, and during big concert events (South Philly is home to Citizens Bank Park, home of the Phillies, plus the Wells Fargo Center and Lincoln Financial Field, which collectively host not only professional league football and soccer and college sports but superstar entertainers like Taylor Swift, Beyonce, Adele and Coldplay).

“When you look across the entire United States, the slot market has been in the doldrums, and table games have been one of the few bright spots. It says something about the changing customer that’s out there in the gaming environment. It’s very different from 30 years ago, when table games were the bastard stepchild” of the gaming environment. For 2015, slots in Pennsylvania were up less than 2 percent year-over-year, according to figures released in January from the state Gaming Control Board.

The 14 percent tax rate on tables is also favorable for Pennsylvania operators, he adds. “It’s much lower than on slots (at 55 percent), unlike jurisdictions like Atlantic City, where the rate on slots and table games is the same. In those cases, the labor costs of table games kind of force operators to feature their slot product over tables.”

Back in 2007, two casinos licensed for Philadelphia were still on the drawing board (a license awarded to Foxwoods was ultimately rescinded). SugarHouse was in the pipeline, and the Philadelphia Convention and Visitors Bureau was test-marketing the slogan “Where High Stakes Meet Cheesesteaks.”

At the time, Meryl Levitz, president and CEO of the Greater Philadelphia Tourism Marketing Corp., wondered if casinos would “pull money from retail and pull diners from restaurants. The question was, ‘Are they going to add to the pie, or just cut off a slice of it?’

“Today,” she says, “I would say they’ve added to what makes Philadelphia and the countryside a well-rounded destination for all kinds of travelers—leisure, overnight, conventions. According to the research, casinos are among the top 10 visitors’ activities in day leisure, on par with the proportion of visitors who attend pro-am sporting events and go to zoos.

“They’re repeat visitors, and frequently a person won’t go to just one casino but will try their luck at several different opportunities, so each one has to be its own destination, create this nice zone where you get music, food, dancing, comedy clubs, gaming, free parking. It’s like connecting the dots, or the beads on a necklace.”

The Live! project certainly would have all that, if it ever comes to fruition. In the past, the Stadium partners have estimated it could take about 15 months, from groundbreaking to grand opening, for the complex to become operational. But for now, the project remains in limbo, and the competitors remain in their corners. For now, Morowitz sums up the current Philly gaming market with one word: “resilient.”

“The market’s been growing over the last couple of years, it’s grown this year, and I think it will continue to grow,” he says.

A deciding factor for any new property could be the state of the economy when it opens.

“Gaming is so economic-dependent,” says Lolli. “People will always travel, no matter what the economy is like, but no one really has to go to a casino. That’s disposable income. When people have to cut back, it’ll be, ‘I’m not going to gamble, I’m not going to see a show.’ If the economy holds up, I think (Live!) can do well, depending on the million-dollar question:

“Do we need another casino in Philadelphia?”