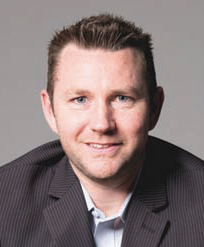 Reflecting back, Walt Fales knew he was destined for the “people business” from an early age, stating, “I was the kid always out at my lemonade stand. I sold candy on the school bus and solicited advertising buys for my high school athletic programs.” Fales became well-known as the “Lawn Ranger” after starting a landscaping business at age 13 which ultimately grew to more than 40 clients. He has always been a bit of a workaholic, and some things haven’t changed much over the years.

Now, as chief development officer at Warner Hospitality, Fales still cites work ethic, passion for excellence and drive for continuous improvement as the cornerstones of his rise in the gaming industry, having spanned 13 different titles ranging from roles in analysis to finance to casino marketing to development, throughout his still-young 15-year gaming industry career.

Fales has always enjoyed tackling new opportunities outside of his realm of expertise, enabling him to learn about new disciplines and make observations on where improvements can be made. This willingness to seek out new experiences has added tremendous value as he’s advanced into new leadership roles.

“I was never a fan of ‘the way things have always been done’ or the path of least resistance,” says Fales. It is his passion for continuous improvement—the desire to figure out the why, the how, and the “can this be better”—that has helped Fales provoke change and find new ways of looking at old challenges throughout the better part of his career.

Fales credits much of his success to his mentor, Mark Birtha, another “hotelie” from the School of Hotel Administration at Cornell University. Now president of the Hard Rock in Northfield Park, Birtha provided Fales with generous mentorship in his early years—often letting the starving college student volunteer for events that Birtha hosted to fulfill the roles of registration and debt collector in exchange for free food—which gave Fales the opportunity to meet all of the attendees firsthand and form long-lasting relationships.

“Mark provided invaluable advice about how to succeed in the gaming industry that I am incredibly grateful for to this day,” recalls Fales.

“Mark invited me to help develop the Venetian’s first formal internship program back in 2001. I had never been to Las Vegas before, but I saw a business model that was the epitome of the ‘people business,’ with 100 different departments and almost 6,000 team members. That was more people than the entire population of my hometown in Indiana! I said, ‘Where do I sign up?’” And Fales has never left the gaming industry.

In terms of today’s gaming industry, Fales believes there are big opportunities for young emerging leaders to succeed. “Those who are willing to give it their all, to go above and beyond, and to spend their early years learning and gaining experience in as many disciplines as possible, will rise above their peers quickly,” Fales says