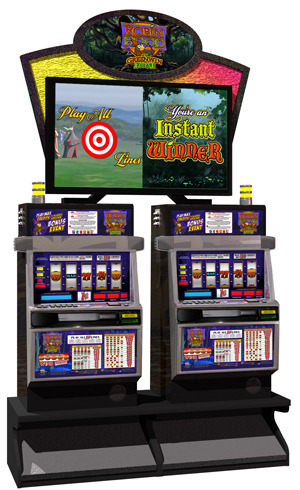 Anyone who has followed the slot sector knows that some of its most clever innovations and ideas—both player-friendly and operator-friendly—have come from a comparatively small supplier based in the unlikely locale of Pleasantville, New Jersey.

The company founded in 1978 as AC Coin & Slots has dropped the “Coin” from its name—the supplier is a long way from its roots in coin-operated vending machines, and slot machines themselves are a long way from their own coin-fed roots—but a lot more has changed for AC Slots.

Founded by former hotelier and longtime businessman Mac Seelig, AC Slots made its name in the national and international gaming industry for its uncanny ability to produce high-earning, player-favorite bonus games, which it marketed on top of IGT S-2000 reel-spinning base games. The company was IGT’s Eastern and Caribbean distributor for years, and has treated the leading slot manufacturer more lately as an OEM for its innovative bonus slots.

Neither the earning power of the games nor the creativity pouring from AC Slots has ever been in doubt. After redefining its relationship with IGT and shedding its role as a distributor, the company had everything it needed to expand in the global slot market, except one very basic element—a proprietary base platform for its games.

All that changes this year. Along with its new identity, AC Slots will use the Global Gaming Expo as a parade for a variety of new video slots, with a vital difference from the past: a proprietary slot platform known as “Axcess.”

“This is our entry into the slot machine market, on our own,” says Jason Seelig, AC Slots’ executive vice president of sales and marketing.

Axcess is launching with two main cabinet styles—each innovative in its own right. The main video workhorse has dual 22-inch LCD monitors, high-definition graphics, a new sound system and lots of flexibility. Speakers are mounted underneath, designed to offer sound to the player without disrupting nearby games, along with a booming bass sound that lets the player “feel” the game. The same box is used for new reel-spinners, with new games being launched in three-reel and five-reel stepper configurations.

The bigger news with Axcess, though, is its 32-inch vertical configuration. In video, the portrait-style monitor offers a world of new potential for creative video slot games.

The stepper version of the vertical cabinet offers another sub-plot to AC Slots’ offerings at this year’s G2E. It uses patent-pending oblong reel strips that fit nine stops—five symbols per reel for what is a 44-stop screen, freeing game designers to produce video-style games in a traditional mechanical-reel setup. A 22-inch LCD touch-screen monitor is positioned above the reels for bonus events.

It’s called the 5X5 Mechanical stepper, as in five rows of symbols on five reels. “The options you have with hit frequency on these games is a frequency never before available in the reel-spinning market,” says Seelig. “This will bring the hard-core reel-spinning player back to playing reels again.”

According to Jerry Seelig, AC Slots’ executive vice president, general manager and head of game development, the Axcess platform opens a new toolbox for game designers. “It is a state-of-the-art platform, very user-friendly and very efficient,” he says. “The amount of content we can drive to the platform is far beyond what anyone else can drive. We can now come out with new games by the month rather than the quarter. We can release anywhere between 40 and 70 new video slots a year, depending on the demand.”

“This is a very content-driven model,” adds Jason Seelig. “When you see the unique content we’re putting into it, it will surprise you. It will have content no one’s seen  before, and math models no one’s seen before.” Add to that the inherent capabilities of the latest computer technology. “We’ll be able to speak 27 languages,” he says. “We’ll be able to run up to a three-level progressive without adding software or hardware. It’s all built into the program.”

Other features include variable timing on the reels. “The customer can actually set these games on a 5.2-second reel-spin Sunday through Thursday to give people more time on device, and switch to a three-second spin for the weekend,” says Jason Seelig.

Among other special features of Axcess are player choice in the bonus rounds—players choose a free-spin or pick-style event when a bonus is triggered—“Double Roaming Wilds,” which are wild reels that appear two at a time in different positions on the screen during free spins, and a “Super High-Definition” LCD monitor Jerry Seelig says is “much more vivid than anything currently available in the field.”

According to Jason Seelig, Axcess is not a replacement for AC Coin’s legacy format based on S-2000, but an addition to it. In fact, legacy S-2000 games will be an important part of the AC Slots G2E collection, with new entries in every popular current category. But the main event will remain Axcess, with 60 new titles, mostly GLI-approved, in the main booth and another 108 in a private room offering a peek at the next games to go into development.

“We’re going to show more games on the new platform at the show than we’ve put out in a year previously,” says Jerry Seelig. “We’ve spent a lot of time with our customers, and this show is the culmination of 20 years of our customers telling us what they like and what they want to see.”

One element of AC Slots games built over those decades that will not change with the new format is the company’s knack for the simple, entertaining bonus event.

One good example is “Freak Show.” The format’s strengths are evident in the primary game, with intricate artwork re-creating images one would expect to find on a 19th century circus poster. Bearded ladies, strongmen, Siamese twins and other famous oddities are depicted in full-color animation that makes the base game compelling in anticipation of frequent bonus rounds—the player’s choice between a picking bonus that has you matching three “Freak Stars” for an award and a free-spin bonus with the Double Roaming Wild feature.

In typical AC Slots fashion, the  bonus features in all the new video slots are quick and easy to understand, while featuring characters that are clever and funny—the mad scientist in “Dr. Watts Up;” the cartoon bank robbers in “Bust the Bank;” the warrior swine in “Karate Pig.”

The latter game, available in both the standard video and 32-inch “5X5” stepper configurations, features a three-level second-screen bonus event in which the comical cartoon pig starts out cooking Japanese dishes. Success at that level moves to a second-level screen in which the pig practices moves for a karate contest—if making the right picks, moving on to that contest in the third, highest-paying level.

The 32-inch vertical cabinet allows specialized games of its own like “King Tut’s Fortune,” featuring a zodiac over the reels on the vertical screen; and  “Lucky Star,” which includes a game show-style wheel on top of the reels hosted by a smarmy game-show-host character not unlike the host of the legacy game “Big Game Show.” “Dream Chaser” uses the popular cascading-symbols free-spin bonus first seen in “Dream Weaver.”

The 5X5 stepper version also will be used to extend many of AC Slots’ most successful game franchises from past years. There is a new version of “Sparky’s Red Hot Jackpots,” which, in its original form, included the first-ever video bonus event created by AC Slots (it was actually a hybrid video/mechanical bonus). In the “Axcess Premium” series are “Redfire” and “Cirque Prime,” two new “Big Roller Series” games featuring the familiar scrolling top-box bonus initiated with the hit “Bankroll” series. There also is a new “Double Play” game—the series started with “Phat Cat” that features two machines in front of a single large LCD bonus screen—called “Queen Liona.” (She’s queen of the lions, for anyone keeping score.) New “three-pack” game setups will be displayed as well.

Jerry Seelig notes that groups of the new games will be available in multi-game setups within a single machine. “We can offer up to 40 games on a single box, and that box doesn’t have to be tied to a server to do that,” he says. “We’re delivering what the people want.”

AC Slots’ G2E showcase also will include games operators can use to refresh and augment the legacy games already on the floor—games that typically earn two or three times the house average.

Jason Seelig says the games will all be available for sale as well as in participation deals, priced “in a manner that’s advantageous to our customers.”

He adds that this year’s G2E showcase will serve as the coming-out party for the new, more complete manufacturer that AC Slots has become. “The goal right now is to offer a box that will stand the test of time and a platform that is bullet-proof and robust, and to start to drive content to it that players like,” he says. “If we can do those things, we are well-positioned for the future.”