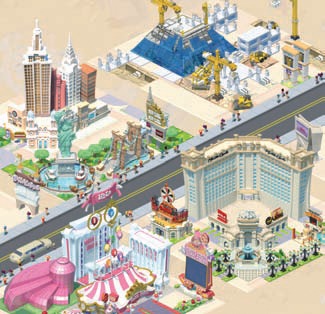 U.S. gaming companies are deferring bricks-and-mortar development in many cases in favor of cyber-casinos, according to a report in the Las Vegas Review-Journal.

At the Southern Gaming Summit in Biloxi, Mississippi in May, MGM Resorts International Chairman Jim Murren said the convergence of casino gaming and social media will be “the next big thing in our industry.”

In June, MGM launched myVegas, a free-to-play social gaming casino where virtual money is bet to win virtual prizes. Other casino giants also are investing in internet games—even though, for now, they generate no actual cash.

In 2011, Caesars Entertainment Corp. paid $90 million for a majority stake in social media/mobile gaming business Playtika; this year, the company bought the remainder for an undisclosed price. In its first-quarter earnings statement, Caesars said revenues associated with Playtika helped offset the company’s declines in Atlantic City.

In January, slot machine manufacturer International Game Technology spent $500 million to buy Double Down Interactive, whose DoubleDown Casino has 10 times the number of players of any virtual casino on Facebook.

Thus far, IGT has not released revenue totals related to Double Down, but Robert Melendres, the firm’s executive VP of emerging businesses, said, “Double Down is performing well and exceeding expectations. We believe there is tremendous value in this company.” He added that the company would eventually offer Double Down numbers on quarterly earnings statements.

MGM Resorts Senior Vice President of Business Development Tom Mikulich told the Review-Journal myVegas is a way reach the roughly 30 million members of MLife, the casino operator’s player loyalty program, whether they’re in Vegas or not. MLife customers playing online will be able to win non-gaming incentives such as show tickets and restaurant meals.

“Through myVegas, we can tighten our emotional connection between our brands and our customers,” Mikulich said. “That’s what we mean by convergence.”