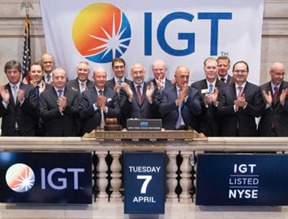 GTECH will be rebranded as IGT. The GTECH name will eventually disappear. As part of the sign changeover, the letters “IGT” will replace the blue “GTECH” letters at the top of the 13-story tower above GTECH’s current Rome and Providence, Rhode Island headquarters locations.

Marco Sala, a longtime GTECH executive, is CEO of the newly merged IGT. Former IGT Chairman Phil Satre is chairman of the board of the new company, with former IGT CEO Patti Hart as vice chairman.