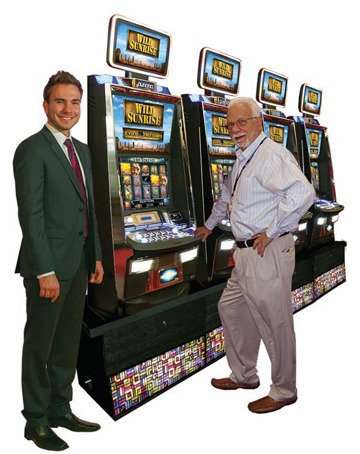 When Alex Gornakov completed an internship with Bulgarian slot manufacturer Casino Technology in 2009 and headed back to complete his education in the U.S. at Purdue, he knew that the technology developed by the manufacturer—the top supplier of slots in Eastern Europe—could be translated into big success in the United States.

Gornakov had already developed his own principle for creating successful slot games, a vision he based on Dutch historian Johan Huizinga’s 1938 book Homo Ludens. The title means “Man, the Player,” or “The Playing Man.”

“Today, the players crave a more sensible experience, and they are expecting value for their money in a shape and form acceptable to them,” says Gornakov, who founded slot supplier Alternative Gaming Solutions—also known as Alto Gaming—in 2011. “Our vision and product development are based on delivering the next step of the gaming experience and achieving the transformation and evolution of homo ludens.”

The 1938 book discusses the importance of the play element of culture and society, suggesting that play is a primary and necessary condition of any culture. In starting Alto Gaming, Gornakov, the company’s CEO, sought to apply that principle to the creation of slots that will appeal to the next generation of players.

However, Gornakov—all of 26—would need the help of a seasoned veteran to realize his vision. Enter Roy Student, as president of Alto.

Student, owner of consultancy Applied Management Strategies, is a 40-year gaming industry veteran whose credits include 13 years as an executive and chairman of Gaming Systems International, a pioneer in casino management systems; and six years as president of server-based gaming pioneer Cyberview Technology.

Like Gornakov, Student had a longtime association with slot-maker Casino Technology. When Gornakov presented the opportunity to head an effort applying Casino Technology IP and innovations to the U.S. market, Student jumped at the chance.

“I watched the gaming in Eastern Europe develop and grow, while I was involved with casino management systems and Cyberview,” Student says. “Casino Technology has always been at the forefront among the gaming companies there. With only 15 years of history, the company had succeeded to position itself on five continents and become one of the leading gaming brands in those markets.”

“Headquartered in Bulgaria, known as one of the strongest engineering and software development powers in Eastern Europe, Casino Technology had all we needed to give us the head start and bring the ideas to life,” says Gornakov. “I had no doubt that if Alto needed to partner on the technology side and gain speed on development, the company of choice would be Casino Technology.”

With everything in place, Gornakov and Student prepared to launch the start-up manufacturer with an aggressive push into two main markets—the U.S., and more specifically Native American casinos; and the booming Asian casino market.

The new company promptly signed a partnership arrangement to license intellectual property from Casino Technology for introduction into the new markets. The technology and titles licensed from Casino Technology are being customized for each new market, and according to Gornakov, Alto also is concentrating on tailoring that content to appeal to younger demographics across multiple channels—not only in land-based casinos, but in online and social channels through a variety of mobile devices.

The plan of action for Alto Gaming, says Student, has been to focus on Indian casinos in the U.S. as the first priority, while expanding its presence into other North American jurisdictions. At the same time, the effort will concentrate on penetrating Macau, the Philippines and other Asian markets with products customized for Asian players.

“Quality and diversity are mandatory characteristics required for a new product to succeed in a market, but they alone are not enough,” Student explains. “To appeal to local players, a game has to meet their preferences and needs, which could vary significantly in different operations and different regions based on demographics, operational strategy, market specifics, etc.

“Realizing this, the team of Alto Gaming planned from the outset to offer products adapted to the needs and demands of the North American customer. For this purpose, we attracted experienced U.S. experts with profound knowledge of the U.S. gaming industry whose expertise allowed us to find the perfect mix of products and concepts to be offered to local players.”

According to Student, for North America, the strategy is to concentrate first on launching Casino Technology’s branded series of slots based on the culture surrounding Penthouse magazine.

“Branded products are a great way to attract new customers and keep them engaged in the game,” Student says, “creating an additional gaming thrill attracting clients with the recognition of the brand, the glamorous presentation and appearance, and attractive gaming concepts.

“The Penthouse Slots series is a perfect match for resort casinos and high-end premium locations looking to provide extra excitement to their demanding customers in terms of choice and diversity.”

Meanwhile, other games and system products from Alto are designed to capitalize on an Asian gaming boom that shows no sign of slowing anytime soon. “Alto Gaming is determined to use the advantages provided by Casino Technology premium technologies and business expertise to make a breakthrough in the Asian markets,” Student says. “Our main targets are the fast-developing markets of Macau and the Philippines, due to their sustained growth and huge potential. In this respect, we are well-armed with products specifically designed for the local market.”

At May’s G2E Asia trade show, Alto debuted a new series of Asian-themed progressive slots licensed from Casino Technology called “Peacock and Dragon.” The series consists of games tailored to Asian gamblers that are linked to a multi-level progressive jackpot, available in both GLI-11 and GLI-13 versions.

One strength of Casino Technology’s product offering has been the interactive style of the slot-maker’s cabinets. High-end cabinet lines such as Sensa Flex and Sensa II Arch offer a sleek, ergonomic style with interactive features that allow players to multi-task while playing.

This year, the company released the Aurora cabinet for the U.S. market. “It is a very elegant and ergonomic slim upright cabinet, offering great gaming experience with two 24-inch HD monitors, a wide and comfortable button deck and superior appeal,” says Gornakov. “Other new cabinets that will be part of the premium and branded product offering will be released in 2015.”

One of Alto’s most impressive offerings takes that interactivity to the emerging online, mobile and social channels. Called the “Big 5” suite, the system package is aimed at “overcoming the gap between online and land-based—a gap that’s proving increasingly more and more challenging to mitigate,” says Student.

“The unique concept of the Big 5 did not appeared by chance, but as a result of careful research and thorough knowledge of the trends and developments in global gaming,” says Student. “Since the emergence of the first online casinos in the mid ’90s, online and social gaming has been exponentially expanding, gaining enormous momentum with no signs of slowing down.

“Companies from the traditional sector also recognize the potential of novel technologies to attract new groups of players. But despite the ongoing attempts for convergence between traditional and online gaming, these two sectors remain separated due to various regulatory hurdles or lack of needed technology.

“In this sense the Big 5 solution appears to be the missing technological link to bridge both worlds.”

The multi-channel approach is made possible by Casino Technology’s Server Games Technology, or SGT, which offers “a seamless gaming experience providing the same game content for online, server-based and VLT gaming and allowing players to enjoy their favorite games across multiple platforms,” says Rossi McKee, vice president of Casino Technology.

The SGT package is already successful in European online markets, through the company’s Elephant Remote Game Server. “Leading world providers of online gaming technology and services already are using the Elephant Remote Game Server,” says McKee. “As a result, Casino Technology’s top-performing titles are already accessible for millions of players all over the world through Playtech, NYX and other global online providers’ platforms.

“As part of its efforts to capitalize the ever-growing potential of emerging online and social gaming markets, Casino Technology and Alto Gaming will offer to the North American operators this revolutionary solution—a set of systems designed to overcome the gap between the online and land-based industries.”

She says the Big 5 suite will officially be presented to the North American market at this fall’s Global Gaming Expo.

Of course, even without the big splash expected at G2E, Alto is already making waves in Native American gaming circles. “Alto Gaming has a great potential to change the current modality in gaming and deliver a completely different experience,” says consultant Charlie Lombardo, the former head of gaming at Seminole casinos and slot operations VP at Caesars Palace and elsewhere, who has consulted for Alto.

“It is not merely a process of discovery, but a redefinition of gaming, and this young team certainly has the spirit, enthusiasm and ingenuity to do it.”