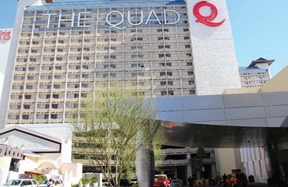 A shakeup is planned for the Las Vegas skyline as two resorts change brands, and in one case, ownership.

Time-share king David Siegel, CEO of Westgate Resorts, is the new owner of the LVH Las Vegas Hotel and Casino. He plans to turn part of the hotel into a time-share development.

And Caesars Entertainment announced last month that it will invest $223 million to overhaul the Quad, formerly the Imperial Palace, an aging 2,256-room casino-hotel on the Las Vegas Strip. As of October 30, it will be known as the Linq Hotel & Casino.

LVH was first built in 1969 by Kirk Kerkorian. At the time the property, known as the International, was the largest hotel in the world with 3,261 rooms. It has a rich entertainment history—Barbra Streisand was the headliner when the hotel opened and Elvis Presley performed 58 sold-out shows there, breaking all concert records for the time.

Hilton Hotels bought the property in 1970 and renamed it the Las Vegas Hilton, but cut ties with the hotel in 2012. The property was renamed Las Vegas Hotel and Casino, or LVH, and was owned by Goldman Sachs—which acquired it in a foreclosure on a $252 million loan—and Gramercy Capital.

About 200 of the nearly 3,000 rooms and suites will be converted to time shares, while others will remain open to regular hotel guests. The property’s 74,000-square-foot casino includes Las Vegas’ largest race and sports book, known as the SuperBook. According to a report in the Las Vegas Review-Journal, it will be renovated with new TVs and seating.

The property is managed by Las Vegas-based Navegante Group.

No terms of the deal were disclosed, but it is believed that the purchase price is $150 million to $170 million, reported the Las Vegas Sun.

The rebranding of the Quad, which had been rebranded from the IP just two years ago, reflects Caesars’ confidence in its new Linq development, an indoor-outdoor retail, dining and entertainment corridor in the middle of the Strip. The Linq is anchored by a 550-foot-tall observation wheel, the High Roller, which opened in the spring.

Caesars says it will renovate the hotel with new stores, spa amenities and a pool deck.