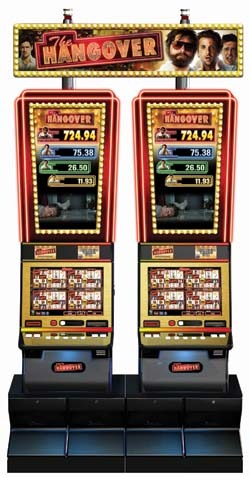 This progressive video slot is IGT’s take on The Hangover, one of the most popular comedy films of the past few years. “The Hangover” features 125 video clips from the film, woven into an interactive video sequence narrated by “Mr. Chow,” voice-over provided by Ken Jeong, who played the crazy Asian gambler in the movie.

The base game is in the “MultiPLAY” format, with four sets of reels spinning for each game. Reel symbols include each of the main characters of the film (Allen, Stu, Phil and Doug), which involves a Las Vegas bachelor party that ends with one character—the groom—missing and the other three searching for him. During the primary game, Mr. Chow’s voice crops up to “taunt” the player, searching for his missing $80,000.

The bonus rounds all play on situations from the film. Three shots of Jagermeister on the reels trigger the “Photo Bonus,” the gateway to one of four levels of progressive jackpot, each carrying the name of one of the main characters. The “Best Little Chapel” bonus re-creates the wedding from the film—Stu and an exotic dancer—by having the player pick mugs, hats and other memorabilia from the wedding to reveal bonus amounts.

The Mr. Chow Free Games bonus can lead to an extension called “Deal in the Desert,” in which the player picks to find the “Real Doug.” There is also a “Stun Gun Bonus” that recalls one of the funniest scenes in the movie, when the main characters are forced to serve as guinea pigs to demonstrate a stun gun for schoolchildren. When prompted, the player “tazes” Allen to earn additional rewards. And the Villa Bonus has you picking from a tiger, a chicken, an inflatable doll and “Baby Carlos.”

On top of all the entertainment is a shot at a wide-area progressive jackpot, which resets at $1.5 million in Nevada and at $500,000 in the Native American casino jurisdictions.