By featuring esports tournaments and esport lounges, casinos can attract a new market and create a new revenue stream. 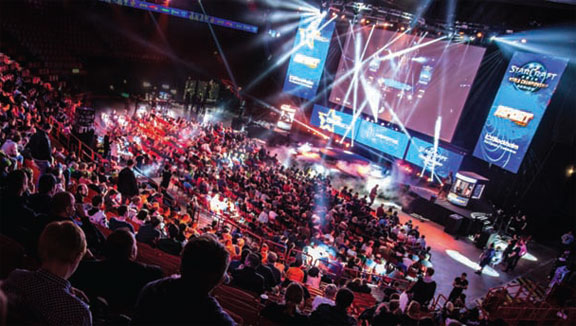 It is no secret at this point that video gaming—and its more recent ideation esports—has become a force to be reckoned with among the millennial generation, and has emerged as a $1 billion industry. As the bread-and-butter older generation slot player ages out, more and more casinos are looking for ways to use video gaming and esports at their properties to attract new customers.

Esports is a complex system with many elements and levels. There are therefore many and varied pathways through which esports can be incorporated into the casino environment. Each method comes with its own challenges, costs and success rates.

Constructing an esports lounge is one of the first solutions we have seen attempted. In the past few years, the eSport Arena and Millenial Esports were opened in Las Vegas. H1Z1 Pro League opened at the Twin Galaxies Esports Center inside Caesars Entertainment Studio, and versions of lounges have been opened in other locations.

The construction of such a lounge is a positive move in that it signals a property’s openness to and accommodation of the esports and video gaming communities. The fixed esports lounge also provides the infrastructure for the production of tournament events that can more easily be held when the proper equipment and space has already been configured to facilitate video gaming.

Constructing a dedicated video gaming lounge, however, requires a fair amount of capital investment by the casino property, which it must recoup by attracting a recurrent customer. People who are passionate about video gaming and esports exist in communities with their own cultural norms that are not always compatible with executive “suit” culture.

To capture a customer base from this demographic, casino properties must show that they see these customers as more than just dollar signs. There needs to be trust building between the new customer and the casino property.

Building an esports lounge is one way to show reception to their needs. Sponsoring esports teams would be another.

Putting a casino’s name and money in the game through sponsorship would be an excellent way to hold a hand out to the new market and show a willingness to listen to what they are looking for.

Given that video gaming can be done from home, a brick-and-mortar esports arena must overcome both this initial resistance to the casino venue and the virtual, non-social nature of the activity to enough loyal, recurrent customers to provide a good, concrete return on the investment. Ultimately, this can be achieved, but it may prove to be a longer-term build than expected.

For those who are unable or unwilling to invest capital in something with a delayed return on investment like the esports lounge, hosting tournaments may provide a more attractive solution to incorporating esports into a property.

Producing events such as concerts, conventions or slot tournaments to attract customers is a tried and true method that casinos have long utilized. Hosting an esports tournament, therefore, would be a familiar and comfortable pathway.

There are many kinds of esports tournaments, but for the purposes of this article, they can be broken into two main categories—professional and amateur. Professional-level esports tournaments are invitationals to which world-class players must be flown, accommodated and provided with large cash pots. They can attract a large arena audience and are typically streamed on the internet to millions of people.

Amateur-level or local-level tournaments are another possibility. These tournaments can be produced far more frequently, with a smaller investment and with greater involvement of the local or weekend-trip distance customer. This level of tournament would be an excellent pathway towards attracting a loyal, repeat customer base who will come to view the property as a staple entertainment venue.

Whichever level of tournament is considered, it is imperative that the casino property use knowledgeable tournament organizers who understand the community, games and marketing for this type of event. Typical marketing for the current casino customer, such as mailers and billboards, will not be adequate to capture a population who rarely looks up from their computer screens and mobile devices.

Each game or game type has a separate community with its own customs, interests and qualities. Marketing a tournament requires knowledge of the unique aspects of the specific community surrounding the game.

It is possible to make a few broad-stroke generalizations about the differences between gamers and boomers regarding the different things each type of customer values. For instance, as mentioned above, gamers value authenticity. A property cannot simply declare itself “gamer-friendly.” Attracting gamers requires organic growth. Gaining authenticity will necessitate the employment of people already in the esports space, to facilitate harmony.

Each generation has different priorities in how they spend their money. For example, while most gamers will not drop $20 on a hamburger, they will spend $150 on a sweatshirt. While they will resist spending $10 to park, they will spend $75 for the chance to compete in a tournament.

A gamer will place a higher value on free high-speed internet than on a plethora of fancy restaurants. Providing things that most gamers would struggle to afford would go a long way toward attracting customers to a brick-and-mortar venue.

One example is the including of virtual reality games. Most gamers cannot afford a high-quality VR set up. That could easily be an attraction to bring in more gamers. Creating spaces like free Wi-Fi lounges with food and drink would also be a great plus to gamers. The environment is very important because it expresses the overall experience the gamer has. Virtual reality, augmented reality and other high-tech interactions give the gamer the reason to return for more fun and good times.

Being casinos, no pathway to incorporating esports would be complete without wagering. The legality and mechanics of wagering on esports is still being figured out, but there is no question that a formidable financial system will need to be included.