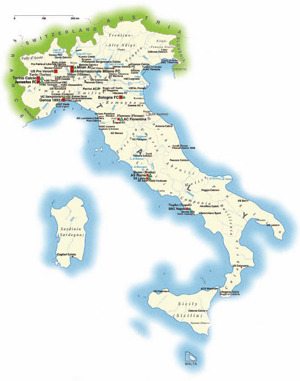 Gaming in Italy is booming. In 2011, revenue from all nationally regulated forms of gaming totaled €18.4 billion. The amount wagered by players reached a record €79.9 billion and returned €61.5 billion in prizes. The government collected €8.7 billion in taxes and fees. The figures do not include the results from Italy’s four casinos, which are regulated at the municipal level.

The numbers have grown steadily since 2006, which in a sense marks the start of the modern Italian gaming industry. In that year, when the nation’s AWP providers were finally connected to the central monitoring system, confirmed wagers were €35.2 billion, prizes returned €23.1 billion, revenue was €12.1 billion and taxes and fees were €6.7 billion.

Fully half of this healthy performance can be attributed to gaming machines in non-casino venues. In 2011, the AWP and VLT sectors combined to produce €9.2 billion in revenue on total wagers of €44.9 billion, and contributed €3.9 billion to the treasury.

The various elements of the regulated online and mobile gaming sectors, including skill games, accounted for €500 million in revenue and €140 million in taxes. The total amount wagered or staked digitally hit €8.5 million. This was without online slot games, which still have not been authorized by regulator AAMS, the acronym for state agency Amministrazione autonoma dei monopoli di Stato.

This year, Italy is tendering 1,000 licenses to operate brick-and-mortar poker clubs. Each license will be valid for nine years and cost €100,000. The taxman will rake 3 percent of gross turnover.

The continued expansion of the industry has not been without hiccups. In February 2012, the Italian accounts court, or Corte dei Conti, ordered all 10 of the nation’s AWP/VLT operators to pay fines totaling €2.9 billion as penalty for failing to connect their AWP networks to the central monitoring system on time. While steep, the fines are nowhere near the €98 billion originally ordered in an earlier decision in 2007.

Also in February, the E.U. Court of Justice delivered a judgment critical of recent Italian law reforms. The court ruled that a regulation which sets minimum distances between betting shops favors existing businesses and protects their market positions by pushing new license-holders to commercially less attractive locations. That amounts to discrimination under E.U. law. The court also called for transparency in regulatory processes when it comes to blocking an operator from becoming licensed or withdrawing a license.

The E.U. court judgment resulted from a 12-year case involving sports betting operator Stanleybet. In Italy, the U.K.-licensed Stanleybet has 200 so-called “data transmission centers”—essentially internet cafés where players place bets with the company’s operations outside of Italy. However, regardless of this recent ruling and the earlier Placanica ruling which also involved Stanleybet, it is expected that the modern Italian gaming laws are strong enough to prevail.

In Italy’s VLT market, the war on the ground is being won by three suppliers: Novomatic, Spielo International and Inspired Gaming. Here is the current state of action.

In 2011, Novomatic, through its wholly owned subsidiary Austrian Gaming Industries GmbH, took the leading position in the Italian VLT sector with a 44 percent market share. Recently, Novomatic placed into operation its 14,000th terminal of a total contracted 24,000 VLTs.

The Novo Line VLT was designed exclusively for the Italian market. Specifically developed to comply with the strict regulations of AAMS, the server-based VLT solution was among the first to be licensed and available to Italian operators. Based on existing contracts with almost all Italian concessionaries, Novomatic has established a major position in the market.

The Novo Line VLT system is a complete end-to-end video lottery solution, encompassing terminals, games, the gaming network and the centralized draw. Italian requirements call for an interface to the central monitoring system of the regulatory body, which allows for real-time transmission of all relevant data. All actions and procedures are handled via a public key infrastructure for top-level security. The Novo Line VLT system installations in Italy use the internationally popular Super-V+ Gaminator upright and NovoStar SL3 slant-top cabinets.

Adria Gaming International S.p.A., a 100 percent-owned subsidiary of Novomatic, manages the Austrian supplier’s expansion in Italy. Headquartered in Rimini, site of one of Italy’s major annual gaming and entertainment trade shows, Adria Gaming has succeeded in securing long-term supply contracts for VLTs with eight of the current 10 concessionaries.

On the operations side, Novomatic holds a majority share in one of the 10 concessionaires, having increased its stake in Rome-based G.Matica to nearly 81 percent in July 2011. Together with other subsidiaries, Novomatic currently operates 70 amusement arcades in Italy.

The large demand for VLTs in Italy has had a positive impact on production at the Novomatic headquarters and manufacturing facility at Gumpoldskirchen, Austria. The plant has found it necessary to run multi-shift operations to meet demand.

Novomatic’s position in Italy is of major importance to the group, especially since the Italian approach to VLTs will serve as a model for a new trend in Europe and around the globe. The strict regulation established by the Italian legal authorities is already being used as a model in several other countries for a planned extension of their gaming markets.

Spielo International was the first supplier to be licensed in the Italian VLT market and the first to go live. The firm’s end-to-end VLT solution for Italy includes games, cabinets, site controller and central system, which was developed from two decades of central system experience.

In 2011, Spielo International’s installation base in Italy grew from two concessionaires and approximately 6,000 terminals to four concessionaires and more than 10,000 terminals. At present, the supplier has deployed in excess of 10,600 VLTs in the market. When full implementation of the first license release program has been attained, Spielo International expects to provide a total of 14,850 VLTs, more than a quarter of the total Italian market.

Concessionaires currently using Spielo International’s products, software and games are Lottomatica Videolot Rete, Gamenet, SNAI and Codere. More partners are anticipated for the future, including new operators from the recent second round of licensing.

In the related AWP sector, Spielo has been expanding its footprint since entering the market in 2010.

According to Walter Bugno, president and CEO of Spielo International, a wholly owned subsidiary of the Lottomatica Group, the unique and advanced nature of Italy’s VLT network gaming structure has so far limited the number of central system suppliers able to partner with concessionaires.

“We believe the Italian VLT program is the most advanced to date,” says Bugno. “It includes newer and advanced levels of controls for a gaming program with central determination of win outcomes. We believe these to be considerable enhancements and improvements in the controls over a VLT program.

“Thanks to our 20 years’ experience deploying VLT solutions to regulated gaming markets around the world, and thanks also to the strength of our system, products and services, we were able to work within AAMS/SOGEI’s requirements to be the first to market.”

A large number of games from the supplier’s existing lineup have been adapted for the Italian VLT market. Ten have been certified so far and many more are expected to be rolled out over the course of 2012.

Spielo International also has entered into agreements with third-party content providers who will use a Spielo game development kit, or GDK, to provide games for the Italian VLT market. GDKs are packages of software tools that allow third-party suppliers to invest in building a game library on the GDK manufacturer’s platform, instead of diverting resources and devoting years of development to creating their own platform.

Bugno pointed to the advantages of such an approach, saying, “For those late to the Italian VLT market, the benefits of GDKs are immense. New suppliers can still enter the Italian market without the need to develop and license a specialized, multi-game platform tailored to the needs of a distributed VLT market.”

Inspired Gaming Group has taken knowledge gained from deploying its open server-based gaming system at home in the U.K. and elsewhere and applying it to its work in Italy. Its system for concessionaire Sisal was one of the first two systems to go live in Italy in summer 2010.

For Italy, Inspired has formed a joint venture with gaming machine supplier Merkur Gaming of Germany. In January 2012, Merkur Inspired announced it had passed the regulator’s VLT approval process for its second concessionaire, B Plus Giocolegale, which is the largest gaming machine operator in Italy and which has the highest share of VLT licenses.

Martin Lucas, managing director for the VLT and betting division at Inspired Gaming Group, said at the end of February that Inspired had installed over 5,000 VLTs in Italy so far.

“The process to get approved with each concession is very thorough and takes some time, but we’ve made enormous progress considering that after two years of government testing some suppliers are still not live at all,” says Lucas. “Sisal’s rollout of VLTs has been very successful, and nearly all of the machine volume allowed under Sisal’s VLT licenses is now live and generating strong incomes. We’ve just started off with B Plus and we are very pleased with the amount of VLTs that we’ve sited since gaining government approval a month ago. We should get to 1,000 shortly.”

Having to go through a second approval process for what is basically the same system is one of the peculiarities in the Italian regulation. In fact, even should each of the 10 concessionaires were to choose to use the same supplier’s system, the approval process would have to be repeated in each case.

“We can deploy our software onto anybody’s cabinets, provided they are technically suitable, and we have a proven track record of doing this, in Italy and elsewhere,” says Lucas.