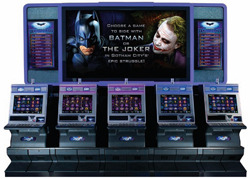 The newest game for IGT’s giant “Center Stage” theatrical community-style game setup, The Dark Knight uses the giant video screens—103-inch or 70-inch monitor, or a new 50-inch screen on a two-machine version—to re-create one of the action sequences of the 2008 Batman film of the same name starring Christian Bale and Heath Ledger.

The primary game is a 50-line video slot, with bonuses available with a bet to cover the lines. The player is prompted to assume the role of one of the two main characters, Batman (as portrayed by Bale) or the Joker (Ledger). Some of the icons and animation in the slot game change according to which character the player picks.

There are two pick-style bonuses triggered by reel combinations. “Agents of Chaos” and “Sonar” incorporate familiar scenes from the film with multiple winning outcomes. Another base-game bonus event, “Sleight of Hand,” has the player swipe his hand on the screen to turn over the Joker’s card.

There are also random events during play, but the central feature is the “Battle for Gotham,” a high-speed car chase played out on the big screen for all eligible players on the bank. Batman and the Joker race around Gotham City in their souped-up vehicles, and the players who picked the winner at the start of play win the higher bonuses. Players get the bird’s-eye view of the super-vehicle race, thanks to the surround-sound speakers and vibrating chair, which take them right into the chase-and-crash scene from the film.