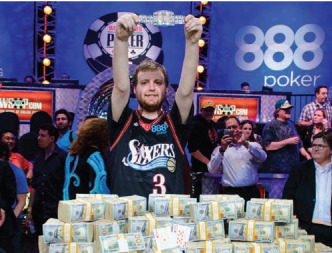 When the World Series of Poker got under way this year in Las Vegas, it marked the 47th edition of the famous tournament. Today, the WSOP is owned by the world’s largest casino company, Caesars Entertainment, and held at one of Caesars’ largest casinos, the Rio. It’s come a long way since Benny Binion launched the event at his Downtown casino, the Horseshoe, in 1970.

Actually, the very first tournament that was to become the WSOP was held a year earlier in Reno and hosted by Texans Tom Moore, who owned the Holiday casino, and Vic Vickery, a gambler and raconteur. Some of the gaming luminaries who attended that first event included Jimmy “The Greek” Snyder, Rudy “Minnesota Fats” Wanderone, Binion, Doyle Brunson, “Amarillo Slim” Preston, Johnny Moss and Puggy Pearson.

The next year, Binion decided to hold a similar event at the Horseshoe. The winner, Johnny Moss, didn’t even win one of the games—he was voted best player by the other contestants. Poker wasn’t an important game in or out of the casino, so few paid attention.

Binion knew he had a tiger by the tail, however. He instituted new rules, with seven players putting up a $5,000 entry fee in a freeze-out format. Moss actually won to retain his title.

In 1972, the legend began to grow as Amarillo Slim scored a come-from-behind victory and became the best ambassador poker ever had. A year later, WSOP came to TV for the first time, televised by CBS Sports, and expanded to include four more games—Seven-Card Stud, Razz, Deuce-to-Seven Draw, and a lower buy-in No Limit Hold ‘em event.

Later, Moss won his third championship and Brunson won back-to-back victories to solidify his reputation as one of the game’s best players. Moss remained the only three-time winner until Stu “The Kid” Unger won two titles in the 1980s before tragically dying after winning his last WSOP in 1997.

Throughout the ’70s and into the ’80s, Binion ruled the tournament, but as it grew, the Horseshoe, which didn’t even have a poker room when the WSOP started, began to get tight. Benny’s son Jack took more and more responsibility as his father grew older. Benny Binion died on Christmas Day in 1989. Jack Binion, along with his protégé tournament director Eric Drache, launched the first satellite events, spreading the WSOP popularity far and wide.

The 1990s saw the expansion of gaming nationwide, and Jack Binion’s Horseshoe Gaming was a major player, opening the most successful facilities in several regional markets. That success caught the attention of Harrah’s Entertainment (now Caesars Entertainment), which bought Horseshoe Gaming (and the WSOP) in 2004.

Truth be told, Caesars has elevated WSOP into a major sporting event each year. With a new format, conducting the WSOP for a few months beginning in May each year and reserving the No-Limit Texas Hold ‘em finals for November has become a hit. ESPN provides wall-to-wall coverage and the “November Nine” is must-see TV for poker enthusiasts.

There have been no back-to-back winners of the WSOP since Johnny Chan accomplished the feat in 1987-88. There have been no repeat winners in the last 20 years. The WSOP bracelet has become the status symbol for any poker player, but the main event winner immediately is entered into the record books.

From seven players in 1970 to the almost 6,800 this year (the fifth-highest of all time); from the few thousand dollars for the winners in that first year to the $8 million at stake in 2016, the WSOP is clearly the crown jewel of poker championships.

But no matter how well-established or renowned the WSOP becomes, it will always be indebted to the passion and creativity of the Binion family that helped create it.