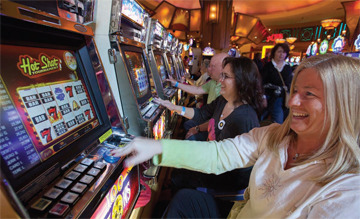 In 2014, GGB published an article by this author titled “Killing the Gaming Experience,” igniting a debate that rages today. The basis of that article was that the gaming industry has seen a substantial increase in slot hold percentage over the past decade due primarily to the growth of less volatile, multi-line video reel penny slot machines and the growth of free play as a marketing tool.

The net results were diminished gaming experiences for customers. The article spurred a significant amount of interest from within the industry, both from operators and manufacturers. Some industry veterans pointed out that it was not fair to just blame video reel games and free play; equally at fault is what has happened to the average bet on these games and the increased “cost to cover.”

Cost to cover is the minimum amount that must be wagered to ensure that all possible lines have at least one coin bet on them. This would mean that on a traditional, three-line quarter stepper slot machine, the cost to cover would be 75 cents. If one only bet two coins per pull, he would not be betting on all three lines and would be, in effect, playing a higher-hold slot machine. In addition, on that game, a player must bet the maximum on all three lines in order to have a chance to hit the top line jackpot. Since hitting the top line jackpot is factored into the hold percentage of a machine, not playing the max bet per line would increase the theoretical hold percentage even more.

These two factors have greater significance today. For example, say a player sits down at a 2-cent multi-line video reel slot machine, with 40 lines and a max bet of 10 credits per line. The cost to cover is 80 cents (2 cents times 40). The max bet, the one needed to have a chance at the top line jackpot, is $8 (2 cents times 40 times 10).

Traditionally in casinos, lower-denomination machines carried the higher hold percentages. Nickel games had a higher hold than quarters, which had a higher hold than dollars. As such, when penny games where first introduced, they were equipped with the highest hold on the floor. However, a penny game today is far from a penny game of past generations. When one looks at the average bet (closer to $1.75 per spin), one could argue that it would make more sense to price them closer to traditional $1 steppers.

How This Combination Has Impacted the Gaming Experience

Over the past two years, industry professionals have tried to better explain the lackluster performance of electronic gaming devices in established domestic gaming markets. The U.S. economy has fully recovered from the recession of 2009 and consumer spending is now returning to pre-recession levels. Nevertheless, most domestic gaming markets have yet to enjoy the fruits of an improved economy to the same levels that they achieved pre-recession. There is now widespread belief that an overall increase in slot hold percentages by casino operators could be having a deleterious effect on customers’ gaming experiences.

In evaluating the lack of growth in slot revenue since the onset of the recession, one must include the hold percent of a machine (based on gross), the cost to cover (therefore affecting average bet), max bet, and the amount of free play issued. The following example illustrates trends that we are seeing.

Let’s assume that Betty, a 55-year-old player, used to be a quarter player who wagered on a traditional, three-reel slot machine. She used to have an average bet of 75 cents on a 7 percent-hold machine, and her budget would last 3.5 hours, the sweet spot in time that gamers seem to enjoy for their overall gambling experience.

As the number of penny games on the floor began to increase, Betty was allured by the graphics and quality of the games, and started migrating to that more entertaining experience. As she played, she found that the higher her average bet, the more often she was able to get into the bonus rounds, and the games became even more fun.

Over time, her average bet increased to $1.75 per spin, and she was now playing a 12 percent-hold machine. If her budget remained the same as when she was a quarter player, it would theoretically be gone in less than an hour. In real life, part of the reason that Betty’s handle would have increased on the new penny games is that she would be receiving free play offers, which gives her more time on device. However, even if her gross loss per trip doubled (half from free play and half from her pocket), her money is still lasting half the amount of time it was before.

Not only is Betty losing her money more quickly, but she is also finding that when tax season comes around, she has won fewer jackpots than when she was a 25-cent player. It seemed like she was winning all the time on the penny slots (lights, whistles, bonus rounds), but the less-volatile penny machines did not hit the $1,200 jackpots as much as the games she played in the past.

Because of all of these factors, Betty’s gaming experience has been clearly diminished. So where does she go? What does she do? Perhaps one day the casino will lose her to online casinos where she can get the same games with a much lower hold percentage.

How Free Play Feeds Into the Equation

Any examination of slot hold trends must also include a discussion of the effects of free play. The two are intertwined. Free play has largely replaced the issuance of cash for promotions, rebates and mail offers in casinos throughout North America. With the ever-increasing number of high tax jurisdictions, free play is often the only marketing tool that casinos can utilize without costing them hard, taxable dollars.

Free play began to emerge as a marketing tool in the early 2000s. Prior to that time, casinos used cash as a primary means to reward customers for their loyalty or to stimulate a trip to the casino. From coupons for a roll of nickels to direct mail offers that rebated a portion of a customer’s prior loss, casinos dispensed cash to get customers to sit down in front of slot machines. The problem was that casino operators always felt that not all customers took the cash they so generously gave them and wagered the money in a slot machine. It was widely believed (and quite rightfully so) that some customers took their cash and walked out of the casino without ever having wagered a nickel.

By the late 1990s, casino operators had begun to ask slot system manufacturers for the ability to issue non-negotiable slot credits to replace cash premiums. Over the next decade, various technological and regulatory changes took place, and generally by 2012, virtually every casino had systems and slot machines that could issue free play. For a variety of reasons, free play became the primary marketing tool to foster loyalty and encourage repeat visitation. In many jurisdictions where free play is not taxed, this large marketing expense actually disappeared from the income statement. In other jurisdictions, where it showed up in a contra revenue account, many operators argued that free play was free, so why not give more?

The problem is that free play is not free. Since free play increases slot machine handle without increasing revenue, it theoretically decreases hold percent. In other words, as handle increases due to free play, slot floor hold decreases. To counteract this effect, the hold on slot machines must be increased in order to maintain slot hold par.

Slot revenue trends in Pennsylvania illustrate this point. Statewide, the machines held 9.7 percent; however, the casinos’ net hold (based on taxable revenue only, or gross slot revenue less free play) was actually only 7.9 percent.

While free play is a good benefit to the minority of players who receive all of that free play, it is bad for new customers who come to the casino without any free play offers, or existing customers who don’t generate enough theo to qualify for offers. At the end of the day, the majority of players who wager at slot machines at a casino do not receive free play. Only the minority who are avid, loyal players and use their slot club cards diligently get those offers.

The industry must find a way to keep all players engaged, provide value for their gaming dollars, and not rely on continuing to increase price (higher slot hold, higher costs to cover) to grow slot revenue. That is the true challenge for the industry.