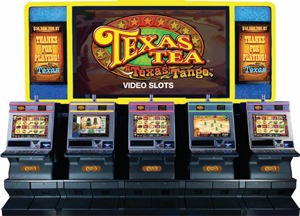 With this game, IGT combines one of its all-time favorite video game titles with one of its most popular new technologies, the movie-style “Center Stage” setup.

Texas Tea, featuring the cartoon “Texas Ted” rich oil baron and the bonus featuring gushers in a Texas oil field, was one of the most popular video slots of the multi-line video genre’s first surge in the late 1990s. The new game brings back the character and the familiar oil derricks in the community-style Center Stage series, with a bank of slots in front of a giant, 103-inch bonus video display.

The base game is a five-reel, 40-line video slot available in stand-alone or MegaJackpots wide-area progressive versions. In the primary game, mystery bonus events occur when helicopters, classic cars and TNT explosives appear on the screen to award wilds and bonus multipliers.

For the bonuses, players choose one of four characters to represent them in the events. The four immersive bonus games can be played as a group on the overhead screen. Two free-games bonuses—the “Fishing Pier Free Games” bonus and the “Heart of Texas Free Games” bonus—are joined by interactive picking games called “West Texas Oil” and “Houston, We Have a Bonus.”