Table game bonus bets... with a side of technology 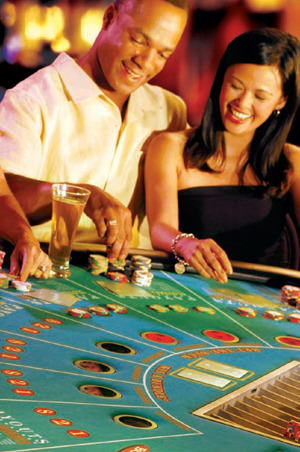 Innovation’s a funny thing,” says Roger Snow, executive vice president and chief game designer at Shuffle Master. “It happens in these little flurries of activity and the next thing you know the industry has really come a long way.”

Snow was speaking of recent developments in table game progressives, those side bets that entice players to commit an additional dollar or more per hand in the hopes of hitting the jackpot.

Says Snow, “For the longest time, nothing really happened in the space of progressives. It was all the same stuff year after year after year. And then, recently, things really started to percolate.”

For Shuffle Master, one of the latest developments is the installation of a wireless progressive for table games. At Cache Creek Casino Resort in Northern California, the company has linked up 12 of its games to the wireless bonusing system.

Until now, progressive systems have relied on wired connections, with wires running under the carpeting. One big advantage of a wireless system is flexibility, in that rearranging tables does not require a rerouting of wiring.

Shuffle Master also has a project under way to connect a number of pai gow poker tables at the Sunset Station and Red Rock casinos to a single jackpot.

“If you’re playing Fortune Pai Gow at Red Rock, or Fortune Pai Gow at Sunset Station, ordinarily they wouldn’t have the same jackpot,” says Snow. “But when they go live, they will have an identical jackpot. The theory is of course that the more tables on the link, the quicker the jackpot will increment and hit.”

The wireless aspect of the system currently applies to linking tables within a given property. Communication between casinos is still handled the traditional way.

As Snow implies, and as history has shown, innovative ideas tend to materialize in multiple places at the same time. So it is no surprise that wireless solutions are appearing elsewhere as well.

The wide-area progressive jackpot for table games has been around for some time in the U.K. In that market, it is common for a single operator to have 20 or 30 casinos scattered around the country. In 2002, U.K. legislation was changed to allow progressive bonus games for tables. Supplier TCSJohnHuxley, using third- party systems, wound up installing separate networks for three major casino groups. The result was that some 200 tables in all were connected to their individual group WAPs.

From experience gained over the years, the company has now developed its own system, known as Supernova.

“Conceptually, we’ve been working on what we can do to create a new system over the last three years,” says Simon Witty, who runs the Australian business for TCSJohnHuxley and serves as group product development director for Supernova. “We believe we have created a system that is much more advanced than all the others out there, really leveraging off the knowledge and experience of the last 15 years of working with systems.”

One major addition incorporated in Supernova is a mystery bonus. This is a separate jackpot pool from the main progressive and its purpose is to keep players interested in the game for longer than is usual.

“Games like Caribbean Stud Poker are what we call event-based bonus games,” says Witty. “By event- based, we mean there is a certain event in the base game, the poker game or the blackjack game—in Caribbean Stud that event is a royal flush, typically—and when that event occurs, if you’ve placed a side bet you win the jackpot.”

That’s all fine, says Witty, except for the fact that for the jackpot to build to a decent amount, it must of necessity hit very infrequently.

“What we’ve done is taken all of the event-based technology and added onto that mystery bonusing, which is where you introduce a random number generator. That allows us to do two things. We carry on building a large jackpot pool, which is event-based, but at the same time we also reward players randomly with frequent lower-level prizes.”

Witty calls it a “best of both worlds” solution, where the player still tries to win the big prize but is being rewarded frequently with random mystery prizes. The system allows the operator to set up various jackpot accounts and configure them to be awarded across different types of games. By combining tables running different games, a casino can build its jackpot pools more quickly.

Supernova also incorporates light and sound effects. When a mystery bonus hits, the bet sensors commence a random sequence of flashing lights and sounds, which terminates with the winning player being identified.

The objective is to have players seeing someone win a prize every time they sit down for a session.

“It may not be them, but they’ll see somebody at their table win,” says Witty. “They are going along to win that life-changing amount of money, at the same time they’ll experience someone win a mystery bonus approximately every playing session. We believe that will add to the appeal of the game.”

A Supernova system has been installed linking six tables in South America and several other casinos are about to commence Supernova trials.

It should be noted that some features of Supernova are not available in certain jurisdictions due to patent restrictions.

Galaxy Gaming’s newest table game bonus bet product is MEGAshare. This new side bet, a version of the “envy” bonus concept, allows anyone in the casino—or casinos—playing at a table linked to the system to share in the MEGAshare Envy Bonus Jackpot.

“This is an industry first,” says Greg Flowers, head of marketing and corporate communications at Galaxy Gaming. “Through the use of the proprietary technology of our Bonus Jackpot bet tabulating system, this allows casinos to link multiple table games together and where jurisdictional regulations allow, even ‘mixed’ table game types.”

The tables need to be linked together with Galaxy’s Bonus Jackpot system and equipped with tabulating sensors, which are controlled by proprietary software. This enables the build-up of a second jackpot, potentially to be shared by all players who were participating in the bet when the qualifying hand triggered the win.

The MEGAshare jackpot is not limited to a single game type but can be shared across a variety of tables. If tables in multiple properties are connected, then the bonus is equally shared among qualifying players at those other locations as well. Players qualify simply by placing the main Daily Bonus Jackpot wager, which has a separate jackpot pool and is game-specific.

Last April, Galaxy announced it had linked tables in nine Station Casinos properties via its Inter-Casino Jackpot System. Each property offers Galaxy’s “Deuces Wild” stud poker game and each table contributes to the common jackpot, which accrues at a much faster rate than would separate intra-casino jackpots.

Meanwhile, Back at G3…

The core of the DEQ bonus bet offering is the G3 system. Besides providing a home for DEQ’s Real Link wireless progressive, G3 enables side bets with multiple credits, bets on the dealer’s hand and mystery bonus bets. It can be applied to any card-based table game, using the appropriate, supplied pay table.

The system consists of five main components. For the player, the relevant devices are the bet manager and the table display. The bet manager is used to place a side wager on the player’s hand, the dealer’s hand or both, with the push of a button. It also keeps track of the player’s bonus wager history, for player loyalty calculation. When a player wins a bonus bet, the win is multiplied by the number of credits bet on his or her personal bet manager. A 19-inch LCD table display shows the prizes and other game information.

For the operator, a dealer console is provided to sell credits and pay out wins. The table controller is a computer that sits underneath the table and connects to the bet manager, the LCD display and the dealer console. At the center of the system is the server, the main computer on which the various prizes are configured and which provides reports for management. The server connects to the table controller wirelessly or with existing Ethernet cables.

It’s About The Games

All of the bonus bet systems have one goal in common: help keep the player involved in the current gaming session and eager to return for more in the future. The role of technology is to make the player experience more exciting and at the same time smoother. But all the technology in the world cannot make a player accept a bonus bet that, for whatever reason, is not attractive.

“There’s one thing that all companies that do progressives on table games are chasing,” says Snow, “and that is a blackjack progressive. That’s the Holy Grail, because there are just so many blackjack tables.”

Snow feels that there might be something in the nature of blackjack players that makes the bonus bet a less attractive prospect, but at the same time feels there is more to it than that.

“It’s a bit of alchemy, I’m afraid,” says Snow. “A lot of ideas are tried. Very few of them have a long life span. You just try different things and see what works.”