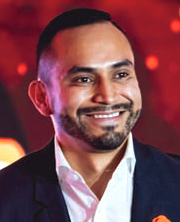 Like many other current and past Emerging Leaders of Gaming 40 Under 40 honorees, Eduardo Alvarez did not have his sights set on a career in gaming at the start of his professional career. With degrees in finance and economics,

Alvarez, the director of sales, Latin America for AGS, is an economist by academic standards.

When Alvarez embarked on his professional journey, he expected his career to follow his academic trajectory, progressing him through the banking or finance industries. However, just like many in the gaming industry, once Alvarez was introduced to a career in gaming, he was hooked.

His introduction to the industry came in the form of an interview for a data analyst position at Codere Mexico. “I was attracted by so many things during that interview,” explains Alvarez. “Codere’s atmosphere was like magic. The energy of the office, the fact that gaming was an emerging industry in Mexico (at the time), all those things made me want to join the gaming industry.”

Alvarez has continued to surprise himself throughout his career in gaming. From transitioning from an analytics role to marketing and eventually sales, to moving from an industry operator at Codere to an industry supplier at Cadillac Jack and eventually AGS through acquisition, Alvarez’s career trajectory has been anything but linear.

Alvarez recalls his first meeting with a casino manager as a business development representative at Cadillac Jack as one of his biggest challenges. “I remember thinking, can I handle this?” recounts Alvarez. “I pushed myself to do it, knowing I had a strong company and team supporting me, which made it easier.”

Ultimately, Alvarez proved to himself that he could thrive in a selling role on the supplier side of the industry, climbing the ranks to his role today.

Alvarez’s humble, team-oriented and honest attitude has very likely propelled him forward throughout his career. He is quick to credit his team and the company he works for. When asked whether he’s had any influential mentors within the industry, Alvarez can think of many but mentions two in particular.

The first is Leonardo Desentis, whom Alvarez worked with at Codere. Alvarez credits Desentis, director of marketing for Mexico, Panama and Colombia, for opening his eyes to more aspects of the business of business—persuading him to move out of data analytics and onto the marketing team.

On top of this, Alvarez loved witnessing Desentis’ leadership style. “Desentis always gave exposure and credit to his whole team,” explains Alvarez. “He always prioritized the human aspects of business, and I like to do the same thing.”

“Drew has a very quick mind, a huge personality, and has supported me from the start of our relationship,” says Alvarez. “He has become a good friend and I have learned so much from him.”

Young professionals looking to advance their careers in the gaming industry would be wise to learn from Alvarez’s example. When asked to impart advice for the industry’s next emerging leaders, two of Alvarez’s points seamlessly exemplify his career to date.

“This industry is dynamic, and you need to be learning and open to change at all times,” says Alvarez. “Find a good team to be a part of and make sure to always be a good team member yourself.”