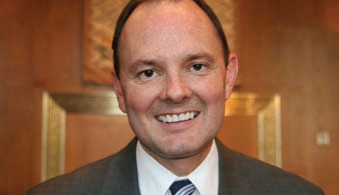 Recently Kevin Washburn, dean of the University of New Mexico Law School, took a sabbatical to serve as assistant secretary for Indian affairs, i.e., head of the Bureau of Indian Affairs.

He works under the philosophy that “Indian tribes can serve their citizens, in many cases, better than the federal government can,” according to the Chickasaw Times. His goal is to expand the Indian footprint in Washington, D.C., and especially inside the White House, beyond that of the BIA and Department of the Interior. The more people in the White House who represent Indian interests, the better, he says.

“This is a special time of opportunity in Indian affairs because of the many accomplishments of Congress and this administration,” Washburn recently told a congressional subcommittee. Some of those achievements include the permanent reauthorization of the Indian Health Care Improvement Act, several water settlements and the passage of the Helping Expedite and Advance Responsible Tribal Home Ownership (HEARTH) Act.

Now that President Obama has won re-election, Washburn hopes to push for increased tribal sovereignty when it comes to law enforcement.

He doesn’t see the agency making any dramatic changes in its approach to putting land into trust for tribes, especially as that relates to casinos. He does want to see legislation to address the Supreme Court’s Carcieri v Salazar and Salazar v Patchak rulings, which have put the brakes largely on tribes recognized after 1934 putting land into federal trust.

One thing he has changed his mind about is how much authority the National Indian Gaming Commission should have over Class III gaming. Seven years ago he advocated giving the commission more power. Now, he says that experience shows that tribes and state governments are doing a good job without the federal government looking over their shoulders.