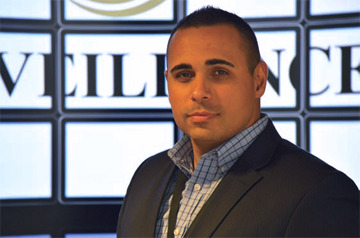 Breaking into and advancing in the gaming industry was a humbling experience for Joshua Anderson, the director of surveillance and technology for Cherokee Nation Entertainment.

Anderson had to look outside of his education and previous work experience to get an opportunity to work for his desired organization. “I was honestly looking for a way to begin my career with the Cherokee Nation, in any fashion,” explains Anderson. “My previous experience and educational background focused more on business management as opposed to a specific sector.”

“The biggest obstacle I faced was identifying ways to gain the respect of a staff that was older and much more experienced than me,” admits Anderson. “It was truly humbling as I was a cocky young man who thought I knew it all.”

Anderson was ultimately able to gain the respect of his peers, and has been able to advance through the security and surveillance ranks of the Cherokee Nation to his current role. He credits his decisions to move into, and stay in, the surveillance side of the industry as the most important decisions of his career to date.

“It has allowed me to see the potential of positively driving the business in a department that is not known for boosting revenue numbers,” comments Anderson. “For me, this role is the perfect blend of the business and the technology that helps drive and protect our bottom line.”

When considering his professional and personal mentors within the industry, Anderson is aware that he is lucky to have had several mentors. He believes two mentors, in particular, have had the most lasting impacts on his career. “My VP has been supportive, instructive, and has directed me toward a brighter future… He has an innate ability to motivate,” says Anderson. Additionally, Anderson credits a previous boss “who truly helped shape me as a person and a professional.”

Anderson further explains, “While there have been many, and I am thankful for them all, I will always be indebted to these two.”

Anderson believes the rapid technological advancement within the gaming industry presents an opportunity for emerging leaders. “The technological movement that is taking place opens many doors for a new generation that have grown up with the technology,” says Anderson. “They understand it better than most, and that is amazing leverage for a young man or woman looking to begin their career in this industry.”

Anderson’s advice for young professionals within the industry draws directly from his own experience. “Stay grounded and humble,” he says. “It is very easy to start in a career and want to be the best immediately. The quicker you realize you don’t have all the answers and that it is OK to lean on your colleagues, the better off you will be.”