Billions of dollars in new development is coming to Las Vegas, much of it designed to capture business travelers, who outstay and outspend other tourists. 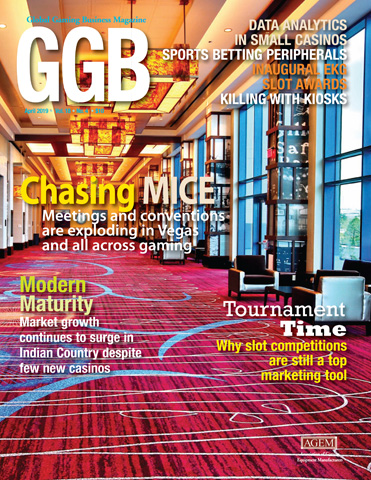 For Steve Hill, it’s a beautiful sound: the clamor of cranes, jackhammers, loaders and dozers on a major construction project. It’s a sound he can’t quite escape these days, as construction crews work to complete the $1.4 billion expansion and renovation of the Las Vegas Convention Center.

“I can look out my window and see the second and third floor of the meeting hall area taking shape,” says Hill, CEO of the Las Vegas Convention and Visitors Authority. “The pad has been prepared for the exhibition area. We started setting steel in March. We’re making good progress.”

That development and others in the pipeline—the $375 million Caesars Forum, the $75 million MSG Sphere at the Venetian, and the Strip’s first JW Marriott at the Drew—will serve a customer demographic that’s increasingly cherished by gaming operators: business travelers.

The Bigger the Better

In 2017, MICE—short for meetings, incentives, conventions and exhibitions—drew 6.6 million people to Las Vegas, or 11 percent of all visitors. Since 2010, convention travel to Las Vegas has risen nearly 50 percent, compared with an 8 percent increase for leisure tourists.

Recently completed projects in Las Vegas include the MGM Grand Conference Center. MGM Resorts now offers a staggering 4 million square feet of MICE space, all on the Vegas Strip, reportedly more than all the convention space in Manhattan. Wynn Resorts, meanwhile, has embarked on a development that includes a new 400,000-square-foot convention center expansion.

According to GLS Research, 79 percent of business travelers come to Vegas on a weekday, room alone, and pay a higher average hotel rate ($141.36). Better still, when they aren’t stuck in a conference room, those visitors spend more on average than their leisure counterparts; with most of their expenses on the company dime, their own money becomes play money. By one estimate, in total expenditures MICE delegates can contribute as much as four times more per visit than their leisure counterparts.

Without all the new development, the Las Vegas MICE segment may have been heading for a stall; there just wasn’t enough space. That’s all changing now, and for the better, says Hill. “There’s not only room to grow, but demand to grow. There are 3.5 million total square feet of meeting space under construction in (Las Vegas), and we’re excited about that.”

The business in Vegas is strongest from January to mid-May: the holidays are over, the kids are back in school, and more people have the chance to travel for work. “Then it flips on its head,” says Hill. “With family travel and school vacations, organizers tend to not schedule larger shows in summer. Then it picks back up from September and October and into November.”

Leisure tourists are apt to sidestep big trade-show weeks, when rooms and rates are at a premium—and that’s to the good, says Hill. “When you have CES in town at beginning of January, that tends to push the leisure traveler into a different week. Meetings help balance the leisure market.”

Trade-show and meeting attendees come from all over the world, building global branding, he adds: “About 16.5 percent of our total visitation is international, and it’s slightly more than that for conventions and meetings.”

The MICE Will Play

By this time next year, Caesars Entertainment will have opened its new $375 million Forum conference center, with 300,000 square feet of meeting space connected by skybridge to Harrah’s, the Flamingo and the Linq.

For Caesars, it’s a bit of catch-up ball. According to Chief Sales Officer Michael Massari, “If you were to build a new facility in this market today, you’d build it with a quarter million square feet of meeting space and a 2,000- to 3,000-room hotel. When we built the Flamingo, Harrah’s and the Linq many years ago, we didn’t do that, and we knew we wanted to have meetings and event business as part of the offering at those properties.”

But networking and PowerPoints are just a prelude to the larger experience. After the meetings adjourn, the suit-and-tie crowd will be able to spill out of the Forum and onto the Linq Promenade, an entertainment corridor crammed with bars, boutiques, clubs, a zip-line attraction and of course, the 550-foot-tall High Roller, the largest Ferris wheel in the world.

“The goal is kind of this campus mentality—the hotel, the restaurants, the shopping, the High Roller, the Forum all within easy walking distance,” says Massari. “It’s probably the next evolution of the integrated resort—an IR, but bigger and broader and utilizing more partners, which always enhances the outcome.” In a smart move, Caesars put all the meeting space on one level, so organizers, vendors and attendees can get in and out quickly.

A lot has been made of the facility’s two massive pillarless ballrooms (according to Caesars, each is equal in size to 27 tennis courts or three hockey rinks). Though the spaces will easily seat groups of 10,000, groups of 50 “won’t get lost in the shuffle,” promises Massari.

Then there’s the outdoor meeting space—all 100,000 square feet of it.

“The literature about getting outside (to enhance) learning is quite robust and almost unanimously accepted,” observes Massari. “While I think the space will ultimately be used for breaks, I also think somebody will wake up on a Tuesday with a general session for 5,000 people scheduled on Wednesday, look at the weather and say, ‘You know, it would be great to have our general session outside. Can we do that?’ And the answer will be yes.”

It’s just one example of the company’s increasing presence in the meetings industry; Caesars is developing conference centers in Dubai, Puerto Los Cabos, Mexico and at Harrah’s Cherokee in North Carolina. This year, the company will complete a $56 million renovation of its Harrah’s Waterfront Conference Center in Atlantic City, the largest conference complex on the East Coast.

Though virtual meetings, teleconferences and webinars cost next to nothing and are commonplace these days, Massari is confident they’ll never replace on-site gatherings, as long as organizers deliver the goods: the right destination, the right vibe, comfort and connectivity, and of course, a great after-party.

“Meeting face-to-face today isn’t that much different than meeting 10 years ago or thousands of years ago when the Romans gathered in the Forum,” he says. “They’ve evolved to be more participant-oriented, and that’s appealing for all generations. It’s a change with the times.”

By the way, the acronym MICE has started to give way to ME, for meetings and events, handily sidestepping the rodent reference. Another term that’s being bandied about is “bleisure,” for the business-and-leisure guest. It’s a concept to remember, but a word to forget.

Last year, the Pechanga Band of Luiseño Indians completed the $300 million expansion of its Pechanga Resort Casino in Temecula, California. In addition to 560 rooms and suites and a 4.5-acre pool complex, the tribe added new meeting and event space, including the 40,000-square-foot Pechanga Summit.

Depending on the business opportunity, it’s as necessary a trend in tribal gaming as in commercial, says Katherine Spilde, gaming expert and associate professor of the L. Robert Payne School of Hospitality & Tourism Management at San Diego State University.

“As the market gets more competitive, both between tribal properties and with the evolving IR model in nearby Nevada, tribal governments are investing in casino upgrades as well as new and improved non-gaming amenities: upscale hotels, spas, golf courses, conference spaces and retail. This evolution is in line with the casino product life cycle, where gaming activities become less important and amenity offerings can provide a competitive advantage.”

Global Gaming Business talked to Pechanga Resort General Manager Lee Torres about the impact of the expansion, which made Pechanga the largest casino resort on the West Coast.

GGB: When did the tribe decide it was ready to grow?

Torres: Before the expansion, we had 517 hotel rooms and were essentially booked 100 percent of the time. We got a lot of inquiries from groups who wanted to visit and had to turn away business because we couldn’t accommodate it. That helped us finalize our decision to add 70,000 square feet of meeting and event space and significantly enhance the pool and spa experience. We also added two new restaurants. It was putting a lot of pieces into play and saying, “OK, let’s check all the boxes and give the trade shows and conventions what they’re looking for.”

The amenity set we wanted to bring on would have to appeal to the gaming customer but accommodate the needs and the expectations of business travelers. So we added a 4.5-acre pool complex called the Cove with multiple pools, 27 cabanas, two water slides—it’s a great space that can be used for all kinds of events. We added a two-story, 25,000-square-foot stand-alone spa just rated four stars by Forbes. On the fourth floor we put a green roof with different types of florals and vegetation that also can be used as a meeting room.

A spa, golfing, pools—are these in demand by the business crowd?

Anyone who attends conferences and trade shows knows you roll up your sleeves and go, but once it’s done, you’re ready to relax.

We have a truly one-stop shop here: if you want golf as part of your experience, we have Journey, a championship golf course, one of the best in California. At Pechanga Summit, you could have a trade show one day and a concert for 3,000 the next day. That’s given us some flexibility. And the pool and spa have been real home runs for us.

We’ve booked 450 groups and conventions since we opened and are already getting repeat business.

It might be more accurate to call Adelson the big cheese.

He’s the guy who made meeting and convention spaces a staple of the gaming industry. He’s the guy who coined the term MICE—for meetings, incentives, conventions and exhibitions—a pioneering model that’s becoming the standard at commercial and tribal gaming resorts around the world.

In the 1970s, Adelson was a leader in the trade show industry. His company, Interface, brought the Computer Dealers Expo to the MGM Grand and made it the biggest annual convention in Las Vegas. Ten years later, when he bought the Sands Hotel and Casino on the Las Vegas Strip, Adelson was less interested in the hotel and casino than in the chance to build a convention center next door.

The following year, he did so. The Sands Expo and Convention Center, which now adjoins the Venetian, remains one of the largest privately owned convention centers in the world at more than 2 million square feet.

He’s replicated the model in Macau and Singapore and, given the chance, will doubtless do so again in Japan.

In the casino industry, with gaming a smaller slice of the revenue pie, MICE helps make up the difference—and then some. According to Allied Market Research, the meetings business worldwide accounted for $752 million in spending in 2016 and could reach $1.245 billion by 2023.