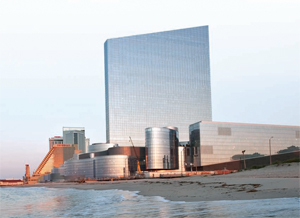 It’s been many years since Kevin DeSanctis left Penn National Gaming to pursue his dream: a new Atlantic City resort that would turn the city’s casino model on its head. That dream will be realized when Revel opens for business on April 2.

DeSanctis, the Revel president and CEO, has endured many hurdles, including a severe economic downturn, the exit of his financing partner, Morgan Stanley, and the fierce opposition of the city’s largest employee union, Local 54 of UNITE HERE. April 2 will mark the first day of an eight-week preview that will conclude with the official grand opening of the property on May 25, just in time for the Memorial Day holiday weekend, officially the start of the summer season in Atlantic City.

Of his commitment to getting the property completed, DeSanctis says, “Maybe that just means I’m stubborn.”

If that’s the case, DeSanctis worked a miracle following the departure of Morgan Stanley. After spending $1 billion building the shell of the building, Morgan Stanley decided that no more money would be invested and walked away. DeSanctis spent months on a road show trying to convince other lenders to pony up capital to complete the project, which was estimated to cost at least another $1 billion.

It wasn’t until the election of Chris Christie as governor of New Jersey that DeSanctis was able to secure financing, bolstered by Christie’s commitment to the revival of Atlantic City and the completion of Revel. Christie offered the property some tax breaks, which gave investors confidence that the property could indeed be profitable.

As it had for the length of the development, Local 54 opposed the tax breaks, going to court to reverse the decision. And as in many previous instances, the culinary and hotel union was unsuccessful. Revel will open with no union representation for its hotel workers. And if there ever is a move to be represented, it won’t be by Local 54.

“Local 54 has tried as hard as it could to kill this project,” DeSanctis say, admitting that they have been unrelenting. “I have nothing to talk to them about.”

Since resuming construction more than a year ago, progress has been swift and comprehensive. Most of the property is now completed and the only question that remained was how much earlier it would debut than the previously announced opening date of May 2012.

DeSanctis says the eight-week period before the grand opening will be like a shakedown cruise.

“I’ve opened enough new properties in my career to know that a lot of things are going to go wrong,” he says. “We’ll use that eight weeks to fix anything that goes wrong, but realistically, I don’t expect that to be completed much before July 4, when you really have to be hitting on all cylinders to be considered a success.”

The eight weeks will be productive, according to DeSanctis. April 2 will see seven of 14 restaurants open, with a new one added every week or 10 days after that.

While the property’s three pools will be ready, it’s unlikely many people will use them, given the relatively chilly temperatures in Atlantic City in early April (although the indoor/outdoor pool is heated). The spa also will be open, but the three-story nightclub, being managed by Angel Management Group of Las Vegas, will not be ready until May.

Revel will be Atlantic City’s first “smoke-free” casino, prohibiting smoking in any part of the casino or hotel, and DeSanctis says that gives him pause.

“Any time you do something different, you’ve got to be concerned,” he says.

The only area of Revel where smoking will be permitted is on an outdoor deck of the three-story nightclub, specifically designated for smoking.

“We didn’t want to have any areas where people would just be passing by and be disturbed by smokers,” says DeSanctis. “So we’re a bit concerned, but we are committed to the policy.”

Atlantic City casinos are permitted to set aside 25 percent of their casino floors for smokers, but in reality, smokers roam the rest of the casino with no enforcement procedures in place.

“We decided that rather than figure out how to enforce the 25 percent, we’d just open smoke-free,” he says. “We’ll see how that works out.”

With a wide variety of non-gaming amenities, DeSanctis says the property’s business model is different from other Atlantic City casinos. While he wouldn’t predict the breakdown between gaming and non-gaming revenues, he admits that gaming will still play the key role in the revenue story for Revel.

“Gaming is still the revenue engine,” he says. “But our gaming customer won’t be the typical Atlantic City customer. We expect to get a large share of our gaming revenue from some of the market segments that we target.”

DeSanctis identified those segments as leisure/lifestyle consumer, group/meeting customer, high-end gaming consumer, day visitor for entertainment and dining and day visitor for gaming. He says 75 percent to 80 percent of the business will come from the walk-in customer, but he expects to grow the other segments quickly.

“We’re going to ramp up quickly,” he says. “By virtue of our position in the Northeast U.S., it’s not going to be a surprise that we’re open. People will sign up for players club card when they arrive for the first time. Whether they use them is another story, but our database will grow quickly.”

He does admit, however, that promotional expenses will be significant, which is in line with the level being reported by other Atlantic City casinos.

Revel’s plan is to comp 50 percent of its hotel rooms with the rest being sold retail. And DeSanctis says he expects 21 percent of Revel’s room nights to be sold to group customers in the hotel for meetings and conventions.

Revel will introduce a variety of new technology to Atlantic City to better service its clientele.

“We use technology to serve our guests across the resort—from self-serve check in to get you to your room quickly to android tablets in every guest room to control your environment or wake you up in the morning,” DeSanctis said. “Our CRM system will keep track of guest preferences so we can personalize their experience and suggest amenities and activities that connect with their passions.”

He also says that Revel will produce “very substantial” food and beverage revenue.

While there are still some announcements to be made regarding restaurants, the outlets already confirmed are impressive, operated by such chefs as Iron Chef Jose Garces, who will open three restaurants at Revel. New York institution Lugo Caffé will offer a fresh take on modern Italian classics featuring Chef Stefano Chiarug. Azure by Allegretti is Chef Alain Allegretti’s take on French and Italian Mediterranean cuisine. Award-winning chef and master of Belgian cuisine Robert Wiedmaier opens the first extension of his popular gastro-pub, Mussel Bar, outside the Washington, D.C. area. Another Iron Chef, Marc Forgione, brings American Cut, a modern and signature take on fine dining with the comforts of the new American steakhouse. DeSanctis says two other restaurants will be announced soon.

What Revel will not have is a buffet.

“I haven’t seen any buffet experience that has surprised me over the last few years,” says DeSanctis. “If someone shows me something unique, I’ll consider it, but for now Revel will open without a buffet.

While Revel plans to offer more than 40 retail outlets, DeSanctis was not ready to commit an opening date for those stores.

“We will have seven retail ‘living rooms,’” he explains, about 20,000 square feet of retail space. “We want it to be experiential. We want to make sure that you can’t walk through it once and say you’ve seen it all.”

Also unique at Revel will be the incorporation of the natural beauty of Atlantic City. Situated on the edge of a pristine beach (with 200 yards of recently reclaimed sand), Revel visitors can enjoy the outside while being in a luxurious interior environment.

“We’ve achieved a balance between fabulous interior spaces and great vistas,” he says. “We bring the outside in.”

With multiple decks and large windows overlooking the Atlantic Ocean and the  Boardwalk, Revel incorporates the natural beauty as no other Atlantic City casino has ever done.

DeSanctis, meanwhile, isn’t bragging about his “vision,” which is about to be realized.

“I’m not so sure about that ‘vision’ thing,” he says. “From the beginning, however, I always said the last thing Atlantic City needed was another casino. And we hope that we’ve added something that is much more than just another casino.”