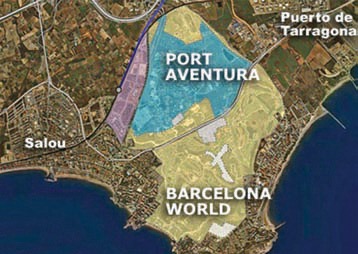 BCN World plans to break ground this year on a six-casino resort complex outside Barcelona.

The vision for Barcelona World, as it’s called, includes 18,000 hotel rooms at full build-out and an array of leisure attractions spread across 1,500 acres. The projected cost is US$6 billion.

Barcelona was the city Las Vegas Sands turned down in favor of Madrid for its equally grandiose EuroVegas.

“Mega-resorts are nothing new except in Europe,” said Ivar Yuste, a partner at Madrid-based consulting firm PHG Hotels & Resorts. “The idea is to create a destination where there is nothing and where land is cheap. BCN World is in a great location. Disney was considering that same area in the region of Catalonia for its European theme park before deciding on Paris.”

“In the coming months, we shall continue to work with Veremonte on the definitive casino management agreement and shall make announcement when the agreement is signed,” Melco told English-language Macau Business Daily.

Barcelona Dream, as the first phase is called, will occupy 3.2 million square feet and feature 1,100 hotel rooms operated by Meliá. Opening is slated for 2016.

Adelson’s EuroVegas, pegged at about $30 billion at full build-out, envisions a complex of 12 resort hotels with six casinos, convention facilities, golf courses, shopping malls and other attractions. The first phase is slated for completion in 2017.

In June, parent company Las Vegas Sands officially registered plans to build the complex, located in Alcoron about 10 miles south of Madrid. But construction has been delayed while LVS waits for the central government to approve a controversial exemption to the country’s ban on indoor smoking.

Analysts, in the meantime, remain guarded about both projects.

“I think that down the line it will prove there just isn’t enough business for two gaming mega-resorts so close together, and we could see both of them downscaling their plans,” said Yuste.

Russell Kett, chairman of HVS in London, agrees. “It remains to be seen whether the two of them will prosper, but both sites have good weather, a pleasant environment, good (transport) connectivity and government support.”