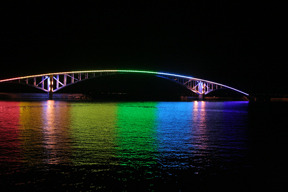 The Taiwan legislature has passed a bill that contains a measure to allow casino development on offshore islands, should a majority of the local population agree.

The measure was included as an amendment to the Remote Island Development Act, which seeks to encourage investment on several of Taiwan’s smaller, economically challenged islands.

Taiwan’s Committee for Economic Planning and Development-CEPD-in December released a list of recommendations which could influence the yet-to-be-written casino legislation. Suggestions include requiring a minimum investment of $1 billion, minimum land area of 10 hectares and that the project is an integrated resort in the style of the two Singapore projects, Marina Bay Sands and Resorts World.

CEPD also suggested a gaming license be valid for 20-30 years, a gaming tax of 10 percent and a special allowable operation tax of 5 percent.

The outlying islands referred to in the bill include the Penghu archipelago, which is about midway between Taiwan and the Chinese mainland, and the islands of Kinmen and Matsu, near the mainland’s Fujian Province.

The three main islands of Penghu County are seen as the most likely candidates for casino resorts. The local government there recently announced vague plans for one project, but some believe that issues such as land acquisition and zoning make such a development more of a hope than a probability. The two locations named by the county government as likely sites of the project are Houliao Bay on Baisha Island and the Huhsi Port area on the main island of Makung.

The company farthest along in planning is AMZ Holdings Plc, which began the process of acquiring land on the main island of Penghu as far back as 1999. The resulting 10.8-hectare property has been rezoned from agricultural to commercial use. AMZ’s original plans include a 600-room luxury hotel and a casino of minimum 130,000 square feet. However, the company says it will adjust its plans to conform to whatever regulations are eventually laid down.

In addition to AMZ, other companies have shown an interest in the islands, including Lawrence Ho’s and Jamie Packer’s Melco Crown, MGM Mirage and Galaxy Entertainment. Sheldon Adelson’s Las Vegas Sands is holding out for a casino resort in the capital city of Taipei, when and if it is ever approved.