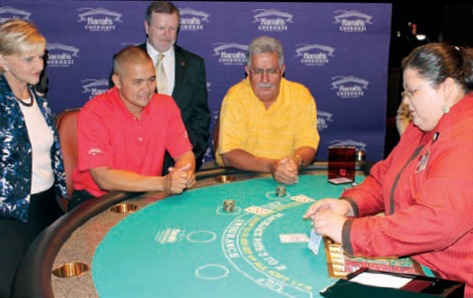 The U.S. Interior Department has OK’d an amended gaming compact between the Eastern Band of Cherokees and the state government, allowing dealers to helm the table games at Harrah’s Cherokee Casino in North Carolina.

The change has added 25 live games including blackjack, roulette and craps to 40 digital table games. Harrah’s plans to add 100 more live tables by late November. Traditional slot machines also will be added to the mix.

The compact expands the tribe’s gaming enterprise and will create hundreds of new jobs at the property.

Principal Chief Michell Hicks hailed the expansion, saying, “The tribe now has the opportunity to increase jobs in the region and enhance opportunities for our tribe and for our neighbors. This compact is the result of hard work by tribal leaders, the support and partnership of the leadership of the state of North Carolina and the work of our employees that make our gaming enterprise a success.”

The gaming compact was signed by Governor Beverly Perdue in June. The state’s portion of the revenues—estimated at $2 million to $3 million the first year—has been earmarked for public education.

The casino opened 15 years ago. According to the Asheville Citizen-Times, the live games come near the end of an eight-year, $650 million expansion that added upscale restaurants and shops, a new event center, new hotel rooms and a spa to the casino.

Now, said Brooks Robinson, the casino general manager, “This property can compete with any casino property out there.”

The casino employs about 2,300 including 500 new dealers.