Echo Entertainment is now the name of the operator of Sydney's Star City and three casino resorts in Queensland. 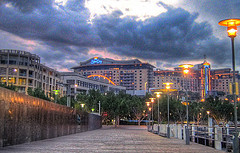 The move received overwhelming approval from shareholders last month with 92.4 percent representing 99.6 percent of the stock voting in favor of the plan.

Later, the Supreme Court of Victoria gave its approval of the demerger, paving the way for a potential launch of Echo Entertainment on the Australian Securities Exchange on June 6.

Echo Entertainment shares began trading on a deferred settlement basis under the symbol “EGP” on the Australian Securities Exchange on June 6.

The demerger was implemented formally and shares of Echo transferred to eligible shareholders on June 15.

All eligible Tabcorp shareholders will be receiving one share of Echo for each share of Tabcorp they own, in addition to retaining their original Tabcorp shares.

Tabcorp will continue to operate those segments of the business involved in wagering on sports and horse racing, non-casino slot gaming and keno.

Under Tabcorp, the company began a program of new investments and expansion at the four properties, including A$960 million to upgrade Star City and A$625 million being spent on the Queensland casinos.

The Sydney Morning Herald reported that before the vote, John Story, chairman of Tabcorp, responded to a question from a shareholder about whether the demerger would make either company attractive for takeover bids.

Story said that while such an outcome was possible, it was not an objective of the demerger.

“It would facilitate corporate activity or consolidation,” Story said. “If there are people within the wider markets who believe they can extract better value and they’re prepared to pay a premium, then there should be a takeover.”

The Australian reported that James Packer’s Crown Limited, which some have speculated might be interested in a takeover of Echo, might instead be eying opportunities elsewhere for the time being.