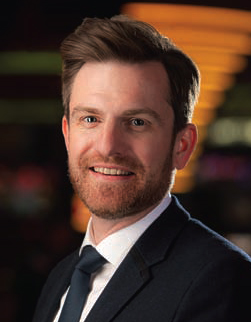 From chef to emerging leader in gaming, Brad Egnor has shown the true value of building work experiences with education, having the curiosity to learn new markets, and staying dedicated to grow as a leader.

Egnor’s initial passion stemmed from the culinary arts. After he worked as a chef for the 2002 Olympics, the BroAdmoor Estates, 6 Degrees in Nashville, Tennessee, and a French restaurant, The Orangery, Egnor decided to pursue a bachelor’s degree in consumer science from the University of Tennessee to further diversify his education.

As graduation approached, Egnor attended a career fair where he was first introduced to the gaming industry. At the fair, Egnor met representatives from Caesars Entertainment, and with his versatile background in back-of-house operations, a culinary degree, and what was soon to be a bachelor’s degree, Egnor was offered a position in food and beverage in Tunica, Mississippi. In F&B operations, Egnor was faced with a new challenge of working directly with customers and developing the skills of running a business operation, while learning how to efficiently supervise team members.

After two years as a food and beverage manager, Egnor transitioned to an analyst position in financial planning and analysis for the Mid-South Region to continue developing analytical approaches to business problems, fluid presentation skills, and the capacity to understand system architecture.

Within his four years with Caesars Entertainment, Egnor had worked his way up the corporate ladder to procurement and contracts manager for the Mid-South Region, while continuously working to build a versatile foundation. For a brief period, he stepped away from the gaming industry to help run a winery at the Montaluce Winery & Restaurant in Georgia as the director of marketing and operations.

Following his foray into the wine industry, Egnor transitioned back into the gaming industry by accepting an offer from Genting, at Resorts World Casino New York City as a financial planning and analysis manager. While building out the team in finance, Egnor worked closely with marketing to build out the SAS suite, conducting analytic reporting on promotions and database performance, as well as segmentation strategies.

Through this work, Egnor found the drive to become a marketing leader and moved into the division as the director of marketing. After two years in this role, Egnor went back to school to obtain a master’s degree in business analytics from New York University while working full time at Resorts World. This step was crucial for his next career move, and would help to gain new insights on how to improve his strategic decision-making skills.

While working in marketing, Egnor found a mentorship with Missy Lawrence, who at the time was the vice president of marketing, having encouraged Egnor to take the leap and transition to the marketing department.

Lawrence’s strong trust in Egnor was crucial in allowing him to make prudent decisions quickly and effectively, which eventually landed Egnor the position of vice president of marketing at Resorts World Casino New York City. After working for eight years with Genting and developing marketing strategies with all the casinos in the Genting U.S. portfolio, Egnor transitioned over to San Manuel outside of Los Angeles as the senior vice president of marketing.

Egnor attributes much of his success to his mentors, Ed Farrell, Missy Lawrence, Scott Molina, and Rikki Tanenbaum, stating that “the most powerful attributes these crucial mentors were able to convey (in him) is trust.”

Throughout his career, Egnor has found that the most essential trait for any professional to achieve success is the ability to be a “Swiss Army knife of a leader.” As he notes, “This allows you to work across verticals to learn a variety of roles and skills, which is critical for early professional development.” It also allowed him to personally “chart unique, cross-functional career paths” which led him to the success he has today.