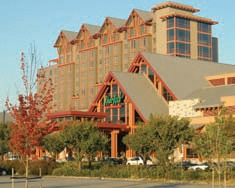 An investigation of two Canadian casinos by CBC News has uncovered what the news organization called “suspicious cash” alleged to be “gang money” circulating through the gaming halls.

During the three-month probe, almost $27 million in dubious transactions were documented at two British Columbia casinos, the River Rock in Richmond and the Starlight in New Westminster. Ed Rampone, former head of casino investigations with the provincial Gaming Policy and Enforcement Branch, called it money laundering. “It’s eye-opening and shocking to see the volume that it’s reached,” he said.

Hundreds of reports noted the flow of suspicious cash, mostly in small denominations, CBC reported, but law enforcement was never summoned. “The failure to do anything about it and just continue to rubber-stamp this and pass it on as intelligence—its bordering on negligence,” Rampone said.

In some cases, casino customers arrived with shopping bags and suitcases full of 20- and 50-dollar bills. One person brought in $800,000 in 20s. Another carried $1.1 million in cash.