Are playing-card manufacturers watching our backs? 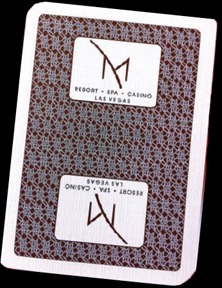 In recent years, there’s been a huge increase in the number of casino table games around the world that allow players to handle the cards. From the masses of high-limit baccarat “squeeze” games in Macau to the lower-limit poker derivative games in Vegas party pits, an increasing amount of players’ DNA can be found in our discard holders.

But this isn’t a story about holding hands and transferring bodily fluids. This is a cautionary tale about the increasing threat of marked cards. Not by players bending, crimping, juicing or inking the cards at the table but by the companies who manufacture our cards.

I’m not suggesting that card manufacturers are purposely marking cards with the intent to collude with players or casino management to rip off casinos. In 1999, a South African card manufacturing plant was compromised by a rogue employee who “altered” the printing plates.

All the Aces and 10s of an unsuspecting casino were marked, giving the employee and his friends an advantage on all the blackjack tables. The scam was eventually picked up after casino management noticed the blackjack hold percentage dropped 3 percent over an extended period. Investigators believe the scammers also sold the information to gamblers for a flat fee. That was the industry’s first major wake-up call for the need for tighter security measures and controls in casino card manufacturing plants.

The current threat is less sinister in intent, but mired in negligence and—dare I say it?—economics. It involves the quality of manufacturing, or more specifically, the lack of.

Over the last few years, it appears an increasing amount of playing cards are being shipped to casinos with back designs that can be exploited by clever advantage players. The back designs are flawed because they have been badly cut during the manufacturing process. The badly cut cards result in a non-symmetrical appearance that may be exploited by “edge sorting” and “playing the turn.” In layman’s terms, the cards are being marked at the manufacturing plant.

To get an idea of how bad it has become, last year I visited the Gamblers General Store in Las Vegas and bought used decks of cards from nine major Strip casinos. Five of the nine decks were badly cut to the extent that they could have been exploited and used in an edge sorting scam. This good deck-to-bad deck ratio is actually a little lower than the 70 percent of badly cut decks I discovered firsthand in my visits to casinos around the country in the last year.

To understand the problem, we must understand the importance of the back design of a casino playing card. The design should be symmetrical. If you took a pin and poked it in the middle of the back of the card, then turned it 180 degrees, it should look exactly the same as it did before you turned it. If it doesn’t, your casino may be exploited by smart advantage players using a method known as playing the turn.

Here’s an example. A casino uses a back design that shows an arrow pointing upwards. As the cards are dealt from the shoe, players can see that the cards are all faced the same way by looking at the backs of the cards. If a player or dealer was to turn favorable cards 180 degrees, they would be able to identify them before they were dealt because the arrow would be pointing in the opposite direction. By sorting the cards and playing the turn, players can gain an advantage over the house primarily by identifying the first card out of the shoe or knowing what the dealer’s hole card is.

Although there is an infinite number of custom back designs available, they can be broken down simply into three categories: full pattern, bordered edge and faded bordered edge. Full-pattern cards are the most common in casinos. A lot of them are referred to as diamondbacks, as they usually have some sort of geometric diamond-like pattern that covers the entire back of the card. Bordered-edge cards use patterns but have borders around the edge of the card. The faded bordered-edge cards are similar, but the border fades into the inside pattern, giving a blurred effect.

Here is the problem. If the manufacturer does not cut the cards precisely, the edges of the cards will not look the same on both sides. In other words, the cards will not appear symmetrical, and therefore, the integrity of the game can be compromised through “edge sorting” and “playing the turn.”

The easiest back design to sort if badly cut by the manufacturer is the full pattern or diamondback. Usually, an advantage player can spot the difference on opposite edges by the size of the diamond—i.e., half diamond, full diamond. To minimize the risk, it is commonly thought that a bordered edge is better. Not really; in some cases, the difference of border widths from the edges can stand out even more.

For old guys like me, it’s sometimes easier to spot a thick white stripe on one side and a thin white stripe on the opposite. Probably the best type of card to minimize the risk of bad manufacturing is the faded border edge. It’s difficult to get a read on a badly cut card because of the blurry design. I’m not saying they’re always perfect. Sometimes flaws in the inside pattern design of all cards can be identified. I’m just saying if all inside patterns were equal, the faded border edge would be my choice.

How Casinos Are Being Ripped Off

Baccarat is the game of choice when it comes to edge sorting. The “game of kings” offers the highest limits in the casino and therefore the highest risk-to-reward ratio. Although the nuts and bolts of edge sorting have been explained, the biggest question and challenge is: How do the advantage players turn the cards on baccarat?

The turn can only be played if the cards are used more than once, so that means cards must be sorted on a face-up game. So, how do the players turn the favorable cards when they don’t get to handle them? Simple—they get the dealer to do it.

The scam starts with the “sorters” identifying a casino that is using badly cut cards. Once identified, the leader of the team will contact casino executives (usually a VIP host) and request a reserved mini baccarat table for a big player associate who has a large amount of money to gamble. But just before the host can ask where to send the limo, the player’s representative makes a special request.

The host is told the big player likes to play a “special way,” and they would like a dealer who speaks Mandarin and a table that utilizes a shuffling machine. It seems like a harmless request at first, but when the players arrive at the casino, things start to get interesting.

After choosing a table, the player’s representative requests that the dealer deal the first four cards face down. The dealer is then instructed to tilt each card back to expose the value to the player. At this stage (this is where it gets good) the dealer will then be instructed to either turn the card over or rotate it 180 degrees and then turn it over. If a fifth or sixth card is drawn to the hand, the dealer is asked to expose the cards the same way.

The player will place relatively small wagers during the first shoe. This phase of the scam is essentially the set-up phase, where the team is coaching the dealer to turn the Six, Seven, Eight and Nine cards. As standard procedure dictates, cards are always placed in the discard holder and shuffling machine the same way, the players have effectively used social engineering to sort and “mark” the high cards.

Moving forward, the team will probably play the next shoe (the other eight decks of cards that have not been sorted) for a few rounds before requesting management to shuffle up. They may make up an excuse like the blue cards are not as lucky for their big player as the red ones. Of course, their motives are purely to get the eight decks that have been sorted back onto the game.

Once the set of sorted cards is back in play, the players make one more key request. They want to place their wager after the first four cards are dealt face-down. The acceptance of this rule change seals the deal for the scammers. Having turned the high cards, they can now identify where they are before they place a wager and gain an edge over the house by playing a mathematical strategy referred to as the baccarat hi-low strategy. This strategy can be found on Dr. Eliot Jacobson’s website, www.apheat.net. Jacobson is a math professor and a leading expert in casino advantage play strategies.

In the last two years, a team of players has taken a number of major high-end casinos around the world for millions of dollars using the above modus operandi. There are three keys to their success: 1) Finding a casino that uses badly cut cards on their high-limit baccarat games. 2) Finding casino executives who are willing to bend the rules and procedures. 3) Finding a casino lacking game protection knowledge and expertise.

The solution is obvious. Don’t buy badly cut cards. If you read this article and decide to conduct an audit of your card inventory and find you’ve been sold a bad batch, there is a temporary Band-Aid solution. Add a turn in your shuffle procedures. This will mess up any sorting sequence that may have been introduced by a player or dealer.

Keep in mind that baccarat is not the only game that can be exploited with edge sorting and playing the turn. Other card games can be taken advantage of using sorting techniques. In blackjack, if you sort the Aces and 10s, you can sit on first base and have a field day with a 52 percent advantage when you know the first card out is an Ace or a 13 percent advantage if you know it’s a 10. The edge gained by knowing the dealer’s hole card is quite substantial too.

The root of the problem lies with the manufacturer, and as an industry we should demand better. But the ultimate responsibility for the integrity of the game should lay with casino management. The fruit shop owner doesn’t blame the plantation if the banana is rotten.

The responsibility starts with the person who signed off on the back design of the card. This person should have game protection expertise and understand the need for symmetry. I often hear stories of how purchasing and marketing people choose the back designs without any input from gaming or surveillance managers.

Do your due diligence. Does the manufacturer you are looking to have the appropriate security and quality controls in place? The Atlantic City Golden Nugget fiasco last year highlighted the deficiency in quality controls of a card manufacturer when the pre-shuffled cards they purchased were not pre-shuffled. A group of baccarat players noticed the predictable sequence and went on to win over $1.5 million.

Casino management should be vigilant when it comes to manufacturer defects and flaws. A quality control process should be in place to cross-check the manufacturers’ work. I recommend the creation of a gaming equipment manager to oversee research, development, procurement, storage and quality assurance of all gaming equipment. This would include cards, dice, roulette wheels, chips, shoes and shuffle machines.

Above all, educate your gaming and surveillance people to identify and recognize the threat of marked cards. Casinos are churning through large amounts of cards these days, but we have to be careful that we don’t become complacent when it comes to quality and security. Watch your backs.