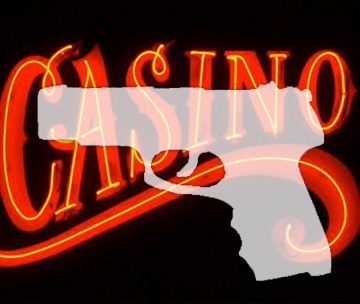 The recurring events over the last few years demonstrate even more what law enforcement already knew. There are people who can and will some day come into a business, including a casino, and just start shooting and killing people with some form of semi-automatic weapon. The fact is any semi-automatic gun can fire rounds as fast as a person can pull the trigger.

The question you should ask yourself is: “Are my facility and team members prepared to deal with an active shooter event?”

The tragedies of the theater in Aurora, Colorado and the Newtown, Connecticut grade school shock most people because of the nature of what they did. The massive press coverage in the U.S., with satellite trucks and reporters, unfortunately continues to encourage future events for the infamy a perpetrator may desire.

Many people have become hardened to the news as long as it does not touch them personally. We feel sad and even try to help, but do we do enough to prepare our workplace or our families for what the bad guy may do?

The reality in gaming environments is that we remain a “soft target,” in that casinos have multiple ingress/egress points where the bad guys can enter with arsenals beneath their clothing and start carnage at any moment. North American casinos have resisted the concepts of target-hardening to include metal detectors and screening much like TSA performs. Many properties already conduct screening into night and day life environments with their four walls.

Is your casino as prepared to deal with an active shooter event before, during and after one occurs?

In most situations, the best predictor of events is the past. If criminal activity occurs regularly at your property and nothing substantial is done to mitigate it or reduce the opportunities, it will continue to occur. It is quite different in active shooter or similar events.

In an active shooter incident, it is very rare that a person just snaps and starts killing people spontaneously. Most experts agree that the perpetrators of these murderous crimes plan them over long periods of time, and there are clues and indicators that just went unnoticed.

You cannot predict when and how a shooting event will occur, and that makes it difficult to plan to prevent it. There are, however, many things that can be done to train and educate team members in what to do during a major incident involving a gun.

The United States Department of Homeland Security developed a very effective program to teach people basic survivor skills during an active shooter event. The program is free, and anyone can obtain the pocket cards, posters and collateral materials in different languages. All employees should know what to do to for optimal survival in the event of a shooting rampage.

Some executives say they do not want to train rank-and-file employees on active shooter events, and only train their security personnel on what to do. Some general managers say it would only scare the staff. Unfortunately, that approach will get people killed if they don’t know what to do. If implemented correctly, it can be a great employee relations program to show all team members what to do whether they are at work, the mall, the theater, restaurants or anywhere else shootings have occurred. Demonstrating you care for your employees is the definition of employee relations.

Workplace violence programs can easily incorporate active shooter training into the mix. Reporting unusual behavior including comments, drawings, actions and attitudes is the greatest chance for intervention during the planning phases of the active shooter. They can also be deterred during this phase in different ways. Once they are armed and loaded for the kills, deterrence is typically not an option.

There are five phases to an active shooter event: the fantasy, planning, preparation, approach and finally the implementation phase, when it is too late. Having solid proactive and highly visible security can interrupt the successful processes of planning and preparation of the active shooter. The most success in preventing a potential active shooter is during these initial planning stages.

Simple approach and inquiry can discourage the perpetrator. Questions such as, “Hi, you seem to be looking for something; can I help you?” have proven value to reduce crime through deterrence. The perception by the perpetrator that he is being watched and could be identified could have a life-saving effect. Security personnel should always attempt to deter and deflect potential criminals from their property through proactive and visible security presence.

Too often the employees, including security personnel and managers, lose patience and treat people badly in negative situations including trespass, terminations or disciplinary actions that start the process of revenge or other motivation to commit murder. Taking a person’s livelihood from him in a struggling economy may start a process of desperation, which is accelerated if it is done poorly and with perceived malice.

Once an event starts, it occurs rapidly and with deadly results. The immediate actions of staff will mean the difference in how many people are killed or injured. Simply put, if team members just tell people to get down or hide behind a kiosk or slot bank and protect themselves and anyone within their voice, much has been accomplished.

Casinos have many things that can be put between a shooter and a target. Regardless of what it is, anything that can slow down, deflect, or stop a bullet from killing someone should be used. Slot machine banks, signs, stools or anything available can be used. Lying prone instead of running might make you less of a target.

Sheltering in place are options that include restrooms, closets, back rooms or offices where a door can be locked or held shut in some fashion. Because the actual shootings do not typically last longer than a few minutes, these options are viable for survival. It is uncommon for shooters to enter a restroom, for example.

The New York Police Department compiled a compendium of over 1,000 active shooter events that every security and surveillance professional should download and read. It can be found at www.nypd.com. The Federal Bureau of Investigation has yet to publish a profile of a typical active shooter because of the wide variables in targets and actions. The one thing that is clear from history is that it will continue to occur.

Having a post-incident plan is the easiest part of the process. Multiple triage locations to treat the wounded and stage for ambulances will save lives. Remember that the responding paramedics and other emergency medical personnel will not enter until the police have rendered it safe. Those ambulances will not be there to help you until later.

History also tells us that cell service becomes problematic due to the massive amount of communications, texting, photographs and many other technologies we take for granted. Planning in advance will also save lives.

Be prepared to close your casino or at least a significant part of your property. There will not be enough security personnel available to do all that will need to be done. Does your emergency operations plan consider this?

The onslaught of press will be huge and problematic if not planned out where to stage for press conferences, satellite trucks, and controlled release of information through designated managers.

The long-term effects of an active shooter event need to be considered in advance. The years of press coverage, employee welfare and morale, business continuity and the loss of revenues will all need to be managed long-term. Having a committee of executives to meet regularly post-incident solely on the topic would be recommended.

Team members will be affected in different ways. From extreme physical and mental trauma to just being scared will be of concern, and need to have a well-planned response. Counseling, employee assistance programs, time off and all the things that occur after a significant event will impact operations in some form.

History also tells us that litigations will surely follow, and also need to be carefully managed long-term with legal and risk departments. A good plaintiff’s attorney will argue that an active shooter event is foreseeable and that you did not do what was reasonable under all of the circumstances. If a jury believes that your casino failed to do some simple basic planning to mitigate a shooting event like those that occur regularly across the United States, it could prove costly, from negative public relations to punitive damages.

A comprehensive training program, documented action plan with deliverables, and table-top exercises will save lives and mitigate all of the negatives that occur. Make sure you can honestly say to the families of your employees that you did everything possible.