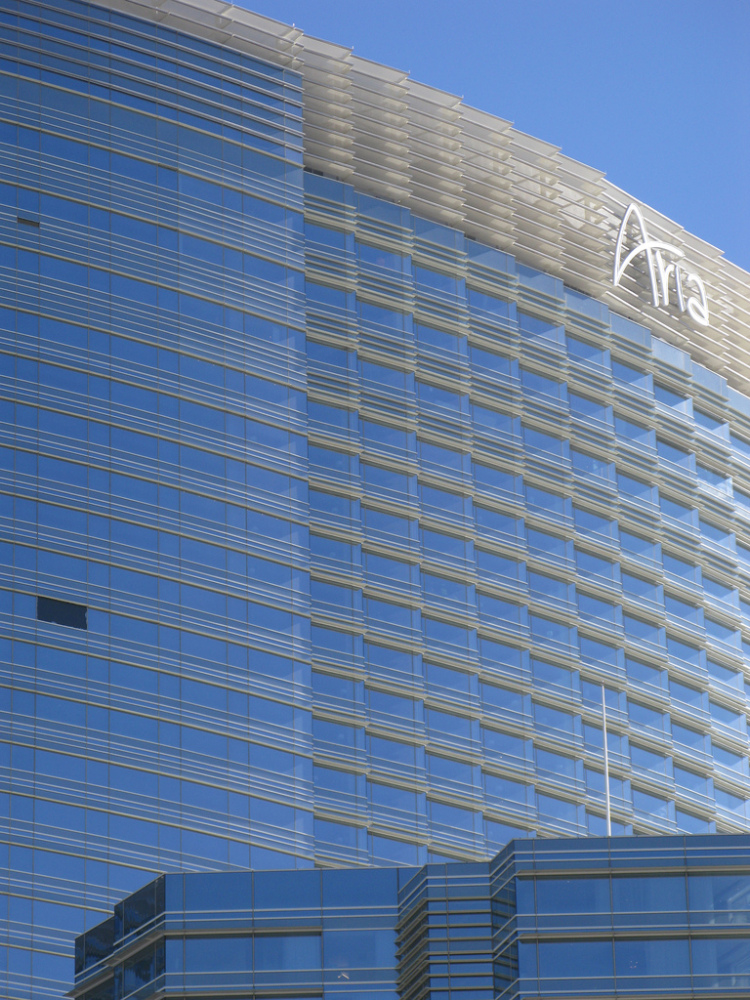 Editor’s Note: Willy Allison, president of World Gaming Protection and publisher of the Catwalk newsletter, visited the new Aria Casino Resort in Las Vegas in January to find out how the surveillance department will oversee the activity in the massive casino resort.

Over the years, frequent visitors to Las Vegas have become accustomed to the ever-changing landscape that is the Strip. It’s not unusual to see a new mega-resort pop up from the sand of the desert floor, or from the rubble of grand old gambling palaces. But today, as you fly over Hoover Dam and start your descent into the 15th busiest airport in the world, you can’t help but notice-there’s a new town in town.

CityCenter is the mega of all mega-complexes ever to be built in Las Vegas. Since construction began in 2005, Las Vegas residents have watched the massive glass towers rise above neighboring properties like royal chess pieces beside their pawns. Reported to have cost over $8.5 billion, the complex is set on 67 acres on the Strip and consists of four hotels, a casino, residential condominiums and a retail and entertainment district.

The project is the largest privately financed development in U.S. history, and is a partnership between MGM Mirage and Infinity World Development Corp., a subsidiary of Dubai World. CityCenter is adjacent and connected via monorail to the Strip’s first $1 billion dollar property Bellagio, which opened in 1998 and is also owned by MGM Mirage.

Located in the center of CityCenter is the Aria Resort & Casino. Aria opened on December 16. The spectacular fireworks display was a fitting celebration for a project that employed thousands of workers over the last few years and will provide thousands of jobs and a much-needed boost to a depressed local economy. The casino opening was the last in Las Vegas for the decade. Some skeptics are saying it could be the last for a long time.

Aria stands 61 stories high and has 4,004 hotel rooms. The casino floor has 145 table games and 1,940 server-based slot machines. Under the 150,000 square feet of gaming space, somewhere in the maze of back-of-house offices and support functions, is the casino surveillance operation.

Fresh off a successful opening, Whiting was kind enough to give me a tour of his operation and answer a few questions I had about his new surveillance baby.

Willy Allison: How big is your monitor room in terms of square feet, number of consoles and monitors?
Ted Whiting: The surveillance monitor room at Aria is approximately 5,000 square feet. We have 64 total monitors and seven individual work stations. We also added a separate viewing room for other departments to review video without disrupting our primary operation.

Can you explain the rationale behind the design of the room?
I was very lucky with my surveillance room, in that I was involved with the design from right after the time we broke ground on the CityCenter project. My very early involvement from the ground up enabled me to create an environment that was sure to promote productivity. We took a very ergonomic approach to the surveillance room’s design. We were able to get temperature control in the room, so we can keep the room temp at the perfect 72 degrees. The operator consoles are built specifically for video observation, and the wall monitors were all mounted at the optimal distance based on the size of the monitor and their distance from the operator. Comfortable operators are the most productive operators.

How many cameras are in the system, and what type are you using?
We put several final candidates through the wringer before we settled on Honeywell as our CCTV manufacturer. When we first began this project in 2006, most people assumed we would be building an IP camera CCTV system. The problem was that in 2006 (and really until late 2009) IP cameras just did not compare to analog cameras. What I mean is that IP cameras were more expensive, they did not provide the same image quality as analog, and we had no idea how long they would last before needing repair or replacement.

We felt we should use the best of the mainstream technology (analog cameras) and blend in the things that work well from the IP world. The IP cameras we are most excited by are the 360-degree cameras we have throughout the casino floor. These cameras allow us to record events on nearly 100 percent of the casino floor, something that has never been done before. We also installed megapixel cameras at choke points in the casino. These cameras will provide ID shots, better than we have ever had in the past.

We are currently beta-testing a new fixed HD IP camera from Honeywell. This camera provides a true HD image that works great in even our low light conditions. The detailed image is what grabbed me initially, but it was the fact the data streams at 2.5 mbps that really got me excited-2.5 mbps is the same as an analog camera after it has been encoded. This means we do not need to buy any additional storage to use these vastly superior cameras.

Who were the installer, consultant and suppliers?
Honeywell is our main manufacturer, but we also bought cameras from Grandeye and Arecont. North American Video is our integrator.

Can you describe how the system works from camera to monitor?
The architecture of this CCTV system is fairly unique to Nevada casinos, but I think will serve as the model for most future camera projects. The system was designed as “video on demand.” What I mean is rather than bringing every individual analog camera feed back to the surveillance equipment room, we bring back only what is called for on the front monitors. We might have 300 analog cameras landing in a comm room, but only 64 come back at once. Why does this work? Since we have only 64 monitors, we will never need more than 64 live video feeds at one time.

All the fixed cameras are still being recorded digitally in the head end, so there is no loss of functionality. The surveillance operators don’t even know the system was configured this way; to them the process is exactly like what they have used for years.

The advantage of this type of configuration is that we saved money on hardware and labor by eliminating all those direct one-for-one connections between the comm rooms and the surveillance head end. As a side benefit, troubleshooting was made easier for the technicians. This configuration saved us valuable space in the equipment room as well.

What challenges in general (technical or operational) have you had to overcome to set up such a large operation?
There were, of course, many challenges, ranging from making sure we hired the best people to personally verifying the conduit was going to the correct comm room. I found the experience of building a CCTV system literally from the ground up fascinating and extremely educational. I now understand what architects mean when they ask for “camera dimensioning.” They didn’t want a camera spec sheet; what they were looking for was where I was going to cut holes into their beautiful ceiling. I also learned a lot about LEED certification, purchasing and contracts.

When designing the system and camera
layout, what considerations did you have to take into account to ensure all areas of risk were covered?
My team and I have been involved with surveillance for many years, so we started with a pretty good idea of what and how to protect our assets. Also, early in the process of designing camera coverage, I consulted with the Nevada Gaming Control Board. I asked them what they expected and then set out to do more.

We did not want to just do what we have always done. We took this opportunity to push the technology envelope as far as we could. We looked at existing CCTV systems and asked, “What do we wish we had?”

Our first wish did come true, with the 360-degree cameras. Now, rather than recording every PTZ (for pan-tilt-zoom) on a multiplexer at 1.9 frames per second and covering only a fraction of the casino floor, we use technology to cover almost 100 percent of the floor at double the frame rate and half the cost.

We were able to meet with the slot kiosk manufacturer early on, and had cameras installed inside the kiosks before the machines were installed.

We have an IT team working with us to get the most we can from the various data sources on the property. We have F&B point-of-sale monitoring linked to our video, and will soon use that same concept with casino points of sale.

Can you give any advice to any other surveillance directors thinking about setting up a mega-casino surveillance operation?
The best advice is to stay personally involved. You have to “walk the job.” Get out to the field while there is still time to correct mistakes. Also, you need a good camera/IT tech on your team from the beginning. This is the person who will catch the things that you miss.