Land into trust for gaming could be much more difficult 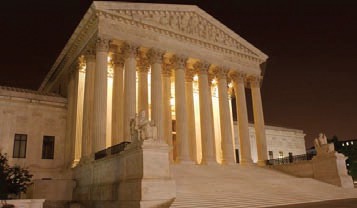 A U.S. Supreme Court decision that allowed a private citizen to sue to try to close an Indian casino could have a drastic effect on Indian casinos and casino proposals all over the country, because it is the first time the court has said an existing casino could be challenged and possibly closed. Indian gaming is a .73 billion industry.

Some experts in tribal gaming law say the decision could affect the process by which the federal government takes land into trust for tribes, because it allows those decisions to be challenged after the fact.

Most analysts agree that the decision will open the way for more legal challenges to Indian casinos, if for no other reason than it extends the statute of limitations on the judicial review of fee-to-trust land transfers from 30 days to six years. One tribe that has taken last into trust and built a casino within that period is the Nottawaseppi Huron Band of Potawatomi, which took land into trust in 2006 for its Firekeepers Casino.

The decision concerned the Gun Lake casino in Michigan, a $160 million casino resort 20 miles from Grand Rapids that was built and is managed by Station Casinos. David Patchak, a neighbor of the casino, challenged the way in which the Bureau of Indian Affairs took 147 acres into trust for the Gun Lake Tribe, which was recognized in 1999. Patchak’s claim argued that the land could not be put into trust because the tribe was recognized after 1934, a principle that the high court had affirmed in its 2009 Carcieri v. Salazar decision. The difference was that the Gun Lake casino had already been built when it was challenged.

Not all Indian casino projects would be affected by the ruling. An example is the $433 million casino resort proposal by California’s Federated Indians of Graton Rancheria, which would not be affected because its land-into-trust process was authorized by an act of Congress in 2000. Station Casinos is also a principal in this casino project.